McQueen’s character in Bullitt is often remembered for two things: his handling of the green fastback Mustang during the car chase and the iconic shooting jacket and rollneck jumper he wore. Just prior to that sequence, we see Bullitt pulling an all-nighter at the hospital after the fatal shooting of the witness his men were protecting.

Very realistically, McQueen/Bullitt shows up at the scene in a casual shirt and slacks with a high-fastening and thick cardigan over it. This layered look makes sense for a cop who is pulled out of bed in the middle of the night without knowing what he’ll be doing or where he’ll have to do it. Additionally, the sweater allows a great shield against the bitterly cold spring nights of San Francisco.

An important takeaway here is that cardigans should not be considered solely the domain of old men and hipsters; a classic cardigan can add a diverse and masculine dynamic to any look. (The gun underneath helps with the whole masculinity bit too.)

Steve’s Mustang squeals to a stop in front of the crime scene early in the morning. Our titular hero leaps out of the car in his attire for the long night ahead of him, a bulky brick red cardigan over a dress shirt and slacks.

The cardigan’s material appears to be a thick and fuzzy ribbed wool, which has a generous fit but still presents a strong and sleek silhouette. Five brown leather cluster buttons fasten the lower half, covering the waist, with a brown leather inner placket lining. An identical button, up on the right side of the shawl collar, fastens the sweater over the chest if need be. For Steve on a chilly spring night in San Francisco, the need indeed be.

The many expressions of Steve McQueen.

When totally buttoned, the cardigan leaves only a small V-shaped opening at the top, which Steve’s shirt fights to show through. The raglan sleeves are cuffed at the wrists.

Two lower open pockets extend over the waist, not practical for carrying much of substance. Steve manages to fit a couple of brown gloves into his right pocket though, and for that we salute him.

Steve McQueen is the second most badass person to ever rock a cardigan on screen. (The most badass is obviously Mr. Rogers.)

His shirt is very pale blue with a darker blue micro-check. The subtlety of the check makes the shirt appear solidly light blue from a distance. It has an unbuttoned spread collar and large clear plastic buttons down the front placket. The barrel cuffs are worn buttoned or rolled up. The shirt also has a breast pocket, although it isn’t utilized during the scenes and thus appears to be very unloved.

Left: Steve pensively wonders if he will EVER get to drink a glass of milk.
Right: Satisfaction.

From the waist down, Steve sports the exact same ensemble (I still feel weird using that word to describe clothes) as he does in the shooting jacket-and-rollneck scenes, a pair of charcoal slacks with plain-hemmed bottoms, suspended by a black leather belt with a silver squared clasp.

His mid brown suede desert/chukka boots are also back, although not seen very clearly and thus not helpful for the Hutton’s vs. Tod’s debate. However, they have been confirmed as a pair of “brown saddle” Hutton’s Original Playboy 2-eyelet boots, so that’s the information I’m going on. As in the later scenes, they are worn with thin black ribbed socks.

Steve’s watch – worn on the right wrist – is also the same, positively identified as a civilian Benrus Series #3061 with a round polished steel case and black dial, fastened around his right wrist with a well-worn brown leather strap. His thin gold necklace is barely visible under the shirt.

Perhaps just to throw off any budding sartorial bloggers 45 years later, Bullitt carries a brown overcoat when getting into the ambulance at the crime scene. At first I wondered if this was the brown shooting jacket from later in the film, but it is definitely an overcoat and slightly different in color. 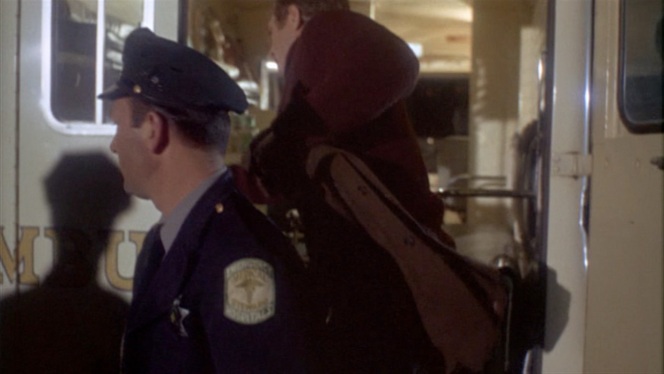 Steve McQueen and the Case of the Mysterious Brown Overcoat.

Although the favorite scenes of the movie are typically the car chase and the final airport pursuit, this sequence is often regarded to be one of the most realistic in film. Filmed in an actual hospital with actual doctors, the medical procedures shown in Bullitt offer a greater verisimilitude than in some media about medicine, such as E.R. and Grey’s Anatomy where doctors all just sleep with each other and shout dramatically after losing a patient.

Additionally, despite being more of a renegade than his superiors might like, Lt. Bullitt is still a realistic renegade cop. He’s not Martin Riggs, drawing his gun when he feels like looking at something metal. Even when in pursuit of a suspect, “Ice Pick Mike” (according to the soundtrack), he keeps his hand over his holster but never draws. This is the mark of a responsible and well-trained policeman.

Main point, don’t be a dick. 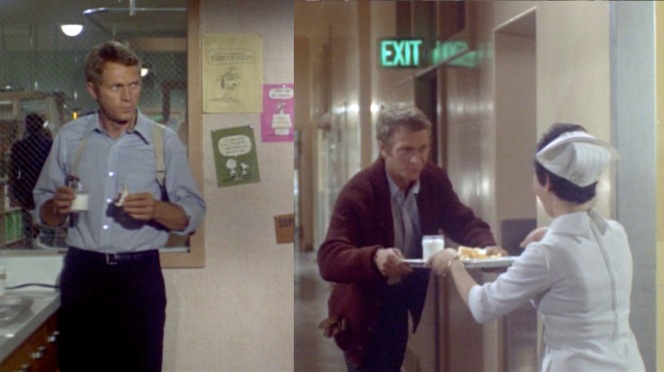 Also, there’s no shame in enjoying a glass of milk and a PB&J.

A good look but not very practical for your morning jog. Be advised.

Bullitt’s look is smart for San Francisco, but is also good for any place with unpredictable weather.

If you’re looking for a Steve McQueen-style cardigan to fill out your collection, Iconic Alternatives has done some great work finding modern McQueen-esque options.

Bullitt’s revolver, a 2″-barreled Colt Diamondback in .38 Special, isn’t seen as clearly in these scenes. I offer up a little more detail about it in my prior Bullitt post. Since we see the holster best in these scenes, I’ll instead focus on that.

A snubnose Colt Diamondback, similar to the one carried by Bullitt.

McQueen based his character on Dave Toschi, a San Francisco homicide inspector who also inspired Clint Eastwood in Dirty Harry. Toschi had made himself famous for his work on the Zodiac killings shortly after Bullitt was made and would later be portrayed by Mark Ruffalo in the 2007 film Zodiac.

As part of his preparation for Bullitt, McQueen met with Toschi and was impressed enough by his armament that he had his own copy made of Toschi’s custom fast-draw shoulder holster. McQueen’s was later put into production by Safariland and is known as the Model #19 or “Klipspringer” shoulder holster. 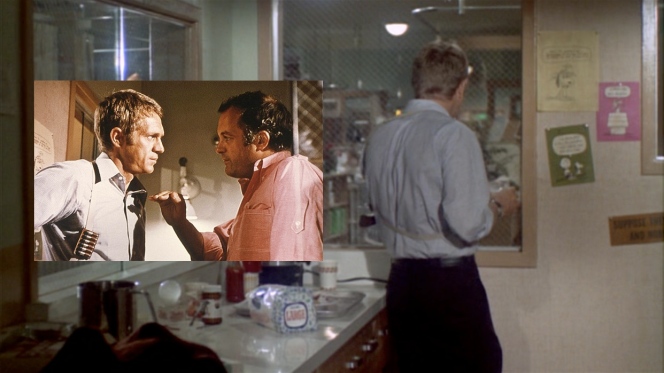 The back part of Bullitt’s shoulder rig is very minimalist. In the inset photo, McQueen wears it while taking direction from Peter Yates.

Steve’s is a light brown right-hand draw holster, naturally worn under his left armpit. The cream-colored straps extend over both shoulders with a small light brown leather reload of six .38 Special rounds is carried on the right side. The holster provides a fast and natural draw and conceals cleanly underneath a jacket or sweater. The one downside is that the weapon is aimed directly at the wearer’s armpit, but with a well-maintained gun that isn’t drawn with a finger on the trigger, this shouldn’t be a problem. Otherwise, Darwinism steps in.

Look, you work your side of the street, and I’ll work mine.