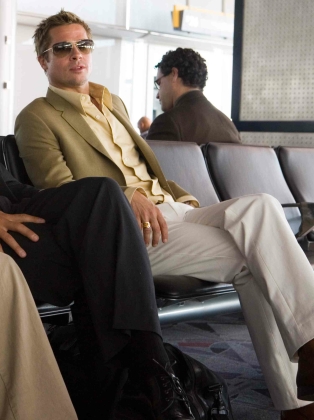 Brad Pitt oozes cool as “Rusty” Ryan in Ocean’s Thirteen (2007) in Vegas’s McCarran International Airport. Hey, Sopranos fans – am I crazy or does the guy sitting behind him look exactly like Meadow’s friend Noah from season 3?

Possibly still smarting from Danny’s remark about “Ted Nugent’s shirt” at the end of Ocean’s Eleven, Rusty has relatively toned down his attire for Ocean’s Thirteen. I say “relatively” because he still wears white suits and shirts that reflect better than most mirrors, but it is also primarily solids, with a subtle stripe thrown in occasionally.

For much of Ocean’s Thirteen, and especially the final scene, Rusty embraces the summer climate and wears a lot of bright earth tones. It is a very cool look and, as usual for Brad Pitt, is risky for the standard layman to execute successfully. However, Rusty’s confidence and – dare I say – swagger work in his favor and even Roman Nagel has to admit early on that Rusty “has style”.

At the airport after the successful con/heist/robbery/double-cross, Rusty sits back and relaxes in a gold-centric outfit, indicative of his newly acquired mega-wealth.

The single-breasted sport coat is a deep mustard gold, a very modern-but-retro look. The notch lapels are moderately sized and detailed with stitching on the edges. Two dark brown horn buttons fasten in the front, if Rusty was the closed-jacket type (he typically isn’t), with three smaller buttons on each cuff. There is a breast pocket and straight flapped hip pockets. The jacket keeps cool in warm weather with double side vents in the rear.

Rusty travels wisely with a large but flexible carry-on bag and easily removable layers with plenty of pockets.

Rusty’s shirt is the same yellow gold shirt worn earlier when arguing with Terry Benedict in the hotel room about the diamonds. Like the rest of his shirts, all made for Brad Pitt by Anto Beverly Hills, it has a large point collar. He wears it very casually, with the first two white buttons unbuttoned and the rest fastened down a plain front. The cuffs are also worn unbuttoned, a risky look but not quite as risky as his unfastened French cuffs in other parts of the film. With Pitt, it looks cool rather than lazy. 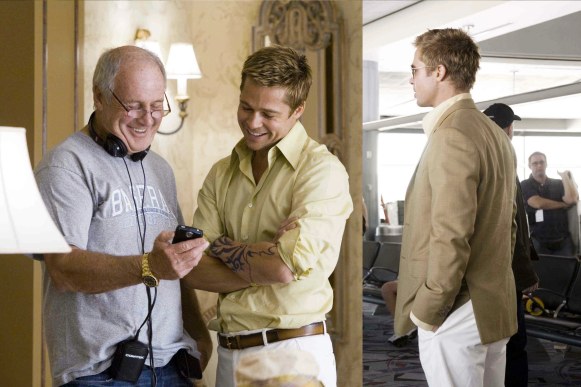 A behind-the-scenes set of photos provides the best shot of Rusty’s shirt and also gives us the invaluable bit of information that producer Jerry Weintraub, who also cameos as Denny Shields, wears a gold Rolex.
The photo on the right also included Weintraub and Clooney and can be found available online. Note the vents and jacket detail of Rusty’s sport coat.

The trousers are a pair of off-white flat front chinos with slash side pockets and plain-hemmed bottoms, possibly the “skinny white Versace jeans” referenced in a May 2007 Daily Mail article about the film’s style. There are belt loops around the waist, with the two rear center loops intersecting at the bottom to form a “V”.

I didn’t note the similarities in the, uh, surroundings of this photo set until I put it together.

Rusty wears two Prada belts in the film, a black for his darker suits and a brown for his earthtones. He wears the latter in this case, a leather belt with dark brown edges fading to a medium brown throughout the center. The belt fastens in the center with a gold squared single-prong buckle.

His accessories are, of course, gold. Throughout the movie, he’s worn a thin gold necklace with a gold pendant, not seen very clearly here but definitely present. He also wears a gold ring with a brown stone on his right ring finger. He switches this up during the movie, sometimes wearing it on his left middle finger. Personally, I think middle finger rings can be uncomfortable, but then again I wear mine on my index finger and people think that’s weird.

Rusty’s ring is best seen at the airport while conversing with Danny.

In the airport, he wears his yellow gold Rolex GMT Master II on his left wrist, having worn it on his right wrist for much of the earlier part of the film. It has a black bezel and dial and is worn on a gold Oyster link bracelet.

Rusty’s Rolex is best seen while putting coins in the slot machine before the “reverse big store” pulled at the Bank on opening night. When I do that article, you’ll see the watch much more clearerer.

His sunglasses are Oliver Peoples, which is Brad Pitt’s personal favorite according to all sources. They are the “Strummer” model, still available for $365 on the Oliver Peoples website. The site describes them as a “sporty, double-bridge, semi-rimless sunglass… crafted with lightweight, hypoallergenic titanium and flexible beta-titanium temples. The lens shape is a classic aviator, while the silicone nose pads and ultra-thin temples provide comfort and fit. Fashion-based gradient lenses offer 100% UV protection.” The pair worn by Pitt in the film are gold with an olive gradient lens. 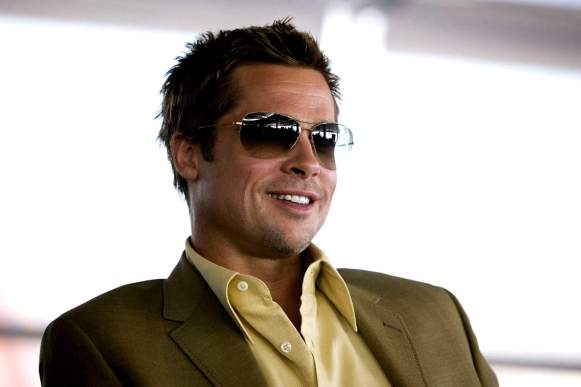 Oliver Peoples must have accounted for about a 5000% increase in sales when they saw Brad Pitt wearing a pair of Strummers on screen.

There are some similarities to the outfit Rusty wears earlier when he and Danny are planning the heist with Roman. However, Rusty wears a white-on-white striped suit in that scene, with frogmouth pocketed trousers. The gold shirt in that scene was also shinier and golder than the yellow-gold fabric at the airport and hotel.

At the airport, Rusty breaks his traditional habit of eating and/or drinking something in almost every scene. However, it’s fair to say that there is likely a mini bottle of vodka and some peanuts waiting for him on board. He carries shockingly little luggage for a man with so many costume changes, carrying just the same well-traveled brown duffel bag that he carried on in the opening scene. He may check a bag or two, but – like me – Rusty doesn’t seem like the type who would trust an airline with his wardrobe. Also, it’s hard to picture Brad Pitt waiting idly at a baggage claim.

Additionally, if you’re be traveling with friends, make sure they’re able to dress equally as well as you. You don’t want two guys in sharp looking suits next to a guy slumped in an Ed Hardy T-shirt and cargo shorts with duct-taped flip flops.

If you’re looking for some take-off music, the soundtrack utilizes very cool music throughout the whole film, but this great scene cuts to the end credits with a jazzy track, “Soul Town” by The Motherhood, the fourth track from their 1969 album I Feel So Free, released by United Artists. Apparently, they were a German band who released the same album in the U.S. under the title Back in the Grass.

And, this goes without saying, if a guy’s been having some hard luck, try to rig a slot machine so he comes away with $11 million. It’s just a nice thing to do.

This is pretty simple. White pants are difficult for some men, especially with larger builds, to pull off, but anything goes after Memorial Day. 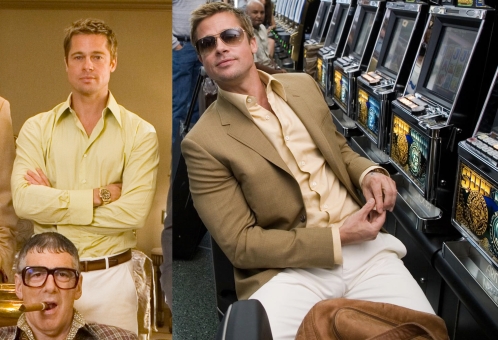 Buy the movie. Although it does help if you’ve seen the first two.

Pitt stings Clooney with a meta-burn, until Clooney turns it around right back on him.

Danny: (mocking Linus) Alright, well… I’ll see you when I see you.
Rusty: (re: Clooney’s Syriana weight gain) Hey, next time? Try keeping the weight off in between.
Danny: (re: Pitt adopting 900 kids with Angelina Jolie) Hey. Settle down. Have a couple of kids.

Just a nice reminder that you’re never too rich or too famous to take a jab at your friends.