As I mentioned in the last Layer Cake post, this British crime drama (some could call it a black comedy) was seen as Daniel Craig’s “audition tape” for the role of Bond. He was a sharply-dressed, sympathetically violent, and stoic Londoner who differed from Bond only by being a gangster instead of a secret agent. Also, Dan’s Layer Cake character was also much better about protecting his name than Bond.

His staple outfit was a very non-Bond t-shirt and jeans, although he did suit up from time to time. Towards the end of the film, Craig’s character arranges a sting to punish the lower thugs and appease the bosses. This restoration of social order in the underworld gives the title its meaning. As the boss, played by an excessively tanned Michael Gambon, states:

Welcome to the layer cake.

For the film’s denouement, Dan’s casual look consists of a navy blue pinstripe jacket and jeans. Based on the worsted material and the cut of the single-breasted jacket, we can deduce that it has been orphaned from a suit. The two-button jacket has notch lapels, deep double vents, and flapped hip pockets but no breast pocket. The four-button cuffs appear to be functional “surgeon’s cuffs”, so named for their apocryphal origins on the coats of battlefield doctors.

When not wearing a T-shirt instead, Dan wears a white cotton long-sleeved shirt that takes plenty of abuse due to the action-based nature of these scenes. The spread collar closes at the neck with two buttons as do the barrel cuffs.

Dan’s shirt gets more and more rumpled as he gets more agitated throughout the day.

Unlike much of his casual wear in Casino Royale and Quantum of Solace, Dan matches his belt and shoe leather. Holding his jeans up is a thick dark brown leather belt with edge stitching and a large brass rounded square two-prong buckle.

A pair of versatile leather boots like these are good for both casualwear and dressier attire.

Dan’s accessories are a pair of sunglasses and his wristwatch. The glasses are either dark brown or black plastic with dark lenses with what appears to be the Persol logo on the sides. His watch, possibly a Rolex Datejust, is stainless with a black dial and bezel.

What do we think, gang? Persol?

Dan sports a couple different looks in Layer Cake, mostly variations of a jacket, shirt, jeans, and boots. This one combines blues and browns to look good and sharp without betraying the “no brown in town” rule to which some Britons still adhere: 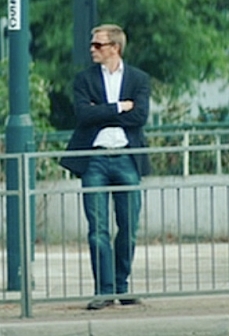 XXXX also swaps out the white shirt for a light gray t-shirt, which was a better fit with his leather jacket.

Everyone wants to walk through a door marked “private.” Therefore, have a good reason to be affluent.