To Catch a Thief is a classic Hitchcock production featuring two of his favorite stars – Cary Grant and Grace Kelly – in a romantic crime comedy-thriller set against the exotic backdrop of the French Riviera. It was one of Grace’s last films in her too-brief five-year acting career before becoming Princess of Monaco.

Grant and Kelly’s undeniable chemistry is still remarkable sixty years later. While legendary Hollywood costumer Edith Head dressed Princess Grace for the film, it’s believed that Grant provided most of his own attire as he was, after all, Cary fucking Grant.

After looking very sharp in a midnight blue dinner suit, Grant continued to impress by donning a debonair gray suit for both an office visit and a funeral. While it’s a general rule of thumb that most men should only wear dark suits for funerals, Grant’s choice is a natty summer alternative to the more morose black or charcoal suits around him. (Plus, he’s attending a criminal’s funeral so that scratches a few rules off of the list.)

Robie wears a great wool suit in a warm gray semi-solid fabric that accentuates the deep tan Cary Grant achieved while filming in the south of France. Especially when he arrives at the funeral and mourns among some more diminutive cast mates, Grant stands out as the tall, dark, and cool one. The eye is naturally drawn to Robie in his stylish gray suit, blurring out the dark suits and poor shirt collars around him.

This suit, the height of mid-1950s male fashion, is timeless and would translate onto a modern gentleman almost impeccably… not that anyone could wear a suit like Cary Grant. 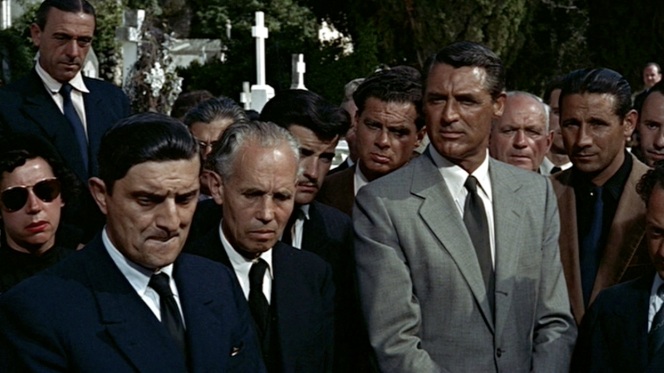 The single-breasted suit jacket has a 3-roll-2 button front, which Grant keeps fastened with just the center button. The notch lapels are about as fashionably large as ’50s lapels would get, but they totally avoid the excessive size of ’70s lapels. The dark gray-toned 3-button cuffs match the buttons on the front.

The jacket is neatly tailored with natural shoulders, roped sleeveheads, and a single rear vent. There is a welted breast pocket and flapped hip pockets.

Few suits can translate so nicely between a funeral and a business office.

Grant’s double reverse-pleated suit trousers rise high on his waist and are generously cut through the legs. The front fastens with a single button on an extended waistband tab, and there are additional buckled side adjusters on each side. The trousers have cuffed bottoms (or “turn-ups”) and on-seam side pockets, which Grant often places his hands in for an added touch of casual debonair cool.

Cary heads over to give Princess Grace a piece of his mind.

On his feet, Robie wears black leather moc toe penny loafers with thin black dress socks. The term “penny loafer” dates back to American prep schools of the era when students would place a penny or two in the diamond-shaped slit of their shoe, either to make a fashion statement or make an emergency phone call.

Loafers were still a casual option in the 1950s as men still preferred oxfords with business suits, but John Robie is a devil-may-care alpha male who makes his own rules… much like James Bond who also wore “black casual moccasins” in Ian Fleming’s book series.

Honestly, Cary looks more comfortable in a suit than I think I’ve ever felt in the baggiest sweatpants.

A classic dresser like Cary Grant rarely – if ever – deviated from a white shirt with his suits. This is no exception, as Robie wears a white shirt with button cuffs, a front placket, and stitched edges visible on the large, soft point collar. His tie is dark gray silk in a four-in-hand knot, just long enough to meet the waistband of the trousers. This is considered to be the most appropriate tie length for men, but – even on someone with Cary Grant’s 6’2″ frame – the high rise of his trousers makes for a short tie length.

Other than uniform-requiring roles in films like Destination Tokyo or Father Goose, Grant earned his reputation for style both on and off screen. As he himself said about his on-screen look:

Generally I wore simple, tasteful clothes. The same kind of clothes I wear off screen.

“Simple” is misleading; Grant’s suits were simple in their elegance. No opportunities for ostentatiousness through abundant accessories or flashy colors; just a strong look in a great suit.

Note the differences in the details and the cut of each suit, indicating just how much men’s fashion changed over four short years.

Hitchcock obviously understood just how well Cary Grant could pull off a sharp gray single-breasted suit. Four years after To Catch a Thief, he once again outfitted Grant in gray – Glen Plaid, this time – for his role as Manhattan ad exec Roger O. Thornhill in North by Northwest. The North by Northwest suit has been lauded as one of the greatest suits in cinema history, and it is certainly worth comparing the looks.

A popular maxim exists, saying “the suit makes the man.” In Cary Grant’s case, this was always the other way around. This is a timeless and stylish look for a European summer, but don’t expect to look exactly like Cary Grant.

For what it’s worth, I never stole from anybody who would go hungry.