Car Week continues today with a recommendation from Craig, a great BAMF Style commenter who also was kind enough to send a DVD copy my way this year!

The Last Run finds George C. Scott, freshly awarded for his Oscar-winning performance as General George S. Patton, playing an aging ex-mob driver living in seclusion in Portugal. He is tapped for “one last job” – as so many retired movie criminals are – to drive a fugitive and his young girlfriend into France. What follows is an underrated action piece that was accurately tagged “In the spirit of Hemingway and Bogart”.

Harry wears a well-worn dark brown leather jacket with a four-button front and knit blouson-style waistband around the back. There is a slanted hand pocket on each side of the jacket that starts around the same line as the 2nd button down and slants toward the back.

The distinctive jacket’s knit cuffs are a lighter shade of brown than the rest of the jacket and are folded back over the wrist. The same brown knit is visible on the inside of the collar, about 1″ from each of the edge, best seen when the collar is folded over.

Underneath, Harry channels Bullitt with a dark mock-neck jumper. This black ribbed wool sweater has long sleeves with ribbed cuffs that poke out from the jacket.

Harry settles himself in a hotel room. Don’t forget the blue jacket and gray polo hanging… you’ll be seeing those later.

For a warmer day – and a visit with Monique – Harry wears a lightweight orange short-sleeve button-down shirt. The shirt has a front placket, button-down collar, and a breast pocket for his Marlboros.

Harry sports a pair of flat front khakis with a black leather belt. The trousers have straight side pockets, jetted rear pockets, and plain-hemmed bottoms.

Harry’s getaway service not only includes driving you across several countries, he’ll also light your cigarette for you!

Settling in for a comfortable night.

Harry’s underwear is all white with a cotton crew-neck undershirt and a pair of white Jockey briefs with a thin gray stripe around the waistband.

Harry in various states of undress.

We get a few good looks at Harry’s stainless wristwatch, so someone with a better eye for vintage watches than I may be able to identify it. The silver dial is large and round with two sub-dials, and it is worn on a steel bracelet.

Harry also wears his plain gold wedding band on the third finger of his left hand.

The film’s tagline mentions the obvious Hemingway and Bogart connections, and it’s not kidding. We’ve got a grizzled, down-on-his-luck American hiding out in an exotic but lonely European locale with copious amounts of whiskey and cigarettes keeping him company… not to mention his trusty pistol.

Harry takes care of his essentials.

Harry Garmes’ pistol is a Star Model B, a Spanish 9mm copy of the 1911. While the Star Model B was often chosen during the era because the 9mm round cycled blanks better than a standard 1911’s .45 ACP round, it also makes sense that Harry would carry a Spanish pistol while hiding out in Portugal and Spain. Of course, being the old school American he is, Harry would still opt for a pistol based off of the classic 1911.

I had always thought Harry’s preferred whiskey was Dewar’s White Label blended Scotch, but closer inspection of the label yields a different result… although I’m not 100% sure what that is. He definitely smokes Marlboros, though.

Harry rocks a relatively timeless look of brown leather jacket, dark sweater, and khakis for the first stretch of his new gig.

After almost ten years retired from the mob, Harry Garmes owed it to himself to get a flashy car for cruising around the scenic European countryside. He opts for a rare 1957 BMW 503 convertible, one of only a few hundred that were manufactured during the 503’s three production years.

Harry enjoys a jaunt through the roads of Portugal.

BMW introduced the 503 in 1956 as its first post-war sports coupe, developed in tandem with the 507 roadster with an eye of breaking into the American luxury car market and directly taking on the country’s response to the Mercedes-Benz 300SL. Industrial designer Albrecht von Goertz was contracted and submitted a clean, modern design that would eventually become the 503. Although the 507 was only a roadster, the 2+2-seater 503 was designed to be a coupe or convertible.

Between May 1956 and March 1959, 412 BMW 503s were built – 139 of them were convertibles and became the first European convertible with an electrically operated top. Much was borrowed from the earlier BMW 502 sedan, including some styling points and a 3.2L eight-cylinder engine, although the 503 was boosted with two carburetors and a chain-driven oil pump.

Attractive though it was, the BMW 503 quickly became noted for its sluggish handling and relatively low acceleration of 13 seconds from 0-60 with a top speed around 115 mph. Neither the 503 nor the more popular 507 sold enough to make a profit by the time production ended in March 1959. 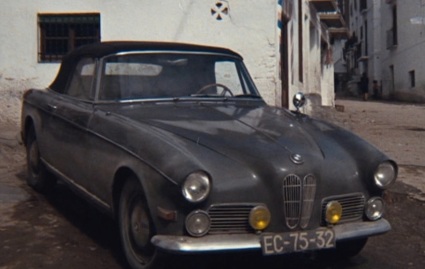 Harry’s supercharged BMW 503 is fitted with Portuguese license plates EC-75-32, as well as a secret compartment under the dashboard for his pistol. Harry spends much time focused on tuning his car, leaving no doubt that he’s in the right profession. The Last Run is notable among BMW fans not only for the prominent appearance of the relatively rare 503 but also the authenticity of the driving scenes and sounds.

Monique: Are you Catholic?
Harry: In the old days, before the fall, I owned a few shares.