For the 00-7th of July, BAMF Style is traveling back ten years (or at least two days shy of ten years) to Daniel Craig’s first outing as James Bond in Casino Royale. The agent finds himself supposedly “on holiday” at One&Only Ocean Club in the Bahamas, secretly following up on a lead for his investigation.

Bond’s Caribbean getaway appropriately leads to cocktails, beautiful women, and a game of high-stakes – or “Aston Martin stakes” poker – in an exotic locale.

Unlike earlier Bond films that found 007 waltzing into a casino wearing a tuxedo regardless of the actual formality, Craig’s Bond dresses comfortably and practically while still looking fashionable for an evening round of poker at One&Only Ocean Club.

Bond appears to be wearing a basic black button-up shirt untucked with a pair of taupe linen trousers when he strolls into the gambling area. However, information from the Absolutely James Bond forums (1 2 3 4) reveal that plenty of work from the wardrobe team went into modifying the shirt to look just right for this scene.

The black soft polyester long-sleeve shirt worn by Daniel Craig in Casino Royale was from Alfani, a Macy’s house brand. People with costume cards or who have seen the shirt firsthand describe its woven “microfiber” texture that feels almost like suede or velvet. Costume designer Lindy Hemming even reveals the shirt’s “heavy navy blue” color, although there is still some forum discussion. Since the shirt looks black on screen, it will be treated as a black shirt in this post.

Bond eyes his prey for the evening.

After the shirt was obtained, it still had plenty of customization ahead of it for the production. The shirt originally had a concealed button-down collar with hidden tabs beneath the collar that fixed it to the shirt; both the collar buttons and the hidden tabs were removed. The shirt’s uneven hem, originally meant to be worn tucked in, was tailored to be cut straight square around the bottom with a short notched vent on each side. (This trend led to Chris Riccobono founding the New York clothing company UNTUCKit to specifically cater to men wishing to look fashionable while wearing an untucked shirt. Had UNTUCKit existed when Casino Royale was filmed, we might have seen Bond wearing the “Aubon” cotton oxford shirt or “Valpolicella” soft poplin shirt.)

The final result, as customized for the on-screen shirt, reminds me of a black microfiber Bruno shirt I had also purchased from Macy’s around 2001… more on that below! Like the Casino Royale shirt, it had a non-buttoning soft collar, plain front, breast pocket, and straight hem. (If only the team had reached out to me in 2006, as I would have been more than happy to source my shirt for 007!)

Bond wears Ted Baker “Larked” linen flat front trousers in mink brown. These trousers have slanted side pockets and a patch pocket on the back right. Bond wears them without a belt while casually gambling at the Ocean Club, but he slips on a belt with the brown Armani leather jacket and gray t-shirt when he follows a lead to Miami later that night. The trousers have a straight cut and plain-hemmed bottoms.

Bond makes the most of his brief time with Solange (Caterina Murino).

Although the “Larked” model has been discontinued, 007 wannabes jonesing for a pair of Bond-style linen trousers can try Ted Baker “Linchi”, available in a gray linen-cotton blend for $89 as of June 2016. If you want a summer trouser more along the lines of the mink pants sported by Daniel Craig, Ted Baker also offers the “Tegatin” mini-design cotton trousers for $71.

Bond wears black leather cap-toe oxfords at the poker game and throughout his floor session with Solange that he appears to continue wearing when he heads up to Miami, despite the surprising formality of the shoe with this outfit. They do not appear to be the John Lobb “Luffield” 2-eyelet derby shoes that he later wears with his dinner suit at Casino Royale.

Bond makes a subtle but grand entrance into the gaming area.

Bond wears two Omega wristwatches in Casino Royale; this scene features the sportier Omega Seamaster Planet Ocean “Big Size” 2900.50.91 on a large black rubber strap. The “Big Size” moniker is no misnomer due to the watch’s 45.5mm stainless steel case. The bezel and the dial, covered by a scratch-resistant domed sapphire crystal, are both black.

More information about the watch can be found at James Bond Lifestyle.

James Bond sidles up to the hotel bar as gamblers around him play round after round of high stakes poker. This is the first we’ve seen the agent ordering a drink on-screen. Will it be a vodka martini, shaken not stirred…?

Even the two buffoonish German tourists are shocked by Bond’s supposedly “uncharacteristic” drink of choice!

Much like his untucked black shirt in a casual resort casino, Bond’s choice makes sense given his surroundings. Why expect to always be seeing him in a tuxedo drinking a martini – just because he’s James Bond in a casino? Of course our ruggedly sophisticated hero would order a drink appropriate to the context of the scene, and for a calm summer evening of gambling in the Caribbean, Bond chooses wisely with a Rum and Soda.

The first distinction to make is that this is not a “Rum and Coke,” the highball of choice for college students and obsessive Dr Pepper drinkers. While that ubiquitous campus concoction uses cola, Bond orders his with plain soda water to both neutralize the potency of the rum (keeping his mind sharp while gambling) and to offer refreshing coolness on a warm night.

Mount Gay has been distilled in Barbados for centuries, with the oldest surviving company deed from 1703 dating it as the longest existing rum brand in the world. It has a strong association with sailors, particularly English sailors due to the British influence in Barbados, making it an especially savvy choice for Commander Bond of the Royal Navy Reserve.

I tend to shy away from rum after too many nights serving under Admiral Nelson and Captain Morgan in college, but Mount Gay offers a full flavor without the sweetness or spice that drove me away from rum and into the welcoming arms of whiskey. It was a bottle of Mount Gay Eclipse that reintroduced rum to my palette.

(It’s also worth mentioning that Bond also enjoys some chilled Bollinger Grand Année champagne with Solange back in his room.)

Casino Royale proves that James Bond doesn’t need to sport his finest dinner suit every time he walks into a casino; in fact, he need go no further than the Macy’s men’s casual department!

Iconic Alternatives has a great rundown of affordable options to channel elements of this, such as the Alfani shirt and Ted Baker trousers, and many other 007 outfits.

According to an Absolutely James Bond forum post, the Alfani shirt’s tag read “Made in Vietnam/ WPL 8046” which may help some potential wearers track down the original shirt, although the “WPL 8046” code seems to have been reused on other items for both men and women.

The shirt I purchased around 2001 from Macy’s shares some similarities with the end result of the on-screen shirt worn by Daniel Craig. This Bruno “Sueded Microfiber” shirt is 75% rayon and 25% polyester… not the most luxurious blend, but the microfiber texture keeps it comfortable fifteen years after I first picked it up. 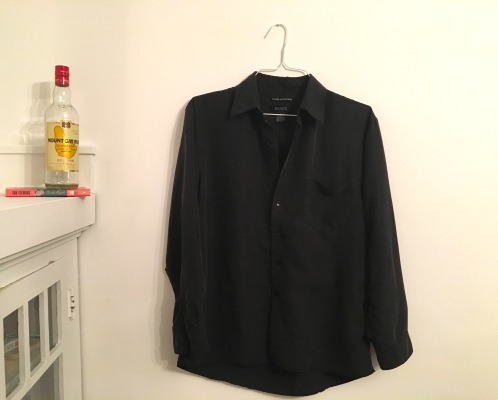 Sadly, only a drop remains of my Mount Gay Eclipse, but I plan on rectifying that with a new bottle soon.

Although it’s a lightweight material, I typically don’t wear it in the summer because the polyester blend doesn’t breathe nearly as well as any of my cotton or linen alternatives. Still, it’s a worthwhile shirt that I didn’t expect to last this long and it comes in handy when channeling Daniel Craig’s James Bond dressing down (or David Duchovny’s Hank Moody dressing up!)