Charles Dance as Justice Lawrence Wargrave in BBC’s And Then There Were None (2015).

Agatha Christie often regarded And Then There Were None to be her best work, and with 100 million sales to date and a classic plot that still builds nail-biting suspense nearly eight decades later, it’s no wonder that this timeless thriller has the reputation that it does.

Born 126 years ago today, on September 15, 1890, Agatha Christie has been listed by the Guinness Book of World Records as the best-selling novelist of all time, no doubt due to her classics like Murder on the Orient Express, Death on the Nile, The Murder of Roger Ackroyd, and – of course – And Then There Were None. I have a personal connection to this book, as I outlined to exhaustion in my post about Aidan Turner’s attire as Philip Lombard in what I consider the definitive adaptation of her finest work.

After more than a dozen adaptations for the stage and screen, Christie’s greatest novel finally received the adaptation it deserved in 2015 when Sarah Phelps was tasked with writing a three-part miniseries for BBC. Craig Viveiros’ direction, Phelps’ writing, and Lindsay Pugh’s costuming all came together with chilling cinematography and a talented cast to deliver this masterpiece.

Charles Dance particularly stood out among the talented cast as the definitive Justice Lawrence Wargrave. Dance perfectly delivered the combination of an authoritative yet charismatic former judge who is both able to hide his obsession with justice behind a “respectable” façade and then, just as convincingly, able to show off his shrewd mechanizations through contemptuous yet humble arrogance as he allows that façade to crumble in front of his final victim. From the mockery of his own “head wound” (“liver and kidneys,” he explains) to telling Vera how she was “quite my favorite… really” with a charmingly smug and almost reassuring smile, you gotta love the way that Dance plays Wargrave’s final confession to Vera as she hangs helplessly before him.

(I know I warned you twice above about spoilers but, come on, if you didn’t realize that Tywin Lannister would be the one pulling the strings here, you ought to know better!)

Unless dressed for dinner in his black tie formalwear, Wargrave spends most of the series wearing a well-cut navy blue striped three-piece suit. The suiting is dark navy lightweight wool with an alternating gray and blue rope stripe.

The single-breasted jacket has a three-button front with traditional English details like padded shoulders with roped sleeveheads, a nipped waist, and flared skirt with ventless back.

As Henry Hill warned us in Goodfellas: “Your murderers come with smiles.” This production photo shows Charles Dance in costume with director Craig Viveiros.

The jacket’s wide peak lapels sharply point to each shoulder with pick-stitching visible close to the edges. A buttonhole is cut straight across through the left lapel which Wargrave uses to clip his eyeglass cord to his jacket. The gold clip is attached to a black cord that loops around the left temple of the gold-framed thin folding eyeglasses in his welted breast pocket. Wargrave’s slightly curved breast pocket is an elegant detail known as a “barchetta” pocket. (Barchetta is Italian for “little boat”… similar to the shape of this pocket.) 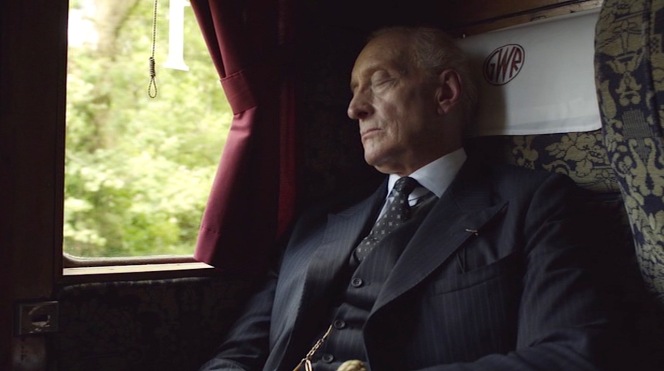 Wargrave dozes off for his introduction to the audience in the first episode.

In addition to the barchetta breast pocket, Wargrave’s jacket has straight flapped hip pockets with a flapped ticket pocket on the right. Each sleeve has 4-button cuffs.

For most of his duration on Soldier Island, Wargrave wears the suit’s matching single-breasted waistcoat. The vest has four welted pockets and a 6-button front with the lowest button left open over the notched bottom.

He wears a gold pocket watch in the lower left welt pocket, connected to an ornate gold fob via a gold link-chain that hooks between the third and fourth buttons of the vest.

The suit’s double forward-pleated trousers are fully cut with a high rise that remains well-concealed under the waistcoat. Given Wargrave’s penchant for traditionalism, they are likely held up with suspenders/braces, but these remain unseen throughout the show. They do have side pockets and the bottoms are finished with cuffs.

Ever the proper houseguest, despite the circumstances, Wargrave never lets his waist go uncovered and thus several details about the trousers remain unknown.

Though similar to his later shirt and ties, the shirt and tie that Wargrave wears when he arrives at Soldier Island with the other guests on August 8 are never again seen after the first episode.

The multi-striped shirt is white with bold double-stripes in light blue and soft tan that appear wide like butcher’s stripes when seen from a distance. The blue and tan stripes on this shirt (and his others) echo his rope-striped suiting. The shirt has a front placket and rounded single cuffs. It is collarless so Wargrave attaches a white collar with a wide cutaway spread, fastening it to his shirt with a gold collar stud.

Wargrave self-medicates. Note the eyeglasses that he typically carries attached via cord in his jacket’s barchetta pocket.

Wargrave wears the same pair of flat gold rectangle cuff links with all of his dress shirts throughout the series.

For this first day of travel, Wargrave’s tie is black silk with a pattern of small tan dots; every other dot is enclosed in a gray square box. 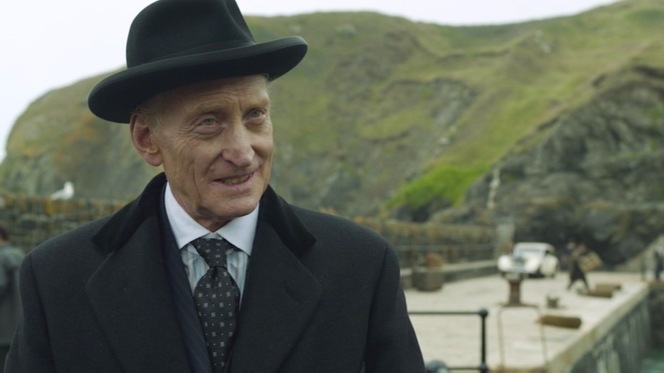 Wargrave makes the acquaintance of his fellow island-goers.

For lunch – and an impromptu dip into the sea – on the second day, August 9, Wargrave wears a different shirt that is striped and styled similarly to the first one; he will wear this shirt for the duration of the series. The white shirt is striped in blue and tan with a front placket, rounded single cuffs, and collar band with its gold stud to attach the white cutaway collar. 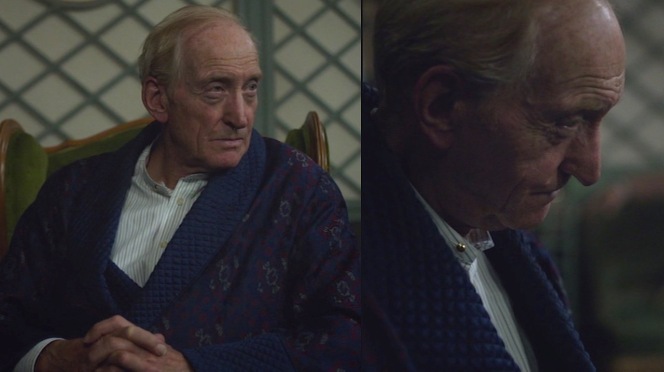 If only we got to see more of that badass dressing gown!

When Wargrave is warming up after having followed Vera into the water, he removes the collar and tie to dry up in his luxurious blue printed dressing gown. With the collar and tie removed and the gold collar stud undone, the top of his off-white henley undershirt can be seen poking out.

Earlier in the day when he was dressed for lunch, Wargrave wore a gradient-striped tie that darkens from tan through brown to black, separated by a wide gray stripe before the gradient stripe pattern begins again. 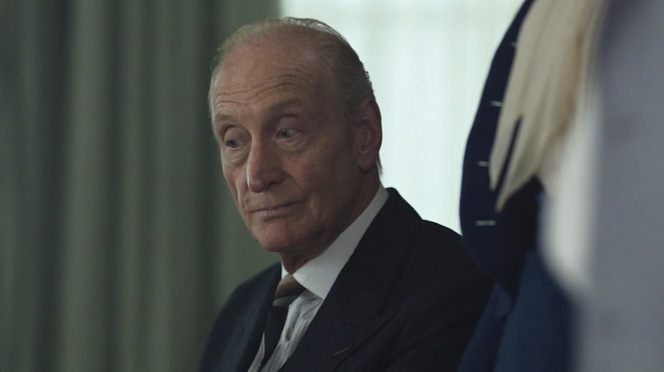 When And Then There Were None needed a more reserved Jim Halpert expression, Judge Wargrave rose to the occasion.

Wargrave’s dive into the sea that evening to “save” Vera was the last appearance of his suit’s matching vest. He stops wearing it for the “doomsday” confession evening on the third day, when he wears the same striped shirt as the day before with a busier printed tie of small gray boxes on a dark navy silk ground. 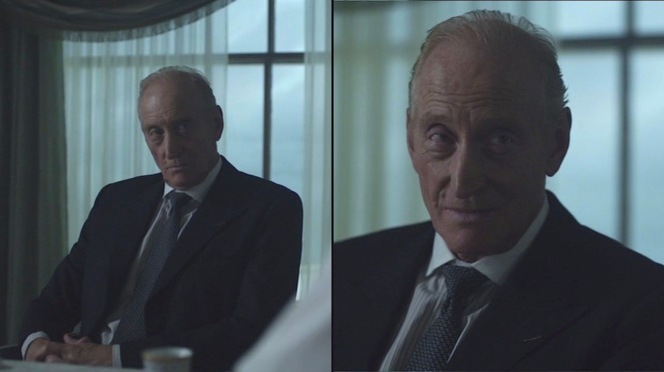 When he “comes clean” to the others, Wargrave is more exposed than usual without a vest.

Finally, for his “rise from the dead” on August 11, Wargrave varies the outfit by sporting a dove gray vest in place of his normal suit vest. As he busies himself around the house, carrying out task after task, the look evokes a butler or manservant…appropriate given Wargrave’s self-appointed role as a “servant of death”. The single-breasted vest also has four welt pockets and a notched bottom that is left open under the bottom of the six urea buttons.

Wargrave makes the final arrangements as the last two soldiers (and thank god this adaptation called them that) prepare to meet their end.

He wears the same striped shirt as he wore the previous two days, although he swaps in a fresh tie. This tie appears to also involve a series of softly gradient diagonal stripes, surprisingly in the American style of right-down-to-left, all in shades of blue. 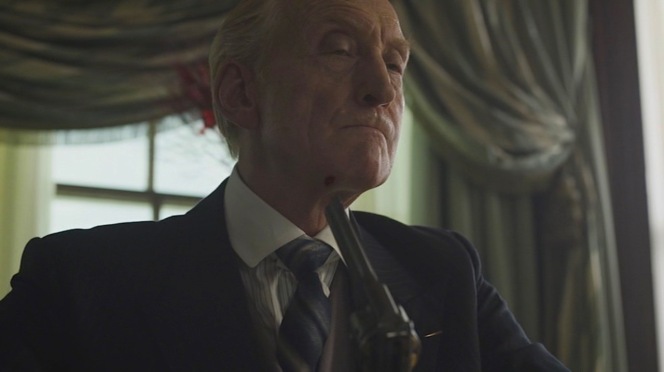 Well, this is certainly a spoiler. You did see the warning at the top of the page, right? (This is the best angle we get of his tie!)

Wargrave wears a pair of black leather balmorals – also known as oxford shoes – with a perforated cap toe. He usually wears them with black socks, although a quick glimpse while searching Lombard’s room reveals that he wore lighter gray socks on the third day. (The next day, he is back to black socks.)

And the spoilers just keep on comin’! Sorry, gang.

When he first arrives at Soldier Island, Wargrave wears a heavy charcoal Chesterfield coat that is a surprising choice for an August afternoon, even in chilly England. The single-breasted wool overcoat has a three-button fly front and large-notched lapels with a black velvet collar. Though a velvet collar isn’t a requirement for a Chesterfield coat, it does add formality as well as the option to easier replace the collar as it wears out before the rest of the coat; given his penchant for detachable collar shirts, Wargrave seems aware of the practicality of such a concept. The coat has a straight welted breast pocket, straight flapped hip pockets, 3-button cuffs, and a long single vent.

The group’s old-timers, Justice Wargrave and General Macarthur (no, not that one), arrive with the rest of the guests.

The other guests should have been able to guess the murderer right away if they had remembered that Wargrave was the only arrival to wear the stereotypically villainous black hat. Wargrave wears a black felt Lord’s hat, best described as a homburg with a pinched crown.

Wargrave dresses to kill (pun!) throughout his duration on Soldier Island. The uniformity of each day’s navy suit and striped shirt ensemble is subtle enough that it could go unnoticed unless one looked close enough… much like his own violently obsessive personality. 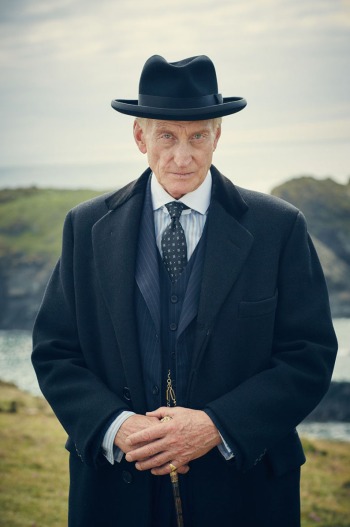 Don’t want to lose your glasses? Attach them to a cord and clip the cord through your lapel buttonhole.

Check out the series and celebrate Agatha Christie’s birthday by picking up her classic, best-selling thriller!

It’s worth noting that Charles Dance indeed shares a resemblance to Wilfred Hyde-White, who portrayed the judge in 1965’s Ten Little Indians, but Dance’s respectable gravitas and the supreme quality of this production cements him in my mind as the definitive Wargrave.

(Also worth noting is Barry Fitzgerald’s entertaining and surprisingly “cute” performance of the judge in 1945’s And Then There Were None. Given that Charles Dance is nearly an entire foot taller than Fitzgerald, there is no resemblance to speak of.)