Cillian Murphy as Tommy Shelby in the third season premiere of Peaky Blinders.

Today’s Week of Weddings post focuses on the sadly short-lived union of Tommy Shelby and Grace Burgess that kicked off the third season of Peaky Blinders.

This is the second Peaky Blinders wedding to be featured on BAMF Style after the first season nuptials of John Shelby and Esme Lee. While that first wedding was considerably spontaneous (at least for the groom), this union had been in the fire since Tommy and Grace first laid eyes on each other across the Garrison in 1919. Five years and one dead Irish investigator later, the two are finally tying the knot.

Grace’s family is comprised of several members of the “King’s Irish” cavalrymen that nearly abandoned the Peaky Blinders on the battlefield a decade earlier, so Tommy is forced to lay down some relatively unorthodox rules for a wedding:

No cocaine. No sport. No telling fortunes. No racing. No fucking sucking petrol out of their fucking cars… But the main thing is, you bunch of fuckers, despite the provocation from the cavalry, no fighting!

As Michael Hogan from The Telegraph reported: “Sex, drugs and ragtime: welcome to a fairytale wedding, Shelby-style.”

Tommy’s blue wedding suit is the first of Cillian Murphy’s on-screen outfits from new costume designer Alexandra Caulfield, who took over for the third season of Peaky Blinders. This outfit is a comparative anomaly for Tommy Shelby with its bold blue suiting, solid white shirt, and two-tone dress boots. 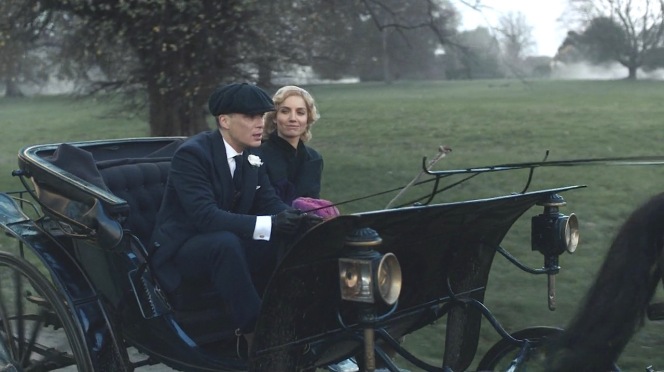 Luckily for the horse, Tommy and Grace forewent tying “Just Married” cans to the back of their carriage.

Tommy’s wedding is the only appearance of his navy flannel three-piece suit, signifying its relatively significant place among his grayer garments. The short-fitting jacket is single-breasted with a two-button front, slightly flared skirt, and a single vent in the back. The jacket has straight, jetted hip pockets and a welted breast pocket where Tommy wears a white display kerchief poking out; likely linen, as that would be the most era-appropriate choice. Each sleeve ends with three-button “kissing” cuffs. 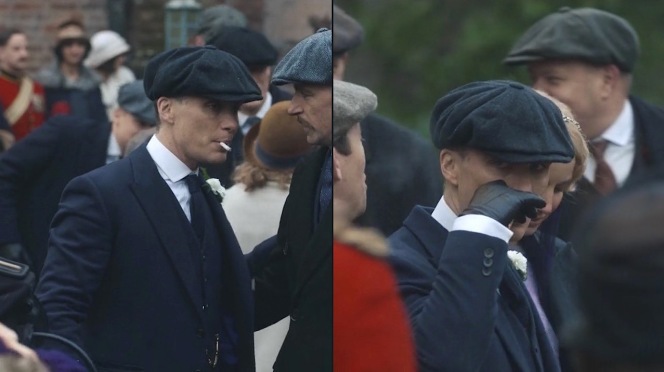 Tommy’s peak lapels have a short gorge and point up toward the roped sleeveheads at the end of each padded shoulder. Single-breasted jackets with peak lapels grew increasingly popular during the 1920s, enjoyed a revival during the 1970s, and are undergoing another resurgence today in a slightly slimmer form.

To commemorate the day, Tommy fastens a white boutonnière through left lapel.

Waistcoats are an essential part of the Peaky Blinders’ look, and, as the gang’s leader, Tommy wears exclusively three-piece suits with matching single-breasted vests. This waistcoat has four welted pockets and six buttons down the front, with the lowest button correctly worn unbuttoned over the notched bottom. The satin-lined back is a rich navy to match the suiting with an adjustable strap along the bottom.

In addition to a new costume designer, the third season of Peaky Blinders also means a new style of pocket watch for Tommy. He wears a yellow gold “half-hunter” pocket watch, which gets better exposure in the following episode, on a gold single Albert chain attached to a burgundy-faced fob. The watch is worn in the lower left pocket of his waistcoat.

Tommy is overflowing with intensity on what should be “the happiest day of his life”.

Pleated trousers also grew in popularity as “the Roaring Twenties” continued, and the double forward pleats on Tommy’s trousers would have been quite fashionable in 1924. They have straight side pockets, no back pockets, and the bottoms are plain-hemmed.

The appropriately high rise of the trousers hides the waistband under the waistcoat. As a belt would create an unfortunate “bunching” effect under the vest, Tommy correctly wears a pair of suspenders (braces) to hold up his trousers. They are a wide dark navy fabric that nicely matches his suit – although that’s certainly not a requirement for suspenders – with silver clasps.

Tossing aside his previous penchant for striped shirts, Tommy wears a white cotton collarless dress shirt with a plain front and squared double (French) cuffs, fastened by a set of etched gold octagonal cuff links. Tommy retains his habit of wearing sleeve garters and sports a set of gold-toned garters just above the elbow on each shirt sleeve.

Although the shirt’s white collar is detachable, it is of the same slim and widely spread style that is very popular (albeit attached) on fashionable men’s dress shirts today. Tommy’s collar attaches through studs on the front and back of the shirt collar band.

Detachable collars on men’s shirts were popular through the 1920s. As laundering became easier and cheaper and as less situations called for crisp white shirts, attached collars became standard and attained the nearly universal popularity that they have today.

Tommy keeps his colors simple with a navy blue knit silk tie that nearly matches his suiting. It is held into place with a long, slim silver-textured tie bar that he clips to the tie and shirt just above the opening of the waistcoat. A waistcoat essentially reduces the tie bar’s utility to decoration, marking one of the few instances when Tommy – or any Peaky Blinder, for that matter – puts form before function.

Tommy’s shirt collar appears to have a considerably narrower spread during his harangue in the kitchen.

Form again becomes the order of the day as Tommy sets aside his tried-and-true hobnail work boots for a nattier pair of brown two-tone oxford dress boots. These boots appear to have darker brown leather vamps with a tan suede upper quarter. The toe is capped and the lacing is closed, like a balmoral or oxford dress shoe, with brown laces. Tommy wears dark socks, possibly black.

Tommy wears his fancy boots when he isn’t expecting the need to kick the shit out of anyone to arise.

The “blinding” razor sewn into his peak isn’t visible, but Tommy proudly wears the peaked flat cap that gives his gang its name. Tommy’s charcoal wool cap has a paneled top with a button in the center, signifying it as a “newsboy” cap rather than just a flat cap.

Tommy’s black leather gloves add an extra layer of protection on his chilly wedding day, especially after he gallantly offers his overcoat to Grace. 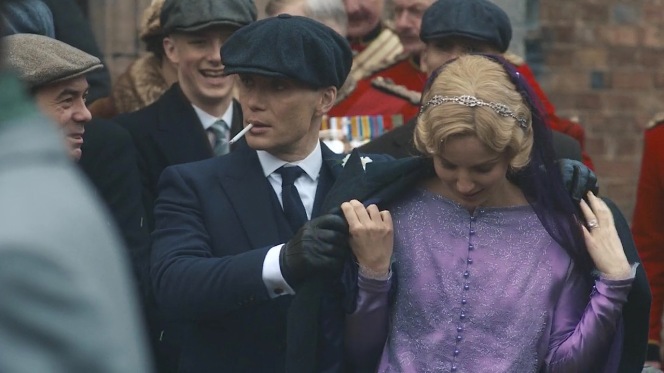 The aforementioned overcoat is a black heavy wool Chesterfield that extends down to his knees. It has a wide, full-bellied peak lapels with a long gorge and a black velvet collar, a feature found on many Chesterfields as a worn or dirty collar is easier to replace when it’s velvet rather than trying to find matching wool.

Tommy’s single-breasted Chesterfield coat has a covered front fly, but he leaves all three buttons open, likely giving him better access to his holstered Webley revolver. The shoulders are padded and roped with three buttons at each cuff. The coat has a welted breast pocket, straight flapped hip pockets, and a flapped ticket pocket on the right.

Tommy looks like a deer in the headlights during the official wedding photo (left) and literally stands in front of the headlights later that night (right).

With the pomp and circumstance of the day behind him, Tommy retreats to his bedroom for a few private moments with Grace, stripping down to only his beige cotton underpants, which have double forward pleats in the front and back with a double-ended tab on the back waistband. Each end of the tab is pointed with a large tan plastic button.

The events of the day also mean a new piece of jewelry for Tommy, who begins wearing a gold wedding ring on the third finger of his left hand, no longer sporting either of the previous rings that he had worn on his right hand. 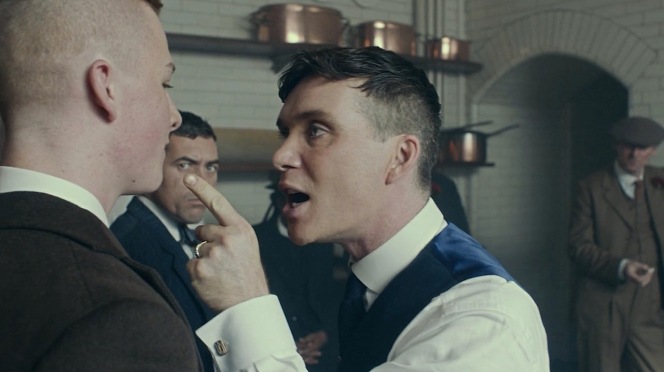 Probably not the best day to test Tommy’s temper…

Church has always been a part of the Shelbys’ life, from the very first episode when Tommy tracks down Polly in a pew to tell her about the arms deal to the following episode when Inspector Campbell does the same. Tommy himself seems to regard churches as no more than just another place to take off his hat, and his religious cynicism is no doubt fueled during his dealings with the corrupt Father John Hughes (Paddy Considine) throughout the third season. 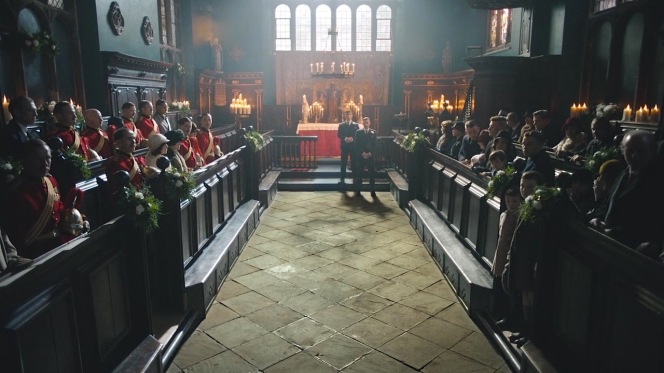 Steve Harvey would certainly be intimidated by this take on Family Feud.

After the church wedding, the Shelbys invite their guests to Tommy’s new estate, Arrow House, in Warwickshire. According to Hogan’s piece in The Telegraph: “The filming location is Grade II-listed Cheshire house Arley Hall, home to Viscount Ashbrook. Production designers took inspiration from Citizen Kane, The Shining and American photographer Saul Leiter.”

Like any proper Peaky party, there’s no shortage of champagne, whiskey, and wine.

Neither the Peaky Blinders nor the British Army cavalrymen are particularly thrilled to be connected as family through the marriage of Tommy and Grace, but the Shelby clan takes its disgust a step further by disobeying Tommy’s commands and fighting, “playing the snow”, and almost definitely sucking the gas from the officers’ cars. 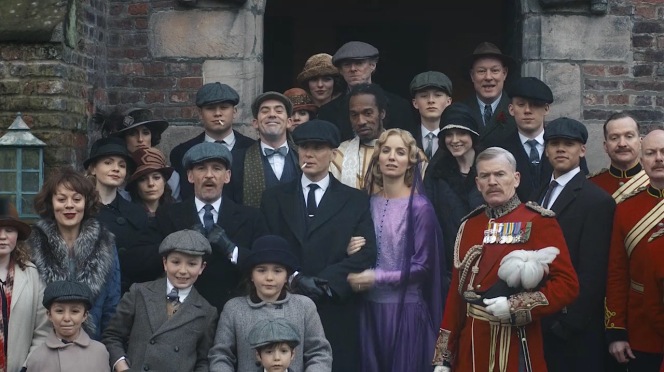 “The Russians have made contact,” heralds the arrival of Anton Kaledin, the ill-fated Russian who provides a problematic code name when seeking out Tommy on his wedding day to make good on an arms dealer. The short-lived Kaledin wouldn’t live to see the couple’s honeymoon, but another new guest – charming portrait painter Ruben Oliver – seems to have a romantic eye for Aunt Polly.

Tommy’s wedding may have been set in 1924, but his timeless three-piece navy suit and accessories would still be fashionable nearly a century later.

Check out Peaky Blinders on Netflix or pick up the third season to own.

Those bastards out there are our family now… No cocaine, no sucking petrol out their fucking cars, and no fucking fighting!