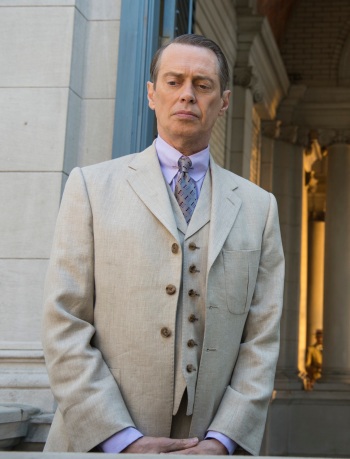 To commemorate this unofficial start of summer with Memorial Day tomorrow, BAMF Style is checking in with fashion plate Nucky Thompson from Boardwalk Empire as he enjoys a warm spring evening in Havana at the start of the fifth season.

Having exiled himself to Cuba in the seven years since we last saw him, Nucky is still wheeling and dealing in the illegal liquor trade, currently working on an export deal with the good folks of Bacardi rum in the possible wake of Prohibition’s imminent end.

Nucky Thompson dresses appropriately for the warmth of a Havana night in a beige linen three-piece suit, styled to meet the era’s fashions and Nucky’s own evident preferences. This suit was included in an auction shortly after the show ended, giving us even better looks at some of its finer details than we would get from its brief time on screen.

The single-breasted jacket has notch lapels that roll to the top of the three brown urea buttons placed high on the chest. The high button stance, a holdover from Nucky’s Edwardian-inspired suits worn earlier in the series, means that Nucky could theoretically wear all three buttons fastened, especially as the lower foreparts do not cut away until well below the lowest button.

The inverted box-pleat patch pockets on the hips and left breast indicate a more casual, sporty suit perfectly appropriate for an American spending his comfortable exile in the tropics. The jacket also has roped shoulders, a long single vent, and four-button cuffs. 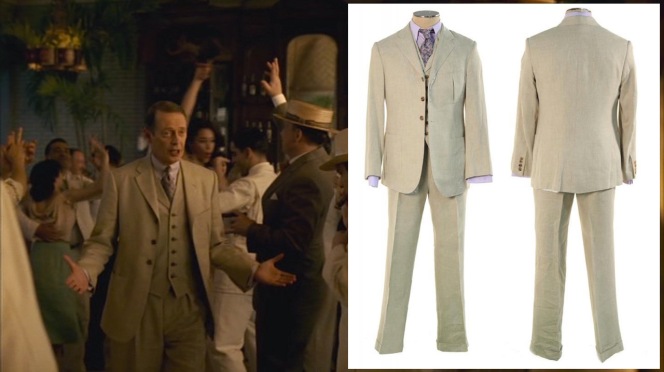 Formality would not have been a major requirement for a sporty summer suit in 1931 Havana, but Nucky’s preference for exclusively three-piece suits calls for a matching vest (waistcoat) with this suit. The six-button single-breasted vest has notch lapels and a notched bottom.

The trousers’ high rise is covered by the waistcoat, but it’s almost certain that he wears them with suspenders (braces) per his usual. The forward pleats reflect the fashionable expectations of a well-to-do gentleman in the early 1930s as do the slightly flared bottoms finished with turn-ups (cuffs).

This being Nucky Thompson, a solid beige suit would be far too conservative to wear without a pop of color. He thus wears a bright lilac broadcloth shirt with a tab collar with long points that fill the V-shaped opening between his tie and the top of his waistcoat. The collar is held in place with a gold collar bar.

Nucky flashes his cuffs while reaching for his cocktail. The suit’s auction page provided a nice view of the shirt cuff and links featured on screen.

His shirt’s double (French) cuffs are worn with a unique vintage set of double-sided dulled silver octagonal cuff links. Each link has a mother-of-pearl setting encapsulated by a yellow enamel border.

Nucky wears a silver dot-printed tie that the auction identified as the Geneva brand. The tie is covered in a motif of dotted squares, each consisting of nine repeating dot sets: the three upper-left dots are purple, then three pink dots, and three lavender dots on the lower-right. The dots nicely add a Deco touch of contrast to the lighter-colored outfit while also providing tonal coordination with his lilac shirt.

Season five’s first glimpse at Nucky is a stoic one, hardly the face you’d expect from someone about to embark on a night of drinking and dancing in Prohibition-era Havana.

Briefly glimpsed while dancing with Sally are Nucky’s two-tone wingtip spectator shoes in brown and cream leather, worn with cream socks that nicely fill the leg line between the trouser bottoms and his shoes.

Nucky and Sally sway their way through the Havana nightlife.

Nucky wears a wide-brimmed straw Panama hat with a classic, center-creased optimo crown, unlike the more fedora-like pinched and dented crown on some more modern Panama hats. The optimo style remains popular among British travelers throughout the tropics.

The wide black grosgrain ribbon is striped with a white stripe through the center and a single thin gold stripe above and below it.

Sally and Nucky have tough talks over after-dinner drinks.

Jaxon Hats offers the similarly styled Cuenca Panama Straw Habana Hat for $88, although the hatband is slimmer and solid black. Super premium custom Optimo Montecristi Panama Hats are also available from The Panama Hat Company of the Pacific if you’re willing to shell out a few hundred bucks.

You can find a selection of Boardwalk Empire hats available from Fashionable Hats, which also includes a helpful style guide for gents looking to top off their look à la Nucky Thompson, Al Capone, or Jimmy Darmody.

Nucky: How’s the Presidente?
Senator Lloyd: That’s what this is called? Damn refreshing.

Close enough. The cocktail that Nucky Thompson, Sally Wheet, and Senator Wendell Lloyd enjoy in Havana is actually likely meant to be the El Presidente, a rum concoction that indeed shot to popularity among Havana’s upper class during the years of Prohibition. It was named in honor of President Gerardo Machardo, Cuba’s fifth president who served from 1925 to 1933 and would have been in office at the time that Nucky and Senator Lloyd tipped their glasses.

Although Nucky likely viewed himself as a “presidente” as well…

Much debate seems to surround the actual ingredients of the El Presidente, with the only seemingly agreed-upon facts being that the main component is light rum and that it is served straight up in a chilled cocktail glass.

The two recipes that exist in my well-loved 2009 edition of the Mr. Boston Official Bartender’s Guide differ from the sweeter No. 1 to the more bitter No. 2, which is essentially a dry Manhattan made with light rum instead of whiskey:

Further investigation muddies the waters – or the rum – by blending both the grenadine and dry vermouth of both recipes and adding curaçao! According to Wikipedia: stir together 2 parts rum, 1 part curaçao, 1 part dry vermouth with ice, strain into a chilled cocktail glass, and garnish with an orange peel twist. This Wikipedia recipe reflects the ones featured in Cold Glass and Imbibe, albeit with slightly different proportions. Both the latter recipes call for a double garnish of a maraschino cherry joining the twist of orange peel.

Based on my own personal preferences, I would likely go with a variation of Cold Glass recipe but with the addition of grenadine:

El Presidente à la BAMF Style: Stir two ounces of aged Bacardi light rum, 1 ounce of Dolin Blanc vermouth, a half teaspoon of Grand Marnier, and a half teaspoon of grenadine over ice, then strained into a well-chilled cocktail glass with a twist of orange peel and a maraschino cherry. Yum.

Given the lack of consensus here, my best suggestion would be to grab all of the ingredients, call up some close friends, and taste-test to determine which recipe you prefer!

Nucky Thompson looks cool, refreshed, and classic in a three-piece linen suit accented by springtime pastels in his shirt and tie.

Check out the whole series, but don’t miss the fifth and final season.