Philip Marlowe is a bold dresser. We learn that from the opening paragraph of Raymond Chandler’s inaugural novel, The Big Sleep, with the description of the detective’s powder blue suit, dark blue underpinnings, and socks with clocks. The rest of the United States may have adopted a somber approach to dressing during the years of the Depression, but Marlowe is an L.A. private eye. He’s gotta turn heads.

Decades after the novel’s publication and Bogie and Bacall sizzled in its first cinematic adaptation, the story was once again slated for the silver screen. This time, there was no Motion Picture Production Code to contend with, and audiences would be exposed to all of the sex, drugs, and nudity that Chandler had intended. It sounds like a straight adaptation but for the fact that the story was updated to the contemporary setting of late 1970s London.

With the change of setting comes a natural change of style. The original setting for Chandler’s novel and Howard Hawks’ film fell during the two decade “golden age” of both Hollywood and menswear. Flash forward to the 1970s as polyester leisure suits, dramatic disco shirt collars, and bell-bottomed trousers abound… hardly a golden age. Luckily, Philip Marlowe can adapt.

Philip Marlowe’s complex case leads him to a swanky gambling den run by racketeer Eddie Mars (Oliver Reed). Perhaps subtly reflecting the increasing chaos of the story, Marlowe dons a bold multi-striped jacket in blue, gray, and black. Of course, taking bold cues from classic boating blazers of the 19th century, the stripe pattern is hardly as simple as it sounds.

Marlowe takes a moment to process exactly what it is he chose to wear this evening.

The single-breasted sport jacket is styled like Marlowe’s other tailored jackets in the film with broad notch lapels that roll to a low two-button stance with the buttoning point neatly meeting the tie blade and the trouser waistband at Mitchum’s waist.

The jacket has natural shoulders, a long single back vent, and a darted front that interferes with the busy stripe pattern but suppresses the waist to create a flatteringly imposing, athletic silhouette for the 6’1″ Mitchum despite the 60-year-old actor’s increasing midsection.

Marlowe’s jacket concedes to the fashion trends of the ’70s in many respects, including the wide flaps on the slanted hip pockets and ticket pocket. He provides an interesting contrast against the cool steel tones of the jacket by wearing a scarlet red silk display kerchief in the welted breast pocket.

The red connects to yet another chaotic choice in this fascinatingly interesting outfit: the tie. The brick red ground is covered with a field of taupe flecks and striped with double rows of gradient-shaded four-leaf clovers that streak across the tie like constellations in the stars, following the appropriately British “uphill” direction of right-up-to-left. (For a closer look at the tie, check out this behind-the-scenes photo.)

With such a busy jacket and tie, only a solid white shirt could serve as the grand neutralizer to keep this outfit from venturing into the clownish. Luckily, celebrated London shirtmaker Frank Foster was called into service for Mitchum’s cotton poplin shirt with its tall semi-spread collar with long points, front placket, and single-button rounded cuffs.

Just when the outfit can’t handle another pattern, Marlowe gives it a rest with a pair of solid wool trousers in charcoal blue with a full fit that extends down to the plain-hemmed bottoms that flare out just enough to thankfully avoid bell-bottom territory. As proven by a behind-the-scenes photo where Mitchum has removed the jacket, these trousers have thick belt loops for his black leather belt with its polished squared single-prong buckle.

Marlowe wears the same shoes that appear in other scenes, a pair of black leather high-vamp slip-ons with broguing detail including the distinctive wingtips. His dark cotton lisle dress socks are probably black. 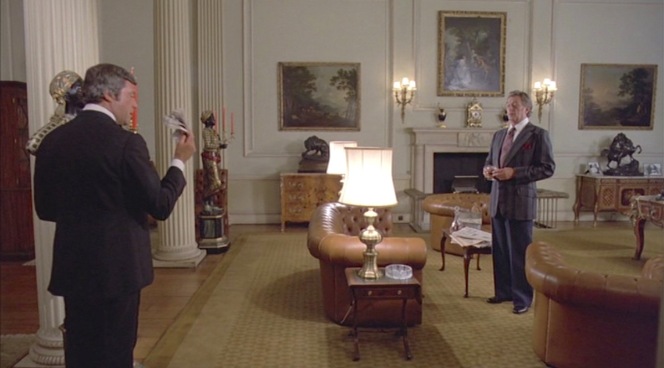 Barely seen in this sequence is the stainless Rolex DateJust with a silver dial and steel Jubilee bracelet that likely belonged to Robert Mitchum in real life, having previously appeared in his films like The Yakuza (1975).

Robert Mitchum’s Marlowe takes a bold approach to dressing for a night out, clashing patterns and colors with unapologetic glory.

You may want to be careful trying to pull off this look, either by keeping the base layer and swapping in a plain gray jacket or replacing the neckwear with a subtle or solid navy or even black tie.

The Walther PPK appears to be the sidearm of choice for the British gangsters in Eddie Mars’ organized crime operation, as Mars himself had drawn a nickel PPK – with the slide curiously locked back – on Marlowe upon their first meeting.

Later, Marlowe leaves Mars’ club with Charlotte Sternwood (Sarah Miles) on his arm only to be confronted by Lanny (Dudley Sutton), one of Mars’ men who has his own blued PPK. 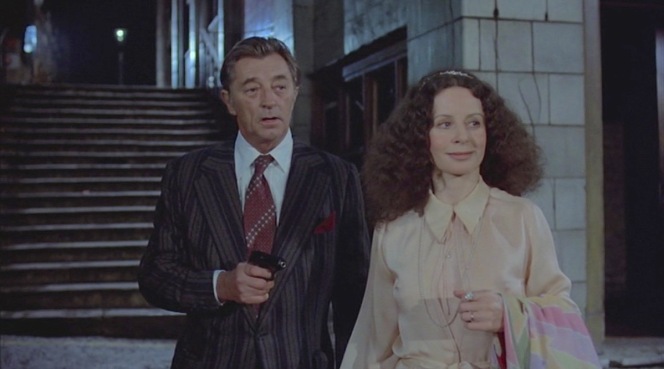 Leaving a casino with a woman and a Walther PPK in hand… straight out of James Bond. The jacket? Not so much.

Check out the movie and read Chandler’s 1939 novel.