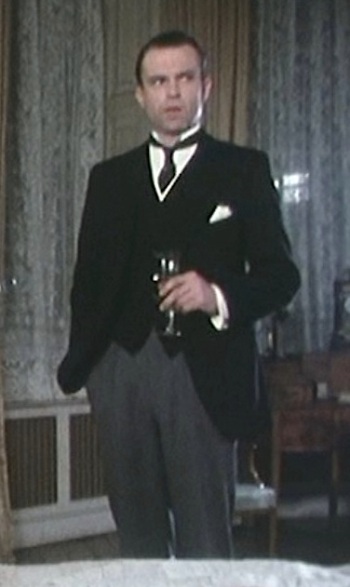 Sam Neill as Sidney Reilly in Reilly: Ace of Spies (Episode 10: “The Trust”)

Throwback Thursday is always a great opportunity for BAMF Style to revisit Reilly: Ace of Spies, the fictionalized miniseries that depicts the life of Sidney Reilly, an early 20th century master of deception. This post will examine Reilly’s frequent wearing of black lounge, a semi-formal day dress known in the U.S. as a “stroller”. Black lounge makes quite a few appearances in the latter episodes, first seen for Reilly’s day in London court in “After Moscow” (Episode 9) and, finally, during his third and final wedding in “The Last Journey” (Episode 11).

The tenth episode, “The Trust”, finds erstwhile government agent Reilly in New York City, desperately trying to finance his friend Boris Savinkov’s anti-Boleshevik movement. Part of Reilly’s fundraising includes selling off his vast collection of antiques, art, and priceless Napoleona… all while being courted by a secretive Russian organization known as The Trust. END_OF_DOCUMENT_TOKEN_TO_BE_REPLACED

Yet another Week of Weddings two-partner, this time looking at the many marriages of Sidney Reilly, just in time for Throwback Thursday. 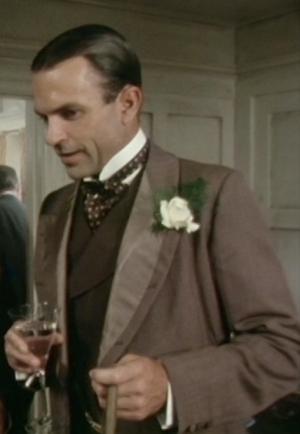 Sam Neill as Sidney Reilly during his first wedding on Reilly: Ace of Spies (Episode: “An Affair with a Married Woman”).

Sam Neill as the former Shlomo Rosenblum, now Sidney Reilly, an ex-professor hired as an informant for the British Secret Service

Hopefully you know all about Reilly from the first Reilly: Ace of Spies post on this blog. What? You don’t want to go back and read all million paragraphs I wrote? Too bad, here’s a million more:

The first episode, “An Affair with a Married Woman”, quickly establishes Reilly as a cunning man who will stop at nothing in pursuit of his goals. In the summer of 1901, the young Reilly’s primary goal is money. Thus, the following sequence is appealing to him:

END_OF_DOCUMENT_TOKEN_TO_BE_REPLACED

Yes, anyone unfamiliar with the James Bond series, you read that correctly – James Bond does get married. It goes about as well as you’d expect.

Despite being the first film appearance of wet-behind-the-ears Australian mechanic and model George Lazenby, On Her Majesty’s Secret Service is often considered one of the finer Bond films due to its down-to-earth story, realistic but fantastic villains and situations, Bond as a character rather than an instrument, and strict adherence to the source material, which was one of Ian Fleming’s best Bond novels.

Some argue that, had Sean Connery stayed on the role for the film, it may have been the best in the series. Given Connery’s brief return two years later as a paunchy Bond in Diamonds are Forever, establishing the series’ era of over-reliance on humor, this may or may not be true. END_OF_DOCUMENT_TOKEN_TO_BE_REPLACED