85 years ago today on September 13, 1935, a sleek silver aircraft rocketed through the air over Santa Ana, California, at a record-breaking speed over 350 miles per hour, making four passes over Martin Field before a crash-landing that deposited its owner—one of the wealthiest and most ambitious men in America at the time—into a beet field, alive and hardly discouraged. As Howard Hughes’ colleagues ran over to extract the 29-year-old entrepreneur and aviator from the wreckage of the H-1 Racer, he hardly had his own safety in mind, issuing the command: “We can fix her, she’ll go faster!”

“Fastest man on the planet,” Leonardo DiCaprio’s Hughes brags about himself to his then-girlfriend Katharine Hepburn (Cate Blanchett) in The Aviator, Martin Scorsese’s biopic that famously matched each scene’s photography to the color process available to cinematographers at that time. Of the 11 Academy Awards for which The Aviator was nominated, it won five for some of its most celebrated aspects: Best Art Direction, Best Cinematography, Best Costume Design, Best Film Editing, and Best Supporting Actress for Blanchett.

“The span of their romance would coincide with the peak of Hughes’ global celebrity,” wrote Karina Longworth of Hughes and Hepburn’s relationship in Seduction: Sex, Lies, and Stardom in Howard Hughes’s Hollywood. “His daring feats in the realm of aviation and reports of his movie star girlfriend combined for a potent image of a 1930s idol.”

Indeed, the [relatively] more nonchalant Hughes we see during these mid-1930s sequences seems to accurately portray his persona at the time as a Hollywood playboy, undoubtedly eccentric but not yet transformed by his severe OCD into the manic recluse that would emerge over the following decade.

Per the usual for Scorsese fare, the soundtrack is also a winner, blending diegetic music of the era like Django Reinhardt’s gypsy jazz with newly recorded arrangements featuring today’s artists like David Johansen of New York Dolls crooning the Fats Waller and Andy Razaf-penned “Ain’t Cha Glad?” setting the scene for Howard and Kate’s date night in.

Indeed, while the 1935 tests for the H-1 monoplane may have resulted in a crash-landing, Hughes’ modifications to the aircraft would have it ready to fly again soon when he set the transcontinental speed record twice in the following two years in the H-1, ultimately beating his own record by flying from L.A. to New York City in less than eight hours on January 19, 1937. Despite this success, Hughes would be disappointed to learn that the U.S. Army was not interested in purchasing its design when ramping up its air fleet in anticipation of World War II. 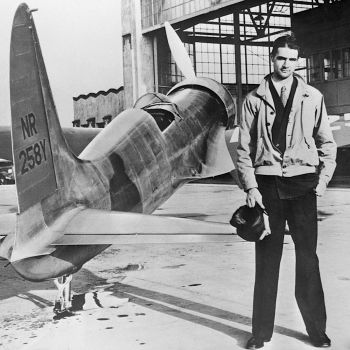 The real Howard Hughes, standing with the H-1 Racer in September 1935.

Photographs and footage from the real Howard Hughes’ test of the H-1 on September 13, 1935, show the young man dressed somewhat incongruously for flight with a beige blouson jacket partially buttoned over a dark double-breasted suit, leather flight helmet in hand.

For The Aviator‘s depiction of the scene, costume designer Sandy Powell approached the outfit with more of an eye for practical sensibilities, similar in spirit but different in execution from what the real Hughes had worn and arguably different from the leather “barnstormer” flying jacket we saw him wearing on the set of Hell’s Angels nearly a decade earlier.

Powell dressed DiCaprio in the pleated trousers of the stone gray woolen flannel suit Hughes had worn when meticulously inspecting the aircraft, affecting an adventurous, proto-Indiana Jones look with a flight jacket layered over an open-neck shirt and topped with a brown felt fedora snagged from the head of his chief engineer, Glenn “Odie” Odekirk (Matt Ross).

By the 1930s, aviation had been firmly established to the point that the military standardized leather flight jackets for its pilots, beginning with the leather A-1 with its button-up front and its iconic successor, the zip-up A-2 that would famously dress the U.S. Army Air Forces pilots well into World War II. Not all flight jackets were made of leather, however; the U.S. Navy and Marine Corps both authorized khaki cotton blousons like the 37J1 and the M421 for their pilots. Neither the real Hughes nor the DiCaprio depiction wear either of these specific garments, but the influence is evident.

DiCaprio’s screen-worn flight blouson has a khaki cotton shell with a dark brown ribbed hem to secure the jacket around his waist. The jacket has a convertible collar, which can be worn fastened over his neck with a top button closure or flat like lapels as Hughes wears for the flight. The jacket closes with a zip-up front, the most typical fastening mechanism from the early 1930s onward, replacing the button-up front found on earlier jackets like the leather A-1 and the garment worn by the actual Hughes for this 1935 test flight. The set-in sleeves are finished with two stacked buttons to securely close over the cuffs. Similar to the A-1 jacket, there are two inverted box-pleat patch pockets with mitred bottom corners placed just atop the waist hem; both of these pockets close with a single button through a pointed flap.

Unlike the aforementioned Dr. Jones in his adventure-seeking khaki bush shirts, Hughes dresses for flight in one of his usual white cotton dress shirts with a sharp point collar worn open at the neck for the flight, also detailed with a breast pocket, plain “French placket” front, and button-closed barrel cuffs that emerge stained from the crash.

His sleeve still stained from the crash, Hughes brushes off the day’s events when debriefing with Katharine Hepburn.

Rather than any aviation-intended footwear like flight boots or the like, Hughes takes the controls in a pair of everyday semi-brogue oxfords with brown calf leather uppers that show his burgundy-on-beige mini-grid socks. A cap-toe differentiates the semi-brogue (or “half-brogue”) from the full brogue with its familiar wingtip design, though both obviously feature the decorative perforations and serrated edges that characterize “broguing”.

The semi-brogue style was reportedly pioneered by London bootmaker John Lobb in 1937 as a hybrid shoe adding the character of a full-brogue wingtip to a dressy cap-toe oxford, though this date means it would be slightly anachronistic for Hughes to be wearing it two years earlier… though it’s not inconceivable that our very particular—and wealthy—protagonist would have been able to commission his own custom semi-brogues without informing the rest of the men’s footwear world. (Okay, it’s probably an anachronism, but still…)

Pedal to the metal.

As explained earlier, Hughes’ double reverse-pleated trousers are part of a stone gray flannel double-breasted suit he had worn earlier when inspecting the H-1 pre-flight.

These trousers have straight side pockets, jetted back pockets (with a button to close the left pocket), and the bottoms are finished with turn-ups (cuffs), consistent with trending details of the era. The trousers are held up with a brown braided leather belt that closes through a gold-toned single-prong buckle.

The full stone gray flannel suit is seen during a few earlier occasions, beginning with Hughes’ meticulous inspection of the H-1’s flush rivets and his meeting with TWA executive Jack Frye (Danny Huston) to discuss flying around the world in the substratosphere (“above the weather!”), resulting in his eventual $15 million purchase for controlling interest in the airline.

The double-breasted jacket reflects the sharp silhouettes of this “golden era” of menswea, built by wide, padded shoulders accentuated by roped sleeveheads and broad, sharp peak lapels with straight gorges. The ventless jacket has a traditional 6×2-button closure with a row of vestigial buttons above the two rows of functioning buttons in addition to a welted breast pocket, jetted hip pockets, and four buttons detailing each cuff. With his usual white shirt, he wears a tie that appears to be “uphill” block-striped in rust and teal with narrow yellow border stripes.

Hughes pulls on the suit for another late night inspection, though he foregoes a tie and wears his striped shirt open at the neck, a precursor of the de facto uniform he would later adopt of double-breasted suits, open-neck shirts, and white Keds sneakers. Styled like his usual shirts with point collar, plain front, button cuffs, and likely a breast pocket, this shirt is patterned with rust brown striping against a pale blue ground. 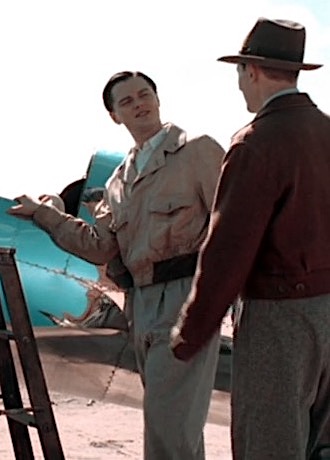 As Howard Hughes in The Aviator, Leonardo DiCaprio dresses down the mogul’s usual business look with a touch of adventure via a rugged khaki flight jacket characteristic of this interwar era.

Check out the movie. I also enjoyed reading Karina Longworth’s well-researched Seduction: Sex, Lies, and Stardom in Howard Hughes’s Hollywood, an extensively detailed exploration of Hughes’ notorious life in Hollywood including his romances with Katharine Hepburn, Ava Gardner, and scores of other actresses ranging from forgotten ingenues to revered icons.

You can also find footage of the H-1 trials in the 1940 aviation drama Men Against the Sky, distributed by RKO Radio Pictures, the company that Hughes would acquire eight years later.