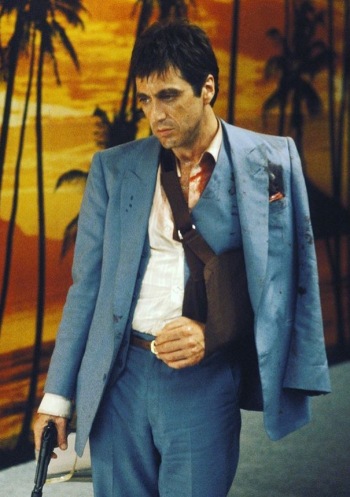 Miami, Florida, was incorporated as a city 121 years ago today – July 28, 1896. Today’s post focuses on one of the city’s most infamous fictional residents.

And, of course, that would be Tony Montana, the Cuban-born drug dealer portrayed by Al Pacino as he works his way to the top of the Miami drug world in the 1983 remake of Howard Hawks’ Prohibition-era pre-Code crime classic, Scarface.

As in the 1932 film, Tony’s swift seduction of the boss’ blonde moll leads to said boss ordering a hit on Tony’s life. Armed with his smooth young protégé and the element of surprise, an injured Tony heads to the oblivious boss’ office to confront him and force him into a confession. The boss desperately begs for Tony not to kill him; Tony agrees… then his protégé swings in and ends the boss’ life with a single shot.

The exact same scene description applies to both the 1983 film and its 1932 predecessor, where Paul Muni played the role of Tony Camonte, a hotheaded Mafia lieutenant rising through the Chicago Outfit à la Al Capone. Osgood Perkins played Camonte’s boss, Johnny Lovo, a thinly disguised version of the real-life Johnny Torrio. As Tony’s protégé Guino Rinaldo, George Raft’s first major cinematic role found him in a part that paralleled Raft’s own scrappy salad days as a crony of Bugsy Siegel and Owney Madden.

In 1983, Steven Bauer played the Raft role of Tony Montana’s protégé Manny Ribera, a fellow Cuban immigrant. Robert Loggia brought both charisma and just the right amount of sleaze to the role of Frank Lopez, Tony’s treacherous boss who meets his fate at the end of Manny’s gun. The ’83 update also adds a few new elements to the scene such as the presence of corrupt Miami detective Mel Bernstein (Harris Yulin) and Lopez’s burly bodyguard, Ernie (Arnaldo Santana), who sweats through the scene but lives after Tony presents him with the offer of a lifetime.

Sitting before Frank Lopez in his bloodied red, white, and blue, Tony Montana personifies the cutthroat nature of the American dream. His sky blue three-piece suit may have been appropriate for the pastel party atmosphere of The Babylon nightclub, but it also provided a stark palette for the bloodshed that would engineer his final pole vault into power.

This sky blue gabardine suit was made for the production by Paramount tailor Tommy Velasco. Like many of other Tony Montana’s three-piece suits, the single-breasted jacket has peak lapels, perhaps a nod to the fashions of the early ’30s when the original film was made as this style – though briefly revived in the ’70s – was falling out of fashion again by the early 1980s.

The peak lapels have dramatically slanted gorges and roll to the low stance two-button front, which Tony wears open throughout the suit’s time on screen. The shoulders are padded with roped sleeveheads, each sleeve ends with three buttons on the cuff, and the back is split with double vents. The straight hip pockets are jetted, and Tony wears a white silk display kerchief puffed in his welted breast pocket, but the lights of the nightclub reflect on the pocket square’s shiny satin finish and it often appears pink.

Tony’s arm seems to make a full recovery, but his suit will never be the same again.

The suit has a matching single-breasted vest (waistcoat) with lower welt pockets and a notched bottom. Tony wears all six buttons fastened… until the aftermath of his shooting when he wears it totally open under his jacket. The satin-finished back is covered in an indigo blue tonal foulard pattern with an adjustable strap to tighten or loosen the fit.

Tony wears his white-on-white striped silk shirt as open as he can with at least the top three or four buttons undone and the long-pointed spread collar draped over the collar of his suit jacket. The shirting is all white silk with double satin tonal stripes adding a touch of contrast.

The shirt has a front placket and single-button “Lapidus” pointed-tab cuffs, a popular detail in the era of the late ’70s and early ’80s that can also be found on the shirts of Roger Moore’s James Bond and Robert De Niro in Casino.

The flat front suit trousers have a medium-low rise and straight pockets along the side seams. When Tony opens his vest, we see the light brown leather belt he wears, hooked in the front with a Western-styled gold single-prong buckle.

Tony’s tan patent leather cap-toe oxfords make another appearance, worn with beige socks that create a boot-like effect. He previously wore these shoes with his gray silk suit and would later wear them with the cream three-piece suit he sports for his wedding.

It’s all fun and games until Octavio the dancing clown gets peppered with rounds from a set of MAC-10s.

Tony Montana festoons himself with gold jewelry to flash his status. He wears two yellow gold necklaces, a larger Cuban-style chain and a slimmer rope necklace on a longer chain, that both get plenty of screen time due to his low-buttoned shirts.

Manny clearly takes after his mentor Tony when it comes to how to best button – or unbutton – your shirt to show off any flashy gold jewelry you’ve got.

Tony also loads up his right hand with gold rings, wearing a diamond ring on his third finger and a ruby stone on his pinky.

Sign of success or excess? Tony flashes his double gold rings while conversing with the corrupt Mel Bernstein at The Babylon club.

A fashion plate like Tony Montana wouldn’t wear just any gold wristwatch. Tony wears a Omega La Magique watch in yellow gold with a small round black dial and a gold bracelet. Introduced in 1981, the La Magique was positioned as one of the thinnest watches on the market. Tony begins wearing it as a symbol of success, flashing it on his wrist at moments like his and Omar’s fateful first meeting with Sosa in Colombia.

Tony Montana would have been an aggressive bathroom monitor. 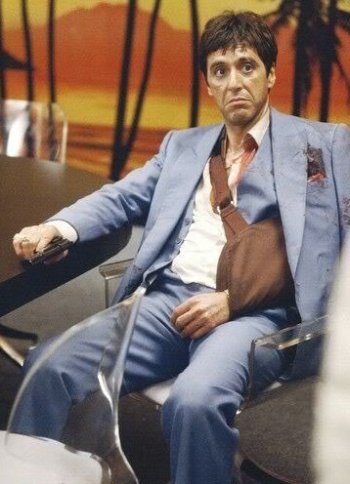 Tony Montana doesn’t plan on this simple visit to a nightclub to result in one of the biggest nights of his life, but he is nonetheless dressed for the occasion in his sky blue three-piece suit. Tailored for today and worn with a tie, this outfit could work just as well 35 years later.

By the time he gets back to Miami and is introducing Sosa’s henchmen to his “little friend”, Tony’s already ditched his tie and overcoat. The white silk pocket square stays in his breast pocket, though it certainly isn’t white by the end of the battle.

Tony Montana’s blue steel Beretta Model 81 pistol is as much a loyal companion to him as his pal Manny, carrying it from his first botched drug deal through to the film’s bloody climax.

Introduced in 1976, the Model 81 was the first in Beretta’s “Cheetah” series of compact blowback-operated semi-automatic pistols in low-to-medium calibers. The Beretta Model 81 and Model 82 are both chambered in .32 ACP, but the Model 82 has a slimmer grips to accommodate the single-stack 9-round magazine while the Model 81 has a double-stacked magazine that carries 12 rounds. Tony adds extra bulk to his Model 81 with wraparound Pachmayr grips. 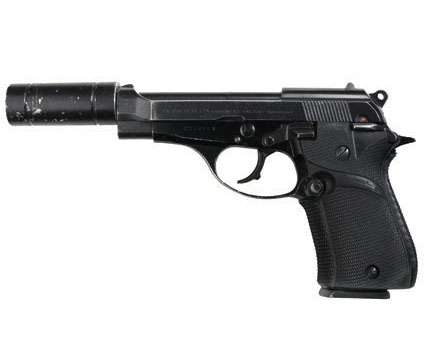 IMFDB has exclusive photos from The Golden Closet of one of the Beretta Model 81 “Cheetah” pistols used by Al Pacino in Scarface, serial #D87016W.

Tony uses his Beretta to great effect after he finds himself cornered by assassins at The Babylon club.

When a wounded but relatively unfazed Tony shows up at Frank Lopez’s office, he still carries his Beretta but it is now fixed with the suppressor that The Golden Closet noted was custom made for the film. Tony typically carries his Beretta in an IWB holster in the small of his back, but his shoulder sling provides a very convenient makeshift holster for Tony’s weapon after he is injured by Lopez’s hitters.

“He produces his Baretta [sic] from his sling and holds it in his left hand pointed at the big man,” wrote Oliver Stone the screenplay for Scarface, one of many script-to-screen details that was clearly part of Stone’s vision for the way the action would unfold.

Tony’s methods for dealing with cockroaches would not endear him to New York City landlords.

Three Beretta Model 81 pistols were rented to the Scarface production for Al Pacino’s Tony Montana to carry over the course of the film.

It’s a different Beretta, a suppressed Beretta M951, that Manny Ribera uses when he executes Lopez on Tony’s behalf. The M951 ended its nearly three decade production run in 1980, just a few years before Scarface was made, as its popularity was being eclipsed by the more modern Beretta 92 series of pistols.

… which also comes with a copy of the original Scarface from 1932!

A man who ain’t got his word… is a cockroach.