Don Draper’s approach to a white dinner jacket, typically reserved for summer, defines the attitude of a lighthearted and classy celebration. Take heed for any New Year’s Eve celebrations this week. 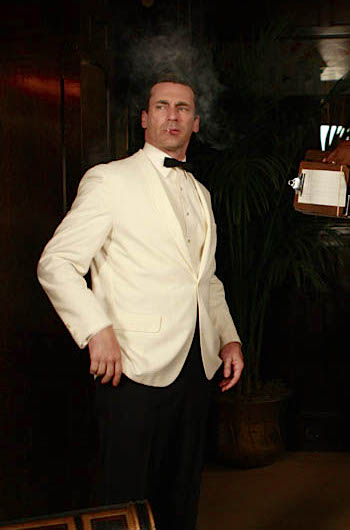 Jon Hamm as Don Draper, Madison Avenue ad man with a dark past

We’ve seen Don Draper at work and at play. But when he’s invited to a soiree at the Stork Club one warm Monday night, Draper channels James Bond and pulls out his summer dinner jacket.

By “The Gold Violin”, the seventh episode of the second season, Draper has engaged in a full affair with the wife of entertainer Jimmy Barrett. His professional life is on the rise and, as evidenced by his Cadillac, he’s “arrived”.

However, the party at the Stork Club proves to be a bad decision and marks the beginning of the end for Don and trophy wife Betty.

Don proudly struts into the Stork Club, Betty on his arm, wearing a ventless single-breasted dinner jacket. He looks like a strong and proud man of the ’60s, with sleek thin shawl lapels faced in the same material as the white jacket, save for satin-faced edges.

The jacket closes in the front with one button, just underneath the gentle rolls where the lapels meet. The open breast pocket is sans pocketsquare for the evening and the two hip pockets feature straight flaps. Each cuff is detailed with two buttons. 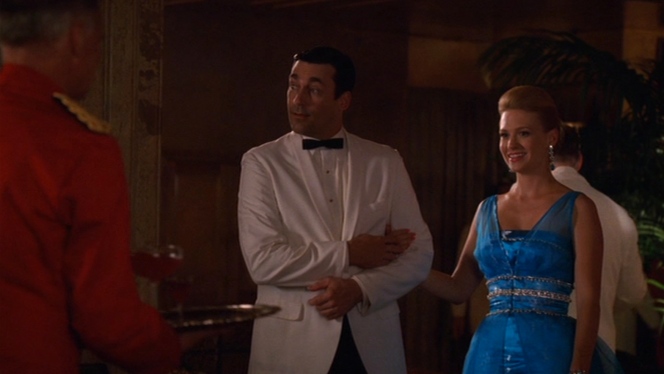 Want to make Don Draper’s eyes light up like that? Show him where the bar is.

Underneath his jacket, Don wears a white formal shirt with turndown collars and extremely thin pleats. The placket features a series of round gold studs that match the cuff links in Don’s double/French cuffs.

The thin black bow tie, height of ’60s American formalwear, recalls a passage from Chapter 8 of Ian Fleming’s Casino Royale, the book that introduced the world to James Bond:

As he tied his thin, double-ended black satin tie, he paused for a moment and examined himself levelly in the mirror.

It’s not hard to imagine Draper imagining himself in the same scenario.

I shat myself just making this screencap. Jesus, he looks angry.

Don’s black trousers are not seen too clearly, but they appear to have open side pockets and cuffed bottoms. Although formal trousers with a side stripe would be correct here, the side stripe isn’t visible in one of the few shots we get of Don’s pants.

His waist covering isn’t seen clearly, but – based on other episodes – he likely wears a black cummerbund. 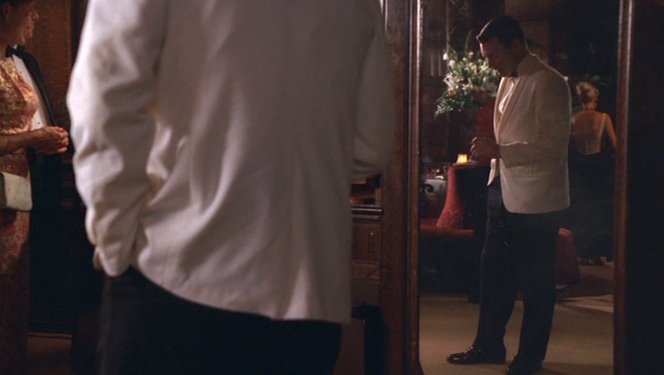 I’d make a joke here about two Dons and then something about The Godfather, but it would be unspeakably lame.
Here are Don’s pants, you guys.

So that‘s what “steely-eyed” means!

For an evening out at the Stork Club, Don takes advantage of lenient ’60s mores to look cool with a lit Lucky Strike in one hand and a cycle of Old Fashioneds in the other. 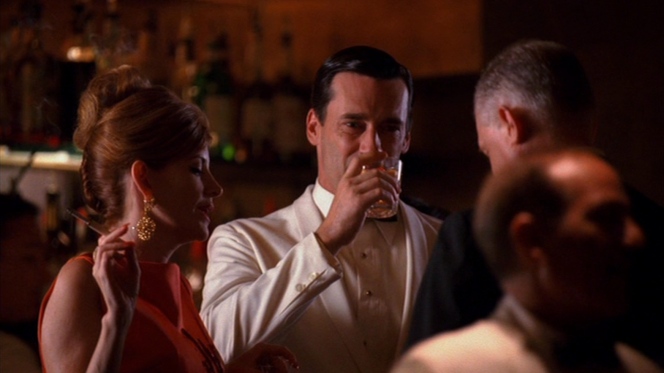 Also, Don follows the standard adulterer rule of standing to the left of his mistress but the right of his wife.

It’s a very distinctive ’60s look. If you can make it work, kudos and let us know; when it’s done right, it’s done very right:

How to Be Don

The lesson here is to remain unfazed. In the face of his domineering mistress in a crowd including her husband and his own wife, he smiles and takes a drink. After being confronted by a little schmuck he’s been cuckolding, Don stands firm and puts the man in his place with a simple “Excuse me?”

Also, how could ANYBODY support Jimmy Barrett?
Especially during his Bush League attempt to look like Don…

On the other end, want to shake up a guy like Don? Spontaneously vomit in his car… he’ll flip out by slowly moving his head to the right.

I don’t know what you think happened.