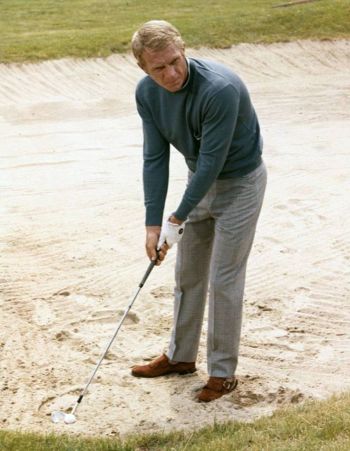 Steve McQueen as Thomas Crown, lining up the perfect shot on the links in 1968’s The Thomas Crown Affair.

The PGA Championship began yesterday at the Oak Hill Country Club in Rochester, New York. If you plan on grabbing your clubs before summer ends, see how Steve McQueen did it with casual flair in The Thomas Crown Affair.

When not planning multmillion dollar bank robberies, taking to the air in his private plane, or frolicking on the beach in his dune buggy, Thomas Crown heads to the links with his pals. More specifically, he heads to Belmont Country Club.

This was 1968, the club’s fiftieth year and a year of change for the club which had just installed a golf course irrigation system that they still use today. Additional changes at the time included the relocation of five holes due to construction of Massachusetts Route 2. The next year, 1969, legendary English golf course architect Alfred H. Tull remodeled the course again.

The club rules state that proper dress is required of men at all times, specifically forbidding jeans, spiked golf shoes, and collarless shirts. I’m sure this has always been the rule of the club, even through Crown shows up and plays in his casual, collarless T-shirt.

The whole scene, attire included, is a fine example of Crown’s laissez-faire attitude towards convention. So the club requires collared shirts? Forget it, he has money, he can do whatever he wants. So he makes three stupid bets in a row and loses a couple thousand dollars? Oh well, he has money, what’s it matter?

As a young and hip sportsman, Crown eschews the more traditional golf attire worn by his colleagues, such as cardigans and polos. Instead, Crown opts for a comfortable long-sleeve T-shirt and slacks.

His sky blue long-sleeve shirt absolutely evokes late 60s with its chest pocket and raised neck band. Both the top of the pocket and the crew-neck band are piped with a thin black stripe and a thin white stripe on the trim.

Some courses – including Belmont Country Club – don’t allow collarless shirts, but I have a feeling that a country club wouldn’t say no to a guy with Crown’s money.

Crown’s trousers are light gray flat front slacks with a complex blue plaid overcheck. They have frogmouth front pockets and flapped rear pockets with pointed flaps. Rather than a belt, Crown’s trousers have side adjusters to perfect the fit. They are long with a full break and sharp creases down the center of each leg. 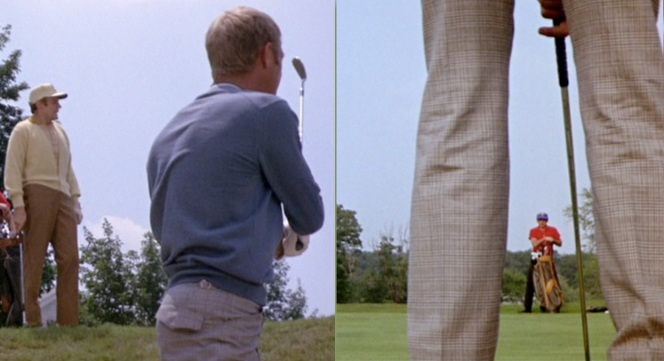 The trousers break over Crown’s brown Norwegian golf kilties with straps fastened through a small brass side buckle. Sean Connery would also wear a darker pair of kilties during the famous golf scene in Goldfinger.

Crown pairs his kilties with mustard-colored socks, the same ones that he wore with his desert boots and Harrington jacket when gliding in a later scene. 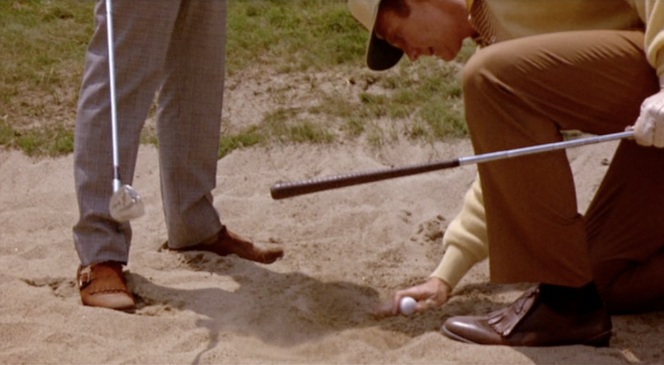 Although the rest of his dress is more unconventional, Crown’s shoes – by necessity – match those of his annoying “sucker bet” colleague.

And, of course, since he is golfing, Crown sports a white leather golf glove on his left hand. According to a few behind-the-scenes production shots, McQueen stuck the glove in his left trouser pocket when not needing it. In the film, he wears his glove the whole time.

Crown is no slouch when it comes to playing golf. However, he’s so expert either. If you plan on making some of the insane “sucker bets” that he does, try to back them up with enough skill to earn the smirk that McQueen so expertly wears.

And – again club rules permitting – try and stand out from your fellow golfers. Compared to him, McQueen’s pals look pretty milquetoast and bland – cookie cutter images of what golfers tend to look like. While avoiding John Daly’s example is key, there’s no harm in finding a cool, comfortable personal style without looking like your buddy’s dad. 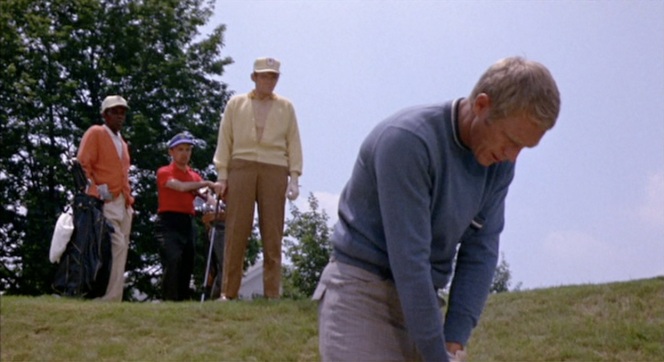 Norman Jewison must have told the other guys to stand at least twenty feet back or else they’d just be totally emasculated by Steve’s manliness.

Then again, if you can make a hole from being buried in a sand trap even once, you’re definitely pretty good.

Check with your club rules before trying to pull off a t-shirt on the links. Of course, if you have Thomas Crown’s money, you probably own the club. In which case, I doubt you’re reading my humble blog.

Update! In May 2019, Mason & Sons introduced a cotton mock-neck jumper inspired by McQueen’s golf garment from The Thomas Crown Affair. You can read more about their film-inspired golf collections here and place your own order for the Thomas Crown jumper here.

Check out the film.

What else can we do on Sunday?