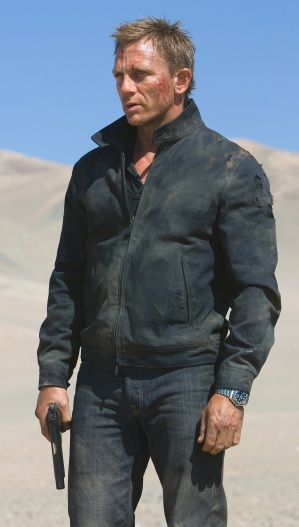 Daniel Craig as a dirty James Bond in Quantum of Solace (2008).

Recently, I covered Butch Cassidy’s attire while in Bolivia. Exactly 100 years later, James Bond was wreaking havoc on the country in Quantum of Solace. Of course, real Bond fans know that the film’s version of “Bolivia” was actually filmed in the Atacama Desert in Chile.

Some have complained about Bond wearing jeans for these scenes, but it’s actually very utilitarian and – come on already, people – this was 2008, not 1958. With some jeans costing thousands of dollars, albeit impractically, denim has come a long way from being the domain of the laborer.

This is the first time we see Craig’s Bond dressing intentionally for a showdown. Naturally, since he is not Pierce Brosnan, he opts for more casual attire than a tailored suit. In Casino Royale, we saw some great casual outfits including his dark polo in the Bahamas and his blue long-sleeve polo in Venice, but those were both for relaxing situations (or, in Venice’s case, what he thought would be a relaxing day).

Here, we again see Craig’s preference for dark blue polo shirts, but matched with a pair of jeans and a dark navy zip-up jacket that has become very popular with fans.

The jacket, designed by Tom Ford who created most of Craig’s Quantum of Solace wardrobe, was inspired by Baracuta’s G4 Harrington nylon jacket. The popularity of the Quantum jacket has led to the relaunching of the Baracuta brand in 2013, with Harringtons again available from Baracuta. Like the G4, Bond’s cotton Tom Ford jacket has a button-adjusted waistband and button-fastened slash pockets. The jacket zips up the front to an extended tab on the collar, which fastens with a button. The jacket also has cuffs that fasten with a buttoned tab.

His navy blue polo here is similar to the Sunspel polo worn in the Bahamas in Casino Royale, but this example is naturally by Tom Ford. Like the other, it has short sleeves, 2 dark buttons on the placket, and a chest pocket.

Dan runs, jacket off, sunglasses on, P226 in hand. If you’re wondering why you missed this in the film, you didn’t. This is a production photo.

Well, you probably never thought you’d see it, but James Bond wears jeans! Traditionalists are shitting themselves, while more progressive fans realize this is a natural step for a non-Pierce Brosnan Bond in a casual action situation. Jeans are actually a Flemingesque touch, as he had outfitted Bond in black jeans in Dr. No and brown jeans in “For Your Eyes Only”, although never blue jeans. Bond’s great-looking denim jeans are from the Los Angeles company 7 For All Mankind, which was formed in the fall of 2000. Bond’s jeans rise to his waist with a zip fly and are worn with a black Saffiano cross-hatch leather belt with a squared silver clasp. The belt was made by Prada, because of course, and it originally cost $270.

Bond’s bootcut jeans, colored in the dark blue “Mercer” wash, are still available on 7FAM’s website for $174. Unfortunately, the middle-of-the-road sizes 30-34 are out of stock, so if you’re on the slim or larger side, you’re in luck. I am a 32-33, so alas, I can never fulfill my dream of owning James Bond’s jeans. The jeans run small, as 7FAM advises, as they are 98% cotton and 2% Spandex. For those interested in saving money (especially if you’re on the slimmer side), the “Mercer” wash is also available in the straight leg jeans. Even for an athletic type like Bond, though, these would be too restrictive for someone who has to be running and jumping through a desert hotel.

I understand enforcing the no black/brown mixing policy, but hitting someone with a car for it is pretty extreme.

Craig keeps his usual casual footwear consistent, wearing a pair of brown suede Church’s Ryder III desert boots with Dainite® studded rubber soles for extra traction while doing a shit-ton more stunts than any normal person will ever have to do. James Bond Lifestyle features a great breakdown of these shoes, which he wears with a pair of black ribbed socks.

If you’re looking to stick with the Baracuta theme established by the jacket, Baracuta makes their own dark brown nubuck leather desert boots, which can be found here for the reasonable price of $74.93 (at the time of this writing). Like the Ryders, the Baracuta boots have two eyelets, but they lack the signature studded rubber soles.

“So I know you’re busy assembling that gun, but, uh, what do you think of my sunglasses? They’re great, aren’t they?”

Since this is Daniel Craig, we are again treated to a beautiful Omega watch, this one a stainless Omega Seamaster Planet Ocean 600m Co-Axial Chronometer. The case has a diameter of 42 millmeters. This is slightly more formal than the Casino Royale Planet Ocean, as it has a stainless bracelet and a black dial.

Omega: The Official Watch of MI6.

As I mentioned in the cardigan article from Quantum, this watch was auctioned by Christie’s for  £34,850 last year with all proceeds going to Unicef. Bond’s accessories – his watch, sunglasses, and boots – are all the same as he wore in that scene, actually.

The “Cervecita” beer that Bond drinks with Felix is a fictional label, as “cervecita” is just the Spanish word for a small beer. Since this was Bolivia, Bond and Felix would likely be indulging in a local brew, such as the popular Cerveza Paceña made by Huari, a very tasty South American beer if you ever find yourself in La Paz.

This is like the Spanish version of those after-school PSAs where you would see teens drinking a beer clearly labeled “BEER”.

Bond explores the various uses of navy blue. Now, so can you!

Iconic Alternatives has a great rundown of affordable options to channel elements of this and many other 007 outfits.

Bond attacks the hotel with a SIG-Sauer P226 he lifted from a fellow agent. Offered in 9×19 mm Parabellum, .357 SIG, and .40 S&W, the P226 has joined the ranks of the Beretta 92FS and the M1911A1 as one of the more venerable and commonly used pistols in world police and military arsenals. Evidently, it is one of the primary handguns for MI6 agents as it was also used earlier in the film by traitorous agent Craig Mitchell.

Look familiar? You’ve probably seen the P226 in most action movies made since 1990.

But I’m not going to talk about the P226 today. (At least not more than I have already.)

After fighting his way to save Camille in General Medrano’s room, Bond gets his hand on the general’s personal handgun, an ornate SIG P210 with gold inlayed engraving found on all P210s that were part of the 500 made for 50 Years Special Edition in 1999 to celebrate the pistol’s fifty years of service as the “P49” for the Swiss Army. 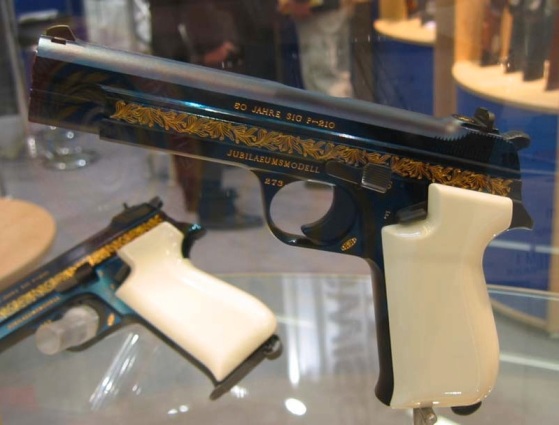 The “50 Years” commemorative edition of the SIG P210, as taken by Bond from Medrano’s room.

Originally manufactured by SIG Arms AG, which eventually became SIG-Sauer, the P210 is a short recoil operated semi-automatic pistol with a single-action locked-breech design. The 8-round magazine typically carries 9×19 mm Parabellum ammunition, as the example in the film does, with early variants also made in .30 Luger (7.65×21 mm Parabellum) and another variant, the P210-7, even chambered in .22 LR.

In 1937, SIG acquired a license for Charles Petter’s system and, based on Petter’s French Mle. 1935A pistol, developed a weapon to replace the Luger, which had been in service since 1900. The prototype of the P210 was the SIG 44/16, developed in 1944 with a 16-round magazine (Oh, so that’s how they came up with that…) After testing various models after the war, the P210 was introduced to the world in 1949. It was made continuously until 2005, by which time it was made by Swiss Arms AG, the company formerly known as SIG Arms AG. Throughout its life, the standard P210 had a 8.5″ inch overall length with a 4.7″ barrel, much like most standard full-size combat pistols, although the sports variant (P210-5) has an extended barrel that measures 150 mm, rather than the standard 120 mm barrel.

Medrano, supposed to be a rogue Bolivian military officer, certainly wouldn’t have been in the Swiss Army, but it is likely that his deluxe P210 is a gift from a fellow military colleague. Also, the filmmakers probably thought, “Damn, this gun would look badass in Bond’s hands.” They were correct.

So badass, in fact, that they used a behind-the-scenes photo of Dan playing with the P210 as the cover for the game James Bond: Blood Stone!

Take a deep breath, you only got one shot, make it count.

Thanks to James Bond Lifestyle and Matt Spaiser’s The Suits of James Bond for filling in the gaps of info needed and confirming styles and brands. These two invaluable resources should be on the bookmarks bar for any Bond fan!

Also, unrelated note, but today is my grandma’s 92nd birthday. She still finds time to work every day and cook family dinners on the weekends. Happy birthday, Grandma!