When he wasn’t sporting his trademark brown henley and cargo pants for a kill, Dexter Morgan dressed very fashionably and practically for his tropical surroundings. The second season of Dexter, lauded by fans as one of the best, finds Dexter confronted by his gruesome habits and branded the “Bay Harbor Butcher”. Since Dexter had killed more than fifty victims by the time the season started, any police department would be way over their heads with such a discovery, let alone the totally incompetent Miami Metro Police Department of the series. The MMPD calls in the FBI, notably eccentric super agent Frank Lundy.

By the fourth episode, “See-Through”, Lundy and his task force – which now includes Dexter’s sister Debra – are ramping up their case against the Butcher. Although it’s never explicitly stated, the episode technically takes place on St. Patrick’s Day. (Zooming in on a newspaper dateline reveals that it is “Saturday, March 17, 2007.”

Since a Miami spring is comparable to a Pittsburgh summer (I’m from Pittsburgh), Dexter’s outfit would be a very comfortable and appealing choice for the season.

Dexter’s daily attire is typically a light-colored shirt – often a pastel – and khakis. While it’s a look that works for some men, it can also make some look like a popsicle. However, dark clothing is known to absorb sunlight and wouldn’t be comfortable or practical during a warm Miami spring. Dexter wisely skirts this issue by sporting a dark blue linen shirt with his slacks in “See-Through”. 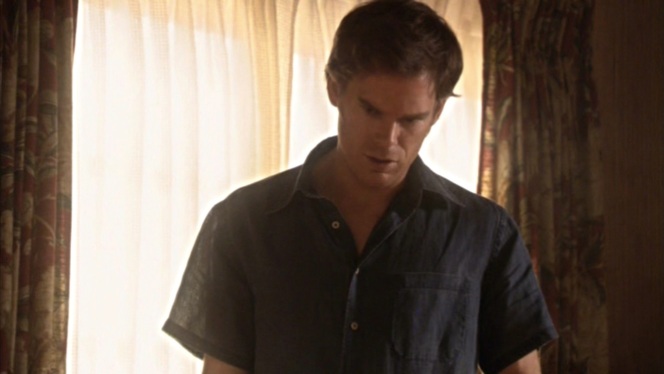 This shirt is a pretty appropriate choice given the episode title.

Something about this particular look stuck out to me as I was revisiting the series recently, perhaps because it isn’t as loud as some of his other casual attire and seems more in line with something I would wear.

Despite being dark blue, the linen shirt freely allows air to pass through and keeps Dexter cool in a climate with daily mean temperatures around 75°F (which makes his preferred choice of a dark long-sleeve thermal even more puzzling!)

Dexter’s shirt has cuffed short sleeves and buttons down a plain front with seven white buttons, attached with dark blue threads. The casual shirt is meant to be worn untucked – as Dexter does – with a straight hem around the bottom and short vents on each side.

Both the large spread collars and the patch breast pocket with its mitred bottom have stitched edges visible. There is a solid yoke across the rear with side darts.

Dexter pairs the shirt with his usual trousers, a pair of khaki cotton flat front chinos from Banana Republic’s “Dress Chino” line.  The trousers have plain-hemmed bottoms with a slight flare.

Although not seen clearly here, auction house photos of the trousers reveal that they indeed have tall belt loops, although Dexter often ignored wearing belts. The trousers have on-seam side pockets and jetted rear pockets, with the right rear pocket fastening through a button loop. 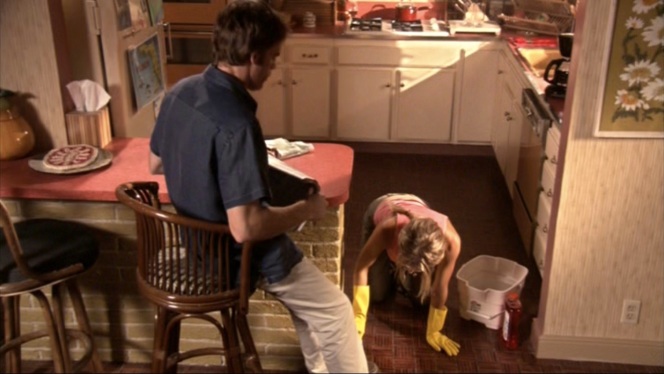 A bit inconsiderate of Dexter not to get down and help…

According to the auction, Hall’s pants measured 32″ waist x 32″ inseam.

Dexter’s shoes are a pair of brown sueded leather 2-eyelet desert boots, much like Steve McQueen was known to wear. The shoes may be from J. Crew, which also provided a pair of lighter brown boots in the previous episode.

Dexter’s desert boots are only briefly seen as Lila commits a bit of larceny.

Dexter’s watch is his usual steel Waltham Self-Winding 25 Jewel on an expanding bracelet. In the show’s narrative, Dexter inherited the watch from his foster father Harry, who was also seen wearing it in flashbacks.

“Please tell me I don’t have to end this show six years from now by inexplicably sailing into a tropical storm and emerging as a lumberjack. Please.”

Although it was an inexpensive watch back in its day (I’ve read that it cost around $30 in the ’70s), they’ve become difficult to find lately as Dexter fans have sought them out and scooped them up.

Dexter’s beer of choice in the second season is Presidente. It’s one of the few actual beer brands to be used on the show, which typically opts for the more generic labels offered from prop houses like Earl Hays Press or ISS.

It’s hard to think of a better way to relax in the summer than indulging in a cold beer from the Caribbean.

Presidente is a Dominican pilsner with a 5.0% ABV. Although it is brewed in Santiago and named in honor of the Dominican president, its origins are more American with U.S. industrialist Charles H. Wanzer founding the brewery in 1929. Presidente was first brewed six years later and was initially a dark beer, but it became even more successful in the 1960s when it was transformed into a pilsner.

Dexter keeps several bottles of it in his house, and both he and Debra are seen drinking Presidente throughout the second season. 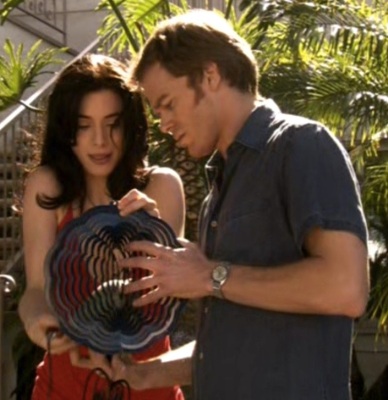 Dexter doesn’t let oppressive heat stop him from comfortably wearing a dark shirt, and neither should you!

Buy the second season. Most fans would say the show isn’t worth watching after the fourth or fifth season finales, but – as a TV loyalist – I can’t start a show without finishing it, especially a once-great one like Dexter.

Although Dexter’s voice-over would grow irritatingly obvious in later seasons, it was used to great effect – both dramatically and comedically – early in the show’s run.

Rita reads about the Bay Harbor Butcher, naturally unaware that she is dating the butcher himself…

Rita: It makes me so angry that there’s some monster out there scaring my son.
Dexter: I got to go to work.
Rita: You know, I hope they catch him today. And I am not a violent person, but I hope they hurt him… Have a good day.
Dexter: (voice-over) Make up your mind! 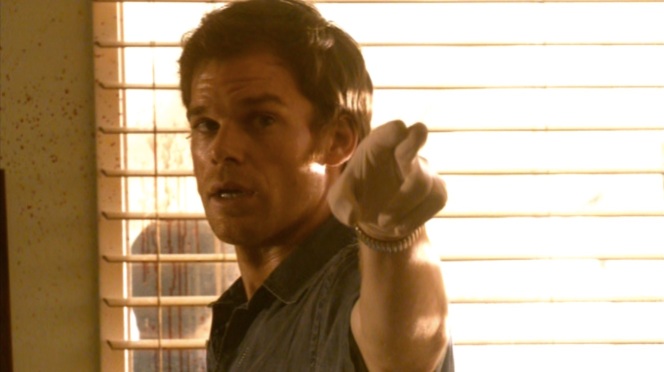 Of course, the look is completed with a pair of white latex gloves, but I would hope you would use them for less nefarious purposes than TV’s favorite serial killer did.