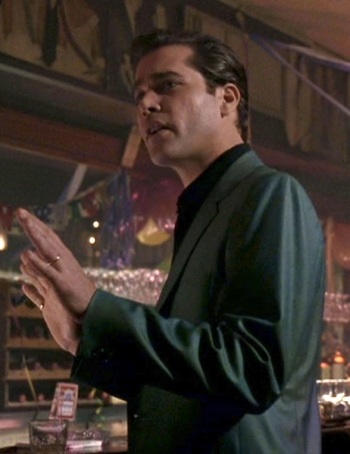 As Morrie Kessler’s favorite “half mick, half guinea”, it’s nice to see Henry Hill channeling his Irish side with a green suit while out at a bar. In particular, his bar – The Suite Lounge in Queens. (In reality, the scene was filmed at the Lido Cabaret at 7320 Grand Avenue in Maspeth.) Unfortunately for us, it wasn’t St. Patrick’s Day, and unfortunately for Billy Batts, an angry Joe Pesci was around.

This scene, one of the most iconic of the film, marks the shift in tone between the “glamour” of the wiseguy era in the ’60s and the harsh and violent reality of the ’70s as it all comes crashing down. The first portion of the film may explain why Henry’s biggest ambition was to be a gangster as we see an endless parade of sharp suits, champagne on the house, and big-haired and bosomy mistresses.

After Billy Batts, the suits are replaced by prison uniforms (or worse, polyester disco shirts), the champagne becomes drugs, and the mistresses become strung-out coke whores who stab you in the back. The scene and its repercussions teach us an important lesson: don’t kill, kids.

For Billy Batts’ release party (and subsequent murder) in his bar, Henry Hill wears a green suit with a distinctive shine that implies either silk or possibly a mohair/silk blend. The suit is a two-piece with moderate features appropriate for 1970, a sartorial transition period between the ultra-slim ’60s and excessively wide ’70s.

The suit jacket is single-breasted with notch lapels that roll down to the low 2-button stance. Both the buttons on the front and the two buttons on each cuff are constructed of dark plastic, likely black. The shoulders are slightly padded with roped sleeveheads.

Obviously, Henry’s attempts as a conflict mediator leave something to be desired.

The flat front suit trousers rise high on Henry’s waist with a straight fly and sharp creases down each slightly tapered leg to the plain-hemmed, full break bottoms. The slanted side pockets are visible, but Henry only removes the jacket when digging Batts’ grave so it’s hard to determine the rear pocket situation. He wears a black leather belt with a steel single-prong buckle through the trousers’ belt loops.

Henry’s suit is illuminated as Jimmy takes care of the Billy Batts situation.

Henry wears a black shirt, a popular choice for a casual suit on a night out, created for the film by Geneva Custom Shirts of New York. Geneva confirmed via Instagram in March 2018 that the material for this particular shirt was Swiss voile. Broken white edge stitching is visible on the shirt’s wide placket in close-up shots, and the white mother-of-pearl buttons provide a nice contrast against the black shirting in lieu of a tie.

Poor Henry looks so tired, and then Jimmy and Tommy make him go and dig a grave.

The shirt’s long sleeves close with a single button, and the straight hem is revealed when Henry untucks the shirt to dig Batts’ grave. The material is hard to determine, but it appears to be polyester.

His leather shoes are also black, and – although they don’t receive much screen time – they appear to have a cap toe and a lace-up throat. He also appears to be wearing black socks, which I think is a good choice as the green suit isn’t neutral enough to warrant green socks.

The gold watch on his right wrist is supposedly a Rolex Day-Date, although I can’t tell for sure from the angles we are given. It is certainly a gold case with a round white dial on a flat gold bracelet; I have typically seen Day-Dates worn on thicker link bracelets, but it’s possible that this was swapped out for Henry.

Henry’s watch is best seen as he goes to investigate the rumbling from his trunk.

Henry sticks with gold jewelry, also wearing his usual pinky ring on his right hand and his plain gold wedding band on the third finger of his left hand.

Underneath, he is likely wearing one of his usual white ribbed cotton sleeveless A-shirts.

Since Henry doesn’t actually do any killing in this scene (glossing over his enabling, clean-up, and other general accessory duties), it’s fine to have a Henry Hill-style night out. We’ve already got the outfit down, so now all you need is the right cigarettes, the right car, and the right music.

And, of course, the right breakfast.

Henry’s smokes of choice are soft packs of Winston Full-Flavor filtered cigarettes with a gold lighter. At the time, Winston was the most popular cigarette brand in the United States, holding its position from 1966 until 1972 when it was eclipsed by Marlboro, who has remained the market leader to this day. It’s also somewhat telling that Henry’s cigarette brand was in its prime whenever he was… and it lost its popularity once things got bad (prison, drugs, killings, witness protection, etc.).

I know it’s not Car Week, but I have to show my appreciation for Henry’s fine choice in American machinery. For the bulk of the film, Henry drives a dark brown 1968 Pontiac Grand Prix with a white hardtop. 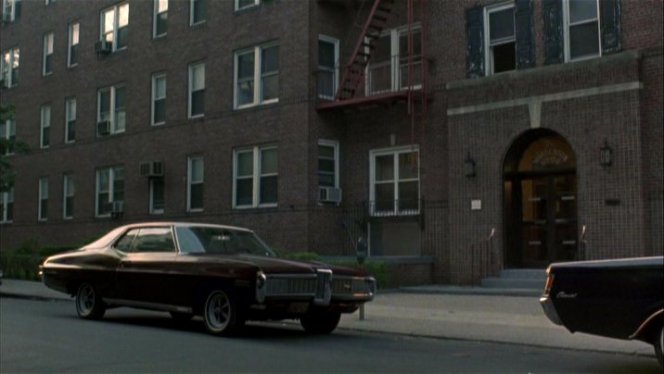 Henry’s ’68 Pontiac, parked in front of his goomah’s place.

’68 was a special year for the Grand Prix, a transition between the first two generations of body styles and the final year for the B-body platform full-sized Grand Prix. Since the convertible model had just been discontinued, the only option was the 2-door hardtop coupe, which Henry drives here. Engine options were the standard 400 cubic inch V8 with 350 horsepower, but an optional 428 was available with base 375 horsepower or a High Output (HO) 390 horsepower version. In reality, Hill drove a new 1970 Buick Electra, but all that you really need to take away from the scene is that the trunk was pretty much ruined after hauling Batts’ rotting corpse back and forth.

And finally, the music. Goodfellas has one of the greatest soundtracks of any movie, and this scene features two classic songs that nicely indicate the scene’s tone-changing effect on the rest of the film. The party is seen in high gear to the upbeat 1963 track “He’s Sure the Boy I Love” by the Phil Spector-produced group The Crystals.

Hours later, when Tommy returns to kill Batts and set the crew on its fatal course, the darker and deeper “Atlantis” by Donovan is used to punctuate the brutal murder.

Bonus points to anyone who can quickly – and correctly – pronounce Barabajagal, the name of Donovan’s 1969 album that contained the song.

Whiskey is the order of the night for Jimmy and his crew, although he, Henry, and Tommy are more often seen drinking Crown Royal (Canadian), Cutty Sark (Scotch), or J&B (Scotch again) than anything Irish. Since Jameson will likely be flowing at your local bar on March 17th, feel free to down a shot or two with your local Irish hoodlums. 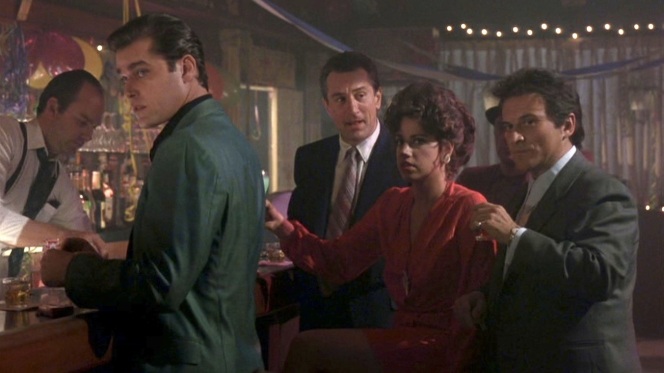 St. Patrick’s Day falls on a Tuesday this year, so it’s unclear whether or not to bring your wife (Saturday) or your mistress (Friday).

Now go home and get your fuckin’ shinebox.

As far back as I can remember, I always wanted to be a gangster. To me that was better than being president of the United States. To be a gangster was to own the world.

Curious about what really happened to Billy Batts? It’s not that different from what Goodfellas shows us, although the film wisely condenses the action to one night rather than over the course of a couple weeks. As found on Tommy DeSimone’s Wikipedia page…

In the book Wiseguy, Henry Hill said they threw a “welcome home” party at Robert’s Lounge, which was owned by Jimmy Burke, for William “Billy Batts” Bentvena (confused as William Devino), a made man in Carmine Fatico’s crew (the same crew John Gotti was a part of) in the Gambino crime family.

Bentvena had just been released from prison after serving a six year term for drug possession. Hill states in Wiseguy that Bentvena saw DeSimone and asked him if he still shined shoes and DeSimone took this as an insult. Hill also said that Bentvena provoked DeSimone because he wanted to impress some mobsters from another crime family. A couple of minutes later when that issue was going to be forgotten, DeSimone leaned over to Henry Hill and Jimmy Burke and said “I’m gonna kill that fuck.” Hill saw that he was serious about it. A couple of weeks later, on June 11, 1970, Bentvena went over to “The Suite” owned by Hill in Jamaica, Queens to go drinking with DeSimone’s crew, including Hill, DeSimone, and Jimmy. Later that night DeSimone took his girlfriend home and Burke started making Bentvena feel comfortable. Twenty minutes later, DeSimone arrived with a .38 revolver and a plastic mattress cover. DeSimone walked over to him at the corner of the bar and attacked Bentvena. Before Bentvena was attacked, Jimmy Burke tightened his arms around Bentvena and he was pistol whipped with the .38 revolver. He was so inebriated that he couldn’t defend himself.

In the book Wiseguy, Hill said that before DeSimone started to beat Bentvena, DeSimone yelled, “Shine these fucking shoes!” DeSimone killed Bentvena not only because he had insulted him, but also because Burke had taken over Bentvena’s loanshark business while Bentvena was in prison. According to Hill, Bentvena had been complaining to Joseph N. Gallo about getting back this racket. Not wanting to return the business to Bentvena, Burke knew sooner or later Bentvena would have to be killed. After the beating, the three men put Bentvena into the trunk of Hill’s 1970 Buick Electra and later while the three men were driving on The Van Wyck Expressway, they discovered that Bentvena was not dead. Later, they visited DeSimone’s mother’s house to get a knife, lime, and a shovel. Later in the drive, closer to their destination, Hill said it had been an hour of DeSimone driving and he kept getting mad about the noises in the trunk and finally slammed the brakes and leaned over for the shovel and that Burke and DeSimone “didn’t actually shoot him, they just stabbed him, thirty or forty fucking times, fucking horrible.”

Hill does not mention a knife, but claims Burke and DeSimone finished Bentvena off by beating him with a tire iron and the shovel, respectively and the men later buried him under a dog kennel. At the time of the murder in 1970, Bentvena was 49 years old and was a respected and a feared made man in the Gambino crime family, as well as a personal friend of future Gambino boss John Gotti. Murdering a made man without the official consent of his family’s leadership was an unforgivable offense in the Mafia code of omerta, especially by a rival family and a mere associate such as DeSimone, and it was this murder (after the Gotti crew definitively tied DeSimone to the killing) that led to DeSimone’s own murder as retaliation.