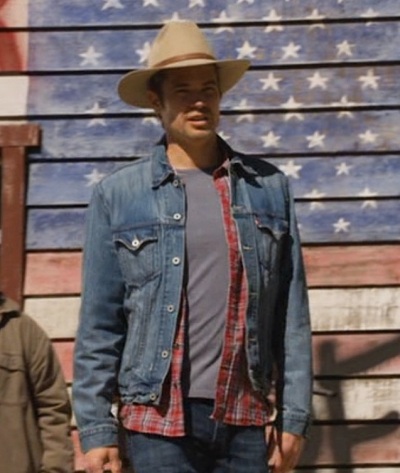 When America needed an American hero, Elmore Leonard gave us Raylan Givens. An independent-minded, old-fashioned, and gun-handy lawman, Raylan sees himself more as John Wayne than John McClane. The series began by establishing him as a no-nonsense U.S. Marshal who backs up his word when he gives a “gun thug” 24 hours to leave town. Once he’s transferred back to his birthplace among the blue-collar hillfolk of eastern Kentucky, he’s far more at home in his cowboy hat, riding boots, and jeans than he was in Miami.

The first few episodes allow both the show and Raylan to find a groove with a more episodic format before settling into a more serial narrative for the rest of the show’s run. Although “case-of-the-week” shows can grow irritating, Justified made the most of it with clever plots worthy of Elmore Leonard himself and colorful guest stars that helped the content stand out far more than your standard Law and Order or CSI could even aspire to, all the while dropping hints about Raylan’s backstory before it all comes to a crescendo later in the first season.

Though he always dresses up on duty in at least a sport coat and tie, Raylan prefers simpler denim-happy casual attire befitting his bucolic roots. To celebrate the 4th of July tomorrow, BAMF Style is going to pull examples from three episodes – “Fixer”, “The Collection”, and “Full Commitment” – that show how Raylan incorporated red, white, and blue into his typical “denim sandwich”.

Raylan Givens is a master of a look that is often considered a sartorial “no-no” due to the endless possibilities of getting it wrong – a denim jacket and jeans. 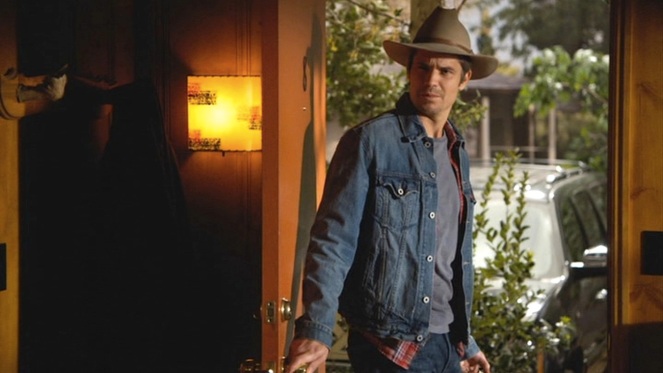 Raylan displays bafflement that his simple country style made it onto a blog celebrating sartorial excellence.

This look is known by many names ranging from the Texas Tuxedo and Canadian Tuxedo (which would’ve been more appropriate when Olyphant played Canadian-born Seth Bullock on Deadwood) to double denim and, my favorite, the denim sandwich. Raylan sports a denim sandwich often and in each of the show’s six seasons, sometimes even with a wool overcoat over it to soften the look.

Raylan sports this denim jacket and jeans look in at least five separate combinations. The most common shirt accompaniment by far is a dark blue henley, although he also wears dark layered shirts, a dark shirt over a light-colored henley, and even a purple shirt on many different occasions based on the episode and context. Since we’re celebrating the 4th of July, BAMF Style is gonna take a look at an All-American red, white, and blue look as Raylan pairs his denim sandwich with red, white, and blue plaid shirts.

First – the jacket. The familiar red “e tab” tag on the left pocket flap tells us that this is a genuine Levi’s trucker jacket constructed of blue stonewashed denim. The jacket has horizontal front yokes that end below the second button and just above the pockets. The back has a separate yoke with horizontal stitching across the shoulder blades. The fit is straight and comfortable, hitting just below the hip. Two vertical seams extend down from the chest pocket top to the adjustable waistband.

Raylan’s jacket has four outer pockets. The two patch pockets on the chest are pointed with more dramatic Western-style pointed flaps that close through a steel button. The two lower pockets on each side are welted for easy hand access; the handwarmer pockets were added to Levi’s denim jackets in mid-1980. The waistband is slightly adjustable with a small buttoned strap on each side. Raylan wears his jacket cuffs buttoned. All buttons – including the six buttons down the front – are aluminum stud buttons.

Although Raylan’s particular jacket is no longer available from Levi’s, their popular Trucker Jacket has been “leading the pack” since 1962 – according to the Levi’s site. Denim Hunters has a helpful guide if you’re curious when your vintage Levi’s denim jacket was made.

The denim sandwich is Raylan’s favorite off-duty look, and he twice sports it with two different red, white, and blue plaid shirts. The first instance is during the final scenes of “Fixer” (Episode 1.03) when he pays Ava a late night visit. The second instance is for most of “Full Commitment” (Episode 2.11) when Tim is assigned to guard him all day.

Raylan shows various degrees of enthusiasm based on his audience.

Both plaid shirts have long sleeves with button cuffs, black buttons down a front placket, and double patch pockets that close on the chest with buttoned flaps.

We see much more of the “Full Commitment” plaid shirt; this shirt has a warmer red flannel ground with a fine white and blue shadow plaid overcheck. The overcheck rotates 45° on each pocket to create an “X” plaid illusion. This shirt is also reinforced with a light blue-gray lining that calls out the gray shadow of the blue check. The chest pocket flaps are slim with rounded corners. Raylan wears the cuffs unbuttoned but only rolls the shirt partially up past his wrist. 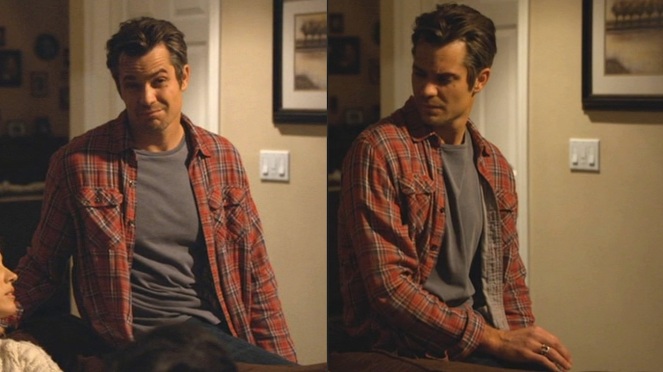 Raylan wears the “Full Commitment” shirt open to reveal a gray cotton crew neck t-shirt. This short-sleeve t-shirt is a solid medium gray rather than the commonly seen heathered gray. He always sports a white ribbed cotton sleeveless undershirt as his base torso layer.

Raylan also sticks with his usual footwear, a pair of dark brown anteater Western-style cowboy boots from Justin with decorative stitching on the calf leather shafts, his primary footwear for the first two seasons before switching to custom Lucchese ostrich boots for the third season onward.

Matthew McConaughey isn’t the only American BAMF on TV who prefers Lincolns.

Raylan sticks with the matching belt and shoes rule by wearing a brown tooled leather belt. Both on and off duty, he carries his Glock 17 in a tan-finished full grain leather Bianchi Model 59 Special Agent® thumb break paddle holster. His particular model would be the #19128, which is fitted for a right-hand shooter carrying a 4.49″-barreled full size Glock. 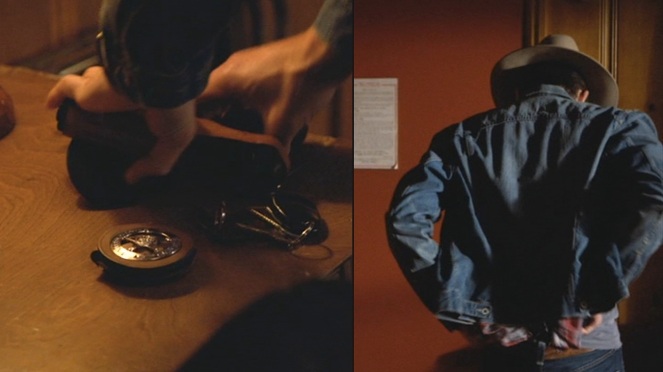 Raylan keeps his accessories simple. On his left wrist is the same TAG Heuer Series 6000 Chronometer wristwatch that he wears throughout most of the show with its brushed steel case, white dial, and brown alligator strap. (Thanks to Teeritz for the definitive ID!)

Despite the abundance of hardened criminals and murderers in Raylan’s orbit, most Justified fans agree that there’s no one worse than GARY.

Raylan also wears his sole piece of jewelry, a silver horseshoe ring, on the third finger of this right hand.

…or go to Kentucky for a true Raylan Givens breakfast.

Ever the individualist, not just any ice cream will do for Raylan’s breakfast. He specifically hunts down Chaney’s, which USA Today voted the #1 ice cream in Kentucky.

“Plus, these guys carry Chaney’s.”

Chaney’s Dairy Barn is located in Bowling Green, about 230 miles west of Harlan. The Chaney family had lived on the farm since 1888 and became a dairy farm in 1940, but it wasn’t until September 2003 that Chaney’s Dairy Barn opened to a receptive public. According to Chaney’s Dairy Barn’s Facebook page, the Justified team reached out to Chaney’s to get them on the show. Either way, its appearance on the show is certainly a nice nod to its locale (especially when accompanying the Ale-8-One bottle signs in the background).

Even though he’s technically suspended in “Full Commitment”, Raylan still makes good use of his Glock 17 sidearm. Although he identifies it earlier in the series as a “.45 Glock” (suggesting a Glock 21), a closer look at the bore and the “17” imprint on the sides confirms that he indeed carries the 9×19 mm Glock 17.

If only Raylan would’ve turned around and shot Gary, the world would have been a happier place.

While Raylan’s choice of a full-size Glock is correct, the issued sidearm for the U.S. Marshal Service is actually the .40-caliber Glock series (full-size 22, compact 23, and subcompact 27 for backup).

Raylan’s cowboy-infused denim sandwich is epitomic of his old-fashioned American spirit. It takes a certain kind of man with a certain kind of confidence to strut around in double denim with a cowboy hat and boots, but we can all agree that Raylan is just the sort of man who can pull that off. Can you?

For a more casual or cooler day when he wears his shirt open, Raylan opts for a crew neck gray t-shirt rather than the more revealing white sleeveless undershirt.

Check out the entire series. The screenshots featured here are from the first

If you’re looking for these episodes in particular…

As long as you understand that the next time we have this conversation, there won’t be a conversation.