Labor Day marks the approach of colder weather. For Mafia Monday, Tony Soprano shows off how to dress for versatile situations in chillier fall and winter weather.

A staple of Tony Soprano’s wardrobe is a number of boldly checked jackets and sport coats. On occasion during the second, third, and fourth seasons, he wears a sport coat with a large-scale Glen Urquhart check, consisting of a large brown houndstooth check against a smaller cream and brown woven check. 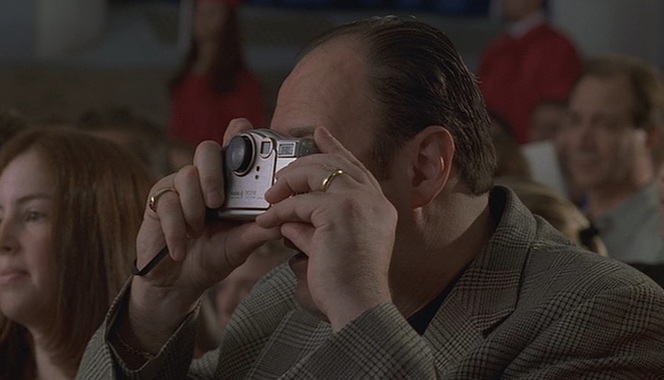 Tony takes advantage of a picture-perfect moment during his daughter’s high school graduation in “Funhouse” (Episode 2.13).

Tony’s brown Glen Urquhart check sport jacket is cut to be flattering for James Gandolfini’s larger size. It is single-breasted with notch lapels and a 3-roll-2 button stance. The light brown urea buttons match the four buttons on the cuff of each slightly-too-long sleeve. The wide shoulders are padded with sleevehead roping. The front is darted, and the back is ventless. The sportcoat has straight flapped hip pockets and a welted breast pocket where Tony often wears a display kerchief in its later appearances. 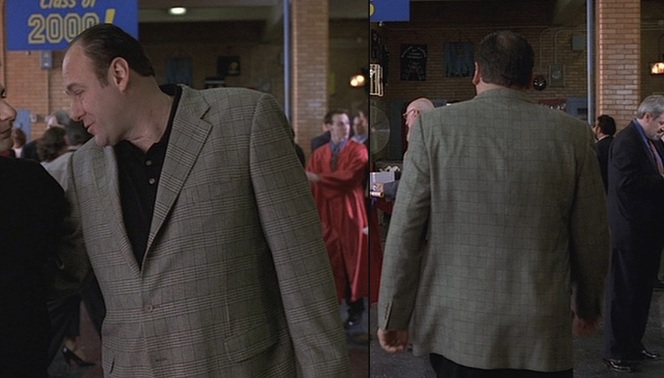 Tony makes the rounds during the post-graduation party in “Funhouse” (Episode 2.13).

In a September 2014 interview with The Independent, the show’s costumer Juliet Polcsa noted that, as he got heavier over the course of the show, James Gandolfini was less comfortable in closer-fitting knit polos and so he would be outfitted more frequently in button-up shirts. Although this was a practical decision informed by his size, it also had the benefit of reflecting greater prestige as Tony’s power grew in the underworld.

During both of the jacket’s second season appearances – which Tony wearing it to a therapy appointment, a strip club, and his daughter’s graduation – he wears it over a black soft short-sleeve polo shirt with three light brown urea buttons. The soft, comfortable fabric of the shirt may be cashmere.

Tony listens to some tough advice in “Funhouse” (Episode 2.13).

Tony wears his black polo tucked into black reverse-pleated trousers for these occasions as well. They have side pockets – and likely jetted back pockets – and bottom cuffs. He wears them with a black leather belt with a squared steel single-claw buckle. Due to the black in the rest of his outfit, Tony also wears a pair of black leather 5-eyelet split-toe bluchers and black ribbed wool dress socks.

Beginning with the jacket’s third season appearances, Tony begins embracing the earth tone possibilities and incorporates more brown into the rest of his wardrobe. For a visit to his uncle’s oncologist in “Second Opinion” (Episode 3.07), Tony wears a white mock-neck silk knit shirt with a taupe pick-stripe texture across the chest.

Dr. Kennedy should think twice before giving the Soprano family another questionable opinion.

Two episodes earlier, in “Another Toothpick” (Episode 3.05), he wore a similar black mock-neck knit shirt during a dinner out to Vesuvio. 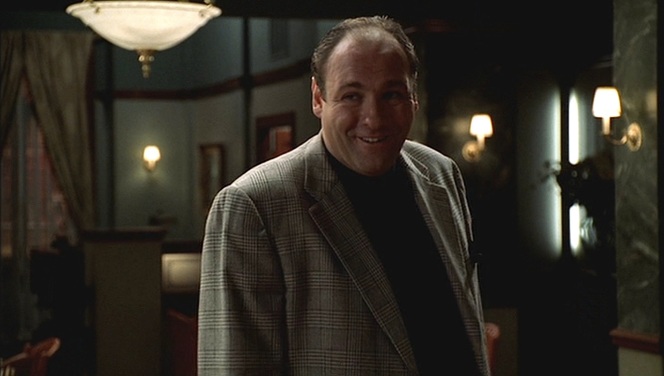 For a dressier Vesuvio dinner with the guys in “…To Save Us All from Satan’s Power” (Episode 3.10), Tony wears this jacket with a shirt and tie. His plain white dress shirt has a spread collar, a front placket, a breast pocket, and French cuffs. His gold silk necktie is textured by a gold self-grid, and he further accents his outfit with a salmon-colored silk display kerchief in the jacket’s breast pocket. I believe that this is the sole time that Tony wears a tie with this jacket. 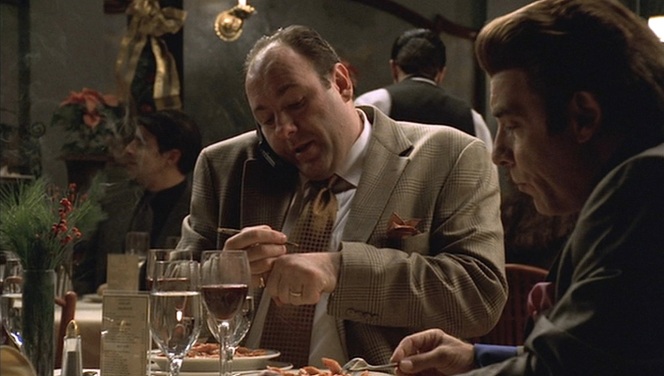 Three episodes later, in “Army of One” (Episode 3.13), Tony returns to therapy in this plaid jacket with a dark gray ribbed knit long-sleeve polo shirt with three brown plastic buttons below the large, open collar. Worn with a pair of dark charcoal pleated trousers, it reflects the look of his earlier-mentioned therapy appointment in “Toodle-Fucking-Oo” (Episode 2.03). A light gray silk kerchief pokes out of the jacket’s breast pocket.

Another dark polo and trousers for therapy in “Army of One” (Episode 3.13).

This Glen Urquhart jacket makes its final appearance in “Mergers and Acquisitions” (Episode 4.08) when Tony wears it to therapy with a slightly wrinkled white herringbone-striped cotton dress shirt with a spread collar. The French cuffs are fastened by a pair of double-ridged gold cross cluster links. 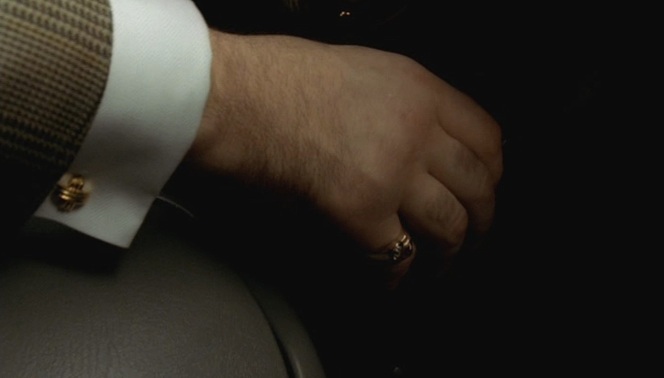 Unlike the earlier white dress shirt, it has a plain front and no breast pocket. He also wears it without a tie, although the brown silk display kerchief in his jacket’s breast pocket adds some flair.

In “Second Opinion”, “…To Save Us All from Satan’s Power”, and “Mergers and Acqusitions”, Tony nicely balances the light and dark browns in the plaid sportcoat with a pair of medium brown double reverse-pleated trousers, styled like most of his other pants with side pockets, button-through jetted back pockets, and cuffed bottoms. Through the belt loops, Tony wears a brown leather belt with a square gold-toned single-claw buckle. His shoes and socks go unseen, but they are likely also brown.

After the Vesuvio dinner in “…To Save Us All from Satan’s Power” (Episode 3.10), Tony undresses to get into bed with Carmela and shows off a pair of light gray cotton boxer shorts and a white ribbed cotton sleeveless A-shirt.

The gold 18″-long open-link chain necklace he wears around his neck buries the St. Jerome pendant somewhere between his undershirt and chest hair.

Tony leaves his many gold accessories, including the St. Jerome pendant, on his bedside table with pocket must-haves like loose change and a cigar cutter.

The necklace isn’t Tony’s only gold accessory. He wears a gold chain-link bracelet around his right wrist, and the gold pinky ring with its ruby and diamond stones shines from his right pinky. 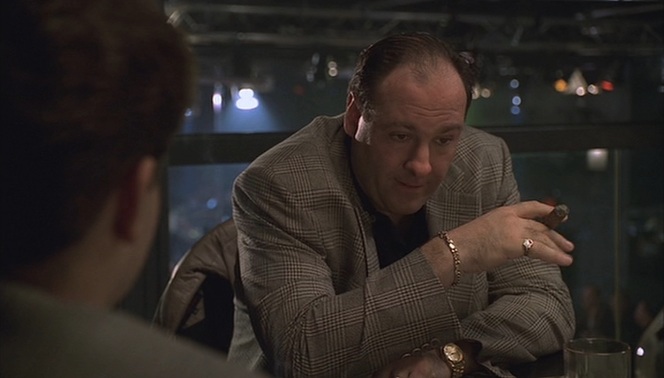 Tony flashes his gold jewelry at the strip club in “Toodle-Fucking-Oo” (Episode 2.03).

On his other hand, Tony proudly wears a gold wedding band on the third finger of his left hand. The 18-karat gold Rolex on his left wrist is also very appropriate for a mob boss as Rolex itself has designated it “the most prestigious Rolex model since 1956”. 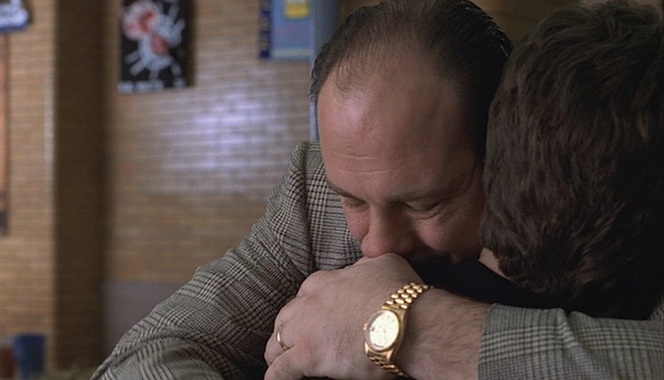 This Rolex President Day-Date 18238 has a 36mm yellow gold case with a “champagne” dial and a heavy Oyster three-piece link bracelet with a concealed clasp.

Unlike his many tracksuited pals, Tony Soprano’s wardrobe often shows the intersection of comfort, class, and versatility, well exemplified by the many combos worn with his Glen Urquhart sport coat.

For dressier occasions, Tony wears a white shirt with French cuffs. Naturally, his tie and cuff links are gold.

Is everything about everybody really about their mothers? All right, back to the other thing. For a guy like that, he’s going out with a woman he could technically not have penisary contact with her Volvo.