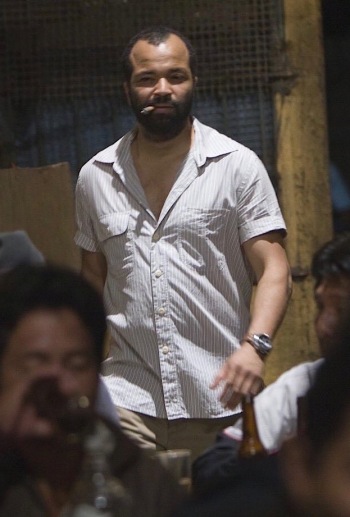 Jeffrey Wright as Felix Leiter in Quantum of Solace (2008)

The brilliant Jeffrey Wright was the first actor to reprise the mercurial role of Felix Leiter in consecutive Bond outings, appearing as the reliable if cynical CIA agent in Quantum of Solace two years after his introduction in Casino Royale. (David Hedison is the only actor to have played Felix twice: first with Roger Moore’s Bond in Live and Let Die in 1973, then reprising his role with Timothy Dalton’s Bond in 1989’s Licence to Kill.)

Ian Fleming wrote Felix Leiter to be the closest thing to a friend that James Bond would have, first described as a lanky Texan in the first literary Bond adventure Casino Royale. Leiter reappeared in the next novel, Live and Let Die, where he lost his leg in an incident that fans of the 007 cinematic universe would recollect from the events of Licence to Kill.

The role of Felix Leiter has been played by an almost comical number of actors since the character’s first appearance in Dr. No (1962), where Jack Lord provided what Bond scholars Lee Pfeiffer and Dave Worrall call “one of the most satisfying portrayals of Leiter.” Unfortunately, Lord’s demand for top co-billing and salary to reappear in Goldfinger led the EON team to recast the role, and a total of four actors would play Felix Leiter during Sean Connery’s six-film run as 007.

Following Hedison’s well-received non-consecutive appearances and one yuppie-ish take from John Terry, the role was absent during the Pierce Brosnan era but became one of the few staples of the Bond series to be revived in the Casino Royale reboot in 2006. Jeffrey Wright brought charisma, chemistry, and gravitas to the role, elevating the character into a more fully fledged persona rather than merely Bond’s “sidekick”.

For his second brief but pivotal appearance in Quantum of Solace, Felix Leiter is living the life of a deep cover spy in South America, dressed in ragged and rugged warm-weather casual wear that calls out his deftness when it comes to fitting in – as a true spy should – rather than opting for 007’s designer-influenced apparel.

Felix may well have delved into a bargain bin to find the rumpled short-sleeved summer shirt that he wears when meeting Bond for beer. His cotton shirt has a white ground with thick blue gradient stripes; each stripe is blue along each side and fades to a lighter blue center. The white space between these thick stripes is bisected by a hairline-thin rust stripe. All of the shirt’s stripes are vertical, crossing over the shoulder to form a “V” at the center of the back yoke. Below the yoke, all stripes are straight and vertical again.

Felix reconnects with an old friend over drinks… sort of.

Felix wears his shirt with the top three buttons undone on the seven-button placket. All buttons are cream plastic, but the collar buttonhole is stitched with a contrasting navy thread. The large spread collar itself rolls and folds like it’s been poorly washed a few too many times.

The set-in short sleeves are elbow-length, but Felix casually rolls each sleeve up once to form loose 1″ cuffs over his biceps. The shirt has two patch pockets on the chest, but only the right-side pocket has a flap. The wide flap closes through a single cream plastic button that matches those on the placket. The shirt has a short and slightly rounded hem with a self-gusset on the right and left sides.

As Felix spends most of this sequence bellied up to the bar, drinking generic “Cervecita” beers (ah, the pre-Heineken days of the Bond series), little is seen below his waist. He wears a baggy pair of khaki flat front trousers with straight side pockets and plain-hemmed bottoms. His shirt covers the waistband, but it’s more than likely that they are worn with a brown leather belt to coordinate with his footwear.

A brief shot of Felix strolling up to 007 at the bar shows a pair of well-worn brown leather shoes, likely the same pair of loafers with heavy black soles that he wore earlier in the film with his tan linen suit.

Felix’s wardrobe may be generic, but his watch is anything but. With both this outfit and his tan linen suit, Felix wears a Hamilton Khaki X-Wind Automatic pilot chronograph with a stainless steel 44mm case and plenty of crowns and pushers designed to help aviators make quick calculations of crosswinds.

Learn more about Felix’s Hamilton in Quantum of Solace from James Bond Lifestyle. You can also purchase the exact model of watch straight from the Hamilton site for only $1,595.

“That’s why I eat the peppers.”

While Felix’s simple casual attire is certainly the yin to Bond’s dark and sleek yang, his outfit of a striped short-sleeve summer shirt and light earth-toned trousers does recall the warm-weather attire of Sean Connery’s Bond in Thunderball (1965), sported for a summer afternoon of skeet shooting with Emilio Largo.

You can also read about the navy Tom Ford polo and Harrington jacket, dark jeans, and brown desert boots that Daniel Craig wears as James Bond in this post from November 2013. 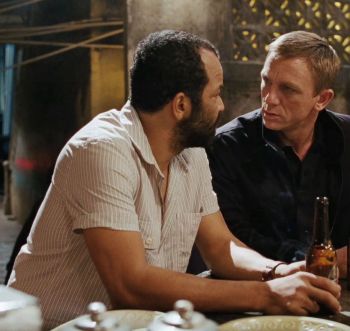 Felix Leiter dresses with comfort and authenticity in mind for his deep cover role in South America, incorporating traditional pieces of Bond’s summer style into a low-key, rumpled package.