James Gandolfini as Tony Soprano on The Sopranos (Episode 1.04: “Meadowlands”)

Happy birthday to James Gandolfini, born September 18, 1961. The celebrated late actor revolutionized television with his portrayal of troubled mob boss Tony Soprano on HBO’s The Sopranos from 1999 to 2007.

“My uncle, he’s got me in a box where I gotta do something I don’t want to do,” bemoans Tony at the outset of “Meadowlands”, the fourth episode of The Sopranos and the first without an on-screen murder. “Then there’s my mother. I pay four grand a month for this place, and she acts like I’m an eskimo pushing her out to sea.”

Tony’s problems with his family continue to grow through “Meadowlands” as his mother (Nancy Marchand) resents her placement in the Green Grove retirement community and his uncle Junior (Dominic Chianese) resents his nephew’s behind-the-scenes power plays. “Next time you come, you come heavy or not at all,” orders Junior after an especially tense meeting, causing a split in his family that not even Tony can bear.

And if only Tony’s problems ended there! The popular boss of the family, Jackie Aprile (Michael Rispoli), is laying on his deathbed, stimulating a potentially fatal power vacuum between Tony and his prickly uncle. Toss in Tony’s own hotheaded nephew Christopher (Michael Imperioli), who’s packing heat and looking to avenge a friend, and degenerate detective Vin Makazian (John Heard, in his first appearance on the show), who’s getting the wrong idea about Tony and his new therapist.

It’s almost forgivable when a raging Tony grabs a staple gun and punctures a few “overdue” holes into Junior’s lackey Mikey Palmice (Al Sapienza) and his suit. (Actually, any action taken against the obnoxious Mikey is automatically forgivable.)

From the early days of suave sociopaths Bugsy Siegel and Frank Costello through the “Dapper Don” himself, John Gotti, mobsters have always had the reputation for their distinctive fashion sense. Silk suits, spearpoint-collared shirts, and sparkling pinky rings are all conjured with the image of the archetypal “made man”.

The Sopranos tore down several Mafia myths that glamorized gangsterdom, frequently outfitting its mobbed-up goombahs in track suits. Of course, head of the family Tony Soprano typically dressed a step beyond his underlings with tailored sport jackets and suits, French cuff shirts, and well-shined Allen Edmonds on his feet. “Meadowlands”, the show’s fourth episode, featured Tony in one of his first suits that really stood out to me as a sartorial combination befitting a man of his status.

Tony’s gray semi-solid wool suit may be very appropriate in the closet of a more—let’s say—traditional businessman, but his choice to wear it with a black-on-black shirt and tie with pocket hankie to match is far more Bada Bing! than boardroom.

The ventless single-breasted jacket has notch lapels that roll to the top of the three-button front. In addition to being popular during the show’s late 1990s and early 2000s timeframe, three-button suit jackets are more flattering for a “big and tall”-sized man like the 6’1″ James Gandolfini. The three buttons on the jacket’s front and the four-button cuffs are all black buttons that coordinate well with Tony’s choice of shirt and tie as well as the black silk display kerchief that he wears in the welted breast pocket.

The suit is likely Italian in origin, though a more eagle-eyed viewer may have more luck identifying the label based on the logo sewn into the inner left of the tan satin-finished lining, best seen as Tony leans into Mikey Palmice’s car. 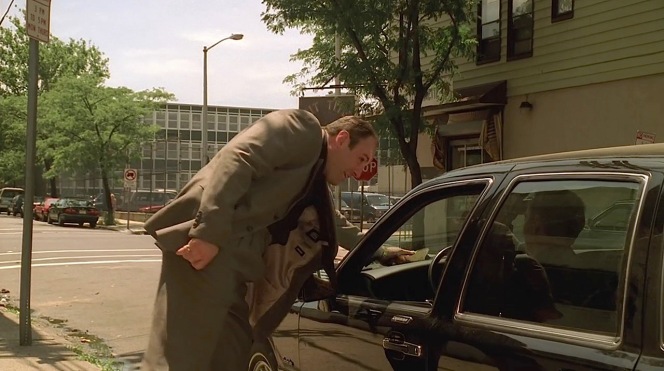 Peep the label on Tony’s suit. Any idea who made this one?

Tony’s suit trousers have single reverse pleats that begin an inch below the waistline where his belt loops remain unused in lieu of suspenders (braces) fastened to buttons sewn into the inner waistband. His trousers have straight pockets along each side seam, jetted back pockets, and are finished with cuffs (turn-ups) on the bottoms.

His suspenders coordinate nicely with his outfit, a wise move as he removes his suit jacket through his duration at the funeral home (good thing he didn’t “come heavy” for that visit!) The suspenders are black with a thick gray center stripe and a red hairline stripe on each side of that center stripe. Gunmetal clips on the front and back to hook the black leather strips into the trouser waist buttons. The adjusters are gold-toned. 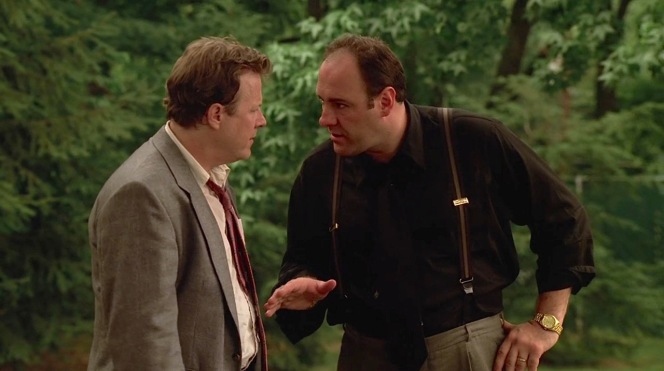 When dealing with a corrupt lawman, Tony has to lay down the law himself.

Tony wears a black silk dress shirt with a point collar, plain front, breast pocket, back side pleats, and button cuffs that he unfastens when rolling up his sleeves. The black silk tie with its subtle tonal box pattern provides little contrast against Tony’s shirt for a slick, mobbed-up look. 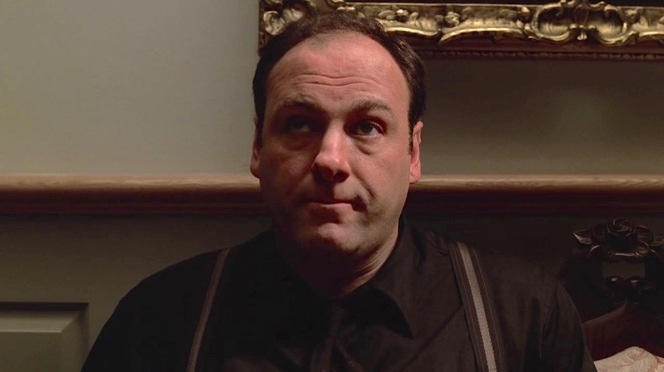 Tony endures yet another afternoon of degradation from his mother.

Tony steps out of his Suburban.

Tony establishes his habit for yellow gold jewelry early on, wearing the same chain-link bracelet and ruby-and-diamond pinky ring on his right hand as he would for the rest of the show’s run. On the opposing hand, he sports his gold wedding band and his ultimate status symbol, an 18-karat all-gold Rolex Day-Date President, ref. no. 18238. The “President” name is derived from the distinctive link bracelet that Rolex introduced exclusively for this Day-Date model. 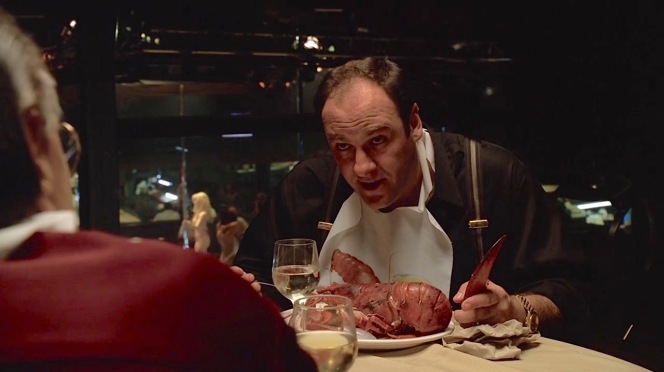 Tony none too subtly sports his Rolex President as a nod to his organizational aspirations.

We can assume he is also wearing his usual gold open-link chain necklace with a pendant of St. Jerome around his neck.

Born Pierino Como to immigrants from from the Abruzzese town of Palena, Perry Como is always a pleasant and dependable choice when looking for the soundtrack of your mobbed-up afternoon. Though not as legendary as fellow Italian-American crooners like Frank Sinatra, Dean Martin, and Tony Bennett, the well-respected “Mr. C.” remains beloved in his hometown of Canonsburg, Pennsylvania, where a statue of Perry Como plays his music 24/7.

“Meadowlands” features Perry Como’s original 1945 recording of “Prisoner of Love”, which was also used in Raging Bull (1980), when Tony drops in on Uncle Junior.

Tony and his captains go a less traditional route when chowing down on lobsters in the back room at the Bada Bing as Tipsy’s “Ugly Stadium” provides the backdrop.

If the maxim is true that one should “dress for the job you want,” Tony Soprano’s future as a mob boss should be well secured by his sartorial approach in “Meadowlands”. 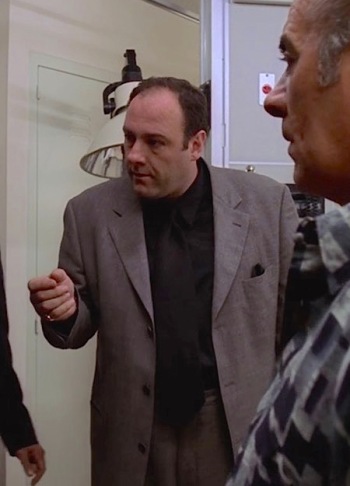 James Gandolfini as Tony Soprano on The Sopranos (Episode 1.04: “Meadowlands”)

He tries to leave, you break his other neck.