This weekend, my focus returns to NBC’s The Good Place, where Ted Danson’s architect Michael struts some of the snappiest style this side of the afterlife.

I recently researched and wrote about the classic boldly striped boating blazer for an exploration of Alain Delon’s style in Purple Noon (Plein soleil), but that’s only one type of boating blazer. Another variation is a solid-colored blazer with wide piping along the edges.

Though not quite as distinctive as a true rowing blazer, the piped blazer that Michael wears for a conversation about exploding turkey carcasses and coffee cups at the end of The Good Place‘s second episode finds itself worthy of discussion for today’s #NiceDay post.

At the end of the second episode, Michael wears a navy single-breasted blazer with white trim along the edges, including the slim notch lapels, the lower quarters, and the flaps over his hip pockets. This piping appears to be a single-width braiding that zig-zags along the edges, more understated than the staggeringly wide piping found on classic rowing blazers and slightly more consistent with certain styles of tennis blazers.

Though not technically a boating blazer or tennis blazer, this garment offers a nautically inspired aesthetic with an old school collegiate vibe. The double-vented jacket has two contrasting metal button on the front with four on each cuff. 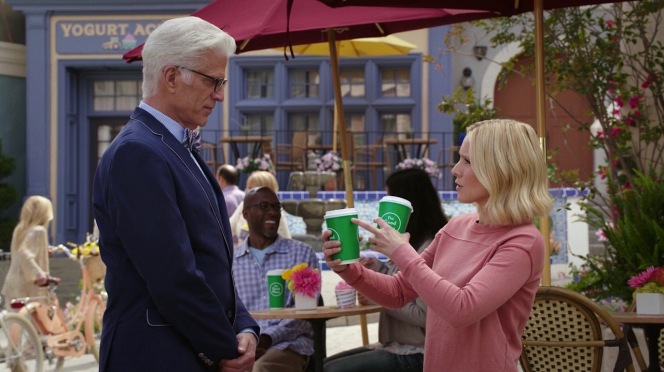 Eleanor raves about the coffee cup design of which Michael is particularly proud.

In the blazer’s welted breast pocket, Michael wears one of his many colorful silk pocket squares. This one has a wide navy edge that just barely contrasts against the slightly darker blazer. The center field of the pocket square is periwinkle with a grid of red, white, and blue dots.

Michael’s cotton shirt is bengal striped in blue and white, picking up both of the colors present on his blazer. It has a spread collar, plain front with mother-of-pearl buttons, and single-button cuffs. Michael’s butterfly/thistle-shaped bow tie is plaid, made from shades of purple, teal, gray, and black.

Michael recalls the tragic accident of the turkey carcass that led to a 1,000-year ban on flying.

Michael’s light khaki cotton gabardine slacks complement the preppy image of his nautical blazer and bow tie. These flat front trousers have side pockets, jetted back pockets, and plain-hemmed bottoms. They are likely worn with a brown leather belt to coordinate with his usual brown leather bicycle-toe derby shoes, worn here with dark socks that are likely navy-colored.

“Enjoy your coffee… and the cup!”

Michael’s eyeglasses appear to be the Oliver Peoples “Riley” frame made from black lightweight plastic with “rounded contouring, pin detailing, and a retro keyhole bridge,” as described on the OP site. 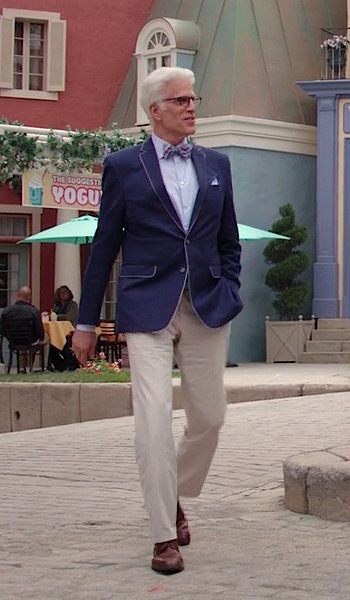 Ted Danson’s Michael on The Good Place may never leave his house (or wherever he “lives”) without a tailored jacket, bow tie, and colorful pocket square, but this combination with its rowing-inspired piped blazer, striped shirt, and plaid tri-toned bow tie would take considerable confidence.

Check out the series. The first season is currently available to stream on Netflix or to purchase on Amazon.

The second season DVD will be released next month on July 17, the day before series star Kristen Bell’s 38th birthday… and four days before my birthday!