It’s Labor Day weekend. Between now and Monday, we have to fall in love a dozen times.

Happy #MadMenMonday! Americans are celebrating their last week in the office before the long weekend over Labor Day, a holiday that provided Roger Sterling with one of his most quotable – and lecherous – of early Mad Men episodes.

Friday, September 2, 1960. Don Draper (Jon Hamm) and Roger Sterling are among a skeleton crew remaining in the office for the last full day before Labor Day weekend. After the long weekend, Roger hopes to see ideas from his team that “aims a howitzer at Kennedy’s balls” in service to their prospective new client, Republican presidential candidate Dick Nixon. In the meantime, Roger follows his true passions and propositions Joan Holloway (Christina Hendricks) for an extended liaison over the weekend.

We can go anywhere tonight! We can see a Broadway show then sit at any table in the Colony with our clothes off, if we want to.

Roger’s wide-eyed plans are quickly diffused, however, as Joan has recently seen The Apartment and is rethinking her place in line to be Sterling Cooper’s Shirley MacLaine surrogate. Paired with the bad news from Don that Dr. Scholl’s is taking its business elsewhere, the two ad men drown their sorrows in drams from Roger’s office bar before Roger leads them down to the casting area for Fred Rumsen’s double-sided aluminum commercial. A cynical yet amused Don watches as Roger plays predatory Richard Dawson to the young sets of twins who came to audition to the commercial before he “lands” on the 20-year-old sisters Eleanor and Mirabelle Ames, the latter of whom astutely notes: “Oh my… everything he says means something else, too.”

Flanking John Slattery in this production photo are Megan Stier and Alexis Stier, who portrayed Eleanor and Mirabelle Ames, respectively.

The Ames sisters soon realize exactly what is on Roger’s one-track mind, though his attempts at a second round of sex with Mirabelle leads to a heart attack that brings Don running to the rescue of his friend… and it isn’t the last time Don provides Roger with invaluable help that evening. As a delusional Roger starts calling out for Mirabelle while on the gurney, Don smacks him and reminds him that his wife’s name is Mona. The entire experience leads the cheeky ad man to a cathartic realization:

I’ve been living the last 20 years like I’ve been on shore leave.

Three-piece suits were a hallmark of Roger Sterling’s style throughout Mad Men‘s entire run, though I believe the only time this specific suit is featured is the first season episode set on the Friday before Labor Day, 1960. 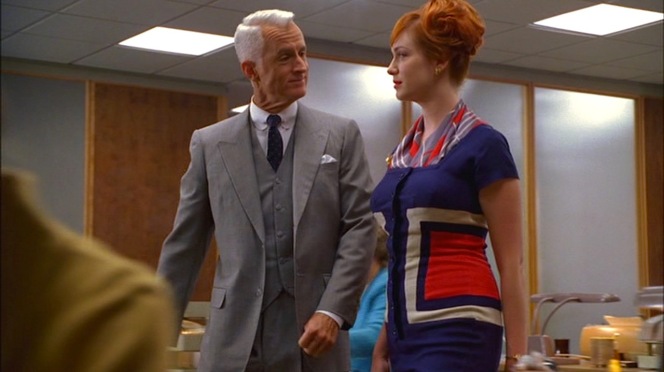 “I really need to get to the bottom of that… yes, I would like to get a look at those!”
Roger’s double entendres fail to have their desired effect on Joan Holloway, and he is forced to search elsewhere for his Labor Day weekend plans.

The suit jacket’s broad peak lapels have long gorges with pick stitching visible on the edges. The sleeveheads are roped with four buttons at the end of each sleeve, and the ventless back is somewhat flared. The jacket has straight flapped hip pockets in line with the lower button on the front, and Roger wears a white linen kerchief in the welted breast pocket.

The matching suit waistcoat (vest) has five buttons spaced apart and worn with the lowest button over the cutaway notch bottom undone. The waistcoat has four welted pockets and a gray satin-finished back lining with an adjustable cinch strap.

Roger and Don scope out the potential talent for Freddy Rumsen’s latest commercial… and their potential dates for the evening.

Roger’s trousers have a single reverse pleat on each side of the fly with side pockets, jetted back pockets, and substantial turn-ups (cuffs) on the bottoms.

Although many men opt for braces, side adjusters, or nothing to secure the trousers of a three-piece suit, Roger Sterling prefers belts no matter what. This particular belt is black leather to match his shoes with a silver-toned box buckle. It’s difficult to tell if he does so here, but – in later seasons – Roger would use his belt buckles as a vehicle for his “S” monogram.

Pillow talk with Roger and Mirabelle Ames. Note his belt, half-hanging around the top of his pleated trousers.

Roger’s cotton dress shirt is white-on-white self-striped with a breast pocket and rounded cuffs that close on one of two buttons. The club collar is pinned under the tie knot with a long silver-toned collar bar.

His navy tie is patterned with a spaced out field of small, angled white dots.

Tie firmly in place, Roger smokes his way through a meeting to discuss strategy for the Nixon campaign.

Roger’s socks get far more attention than his shoes, as he kicks off his black lace-ups in preparation for his second tryst with Mirabelle. When Don runs back into the room, however, the first thing seen by both Don and the audience are Roger’s beige dress socks with brown polka dots. Roger holds his socks in place with a pair of black sock garters that clip onto each side of both socks.

An unusual sight greets Don Draper upon his return to Roger’s office.

Like Don and many other men of his era, Roger wears all white underwear, and his romp with Mirabelle means both his undershirt and undershorts get more screen time than usual. Roger’s undershirt is sleeveless with reinforced neck and arm holes, though the cloth isn’t ribbed like the fitted A-shirts popular today.

Roger wears no rings in this episode, nor does he appear to be wearing his watch.

What to Listen To

Once the office has emptied out, Roger puts on music and goes full steam in trying to bed one – or both – of the twins, set to the tune of the McGuire Sisters’ cover of Domenigo Madugno’s “Volare”.

After Domenico Madugno released “Nel blu dipinto di blu” on February 1, 1958, the Italian ballad shot to the top of the charts on both sides of the Atlantic, spending five consecutive weeks at the top spot on the Billboard Hot 100 chart later that summer and becoming the first Grammy winner for Record of the Year and Song of the Year during the 1st Annual Grammy Awards ceremony in May 1959.

By the time Madugno’s hit made music history at the inaugural Grammy Awards, the world arguably had “Volare” fever, borrowing the Italian word for “to fly” that features prominently in the song’s chorus. Dean Martin recorded his own take on Madugno’s song in half-English, half-Italian, released in August 1958 as “Volare (Nel Blu Di Pinto Di Blu)”.

Even non-Italian artists became embracing the popularity of “Volare”. The McGuire Sisters, a trio from Middletown, Ohio, introduced their cover of Dino’s half-English version in 1958. While it didn’t have the enduring appeal of Madugno’s original canzone or Martin’s laidback cover, the McGuire Sisters’ recording still made it up to number 80 on the Billboard Hot 100… as well as into an episode of Mad Men nearly fifty years later.

Show you still mean business for the last week in the office before Labor Day by making a powerful impression à la Sterling Cooper’s witty and womanizing head of account services, Roger Sterling.

Whether you have the right suit or not, you can always outfit yourself with some of Roger Sterling’s favorite accessories, such as a navy polka-dot tie from The Tie Bar, beige polka-dot socks, and an old-fashioned set of sock garters.

Check out the whole series… but start with the first season, of course.