Almost five years after the success of his World War I epic Hell’s Angels, Howard Hughes lands his seaplane at the beach to the tune of Bing Crosby crooning the 1933 ballad “Thanks”, backed by “musical host of the coast” Jimmie Grier and his Orchestra. The graceful approach of the Sikorsky S-38 “Flying Boat” and the dapper Hughes deplaning from it dazzles the cast and crew of Sylvia Scarlett, Katharine Hepburn’s first of four films with director George Cukor and co-star Cary Grant.

“I read in the magazines that you play golf,” Hughes introduces himself to Hepburn (Cate Blanchett, who won the Academy Award for Best Supporting Actress for her portrayal). “On occasion,” she responds. “Well, how about nine holes?” he asks.

“If it would be convenient, Miss Hepburn.” 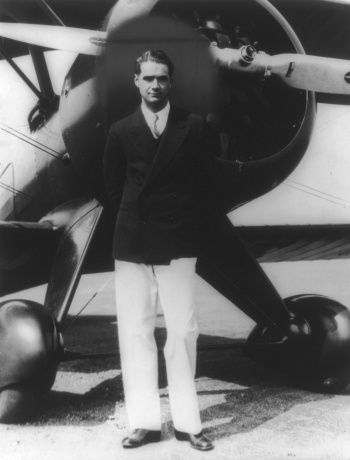 The real Howard Hughes, dressed similarly to DiCaprio’s depiction, standing in front of his new Boeing 100A Army Pursuit Plane in Inglewood, California, during the 1940s.

DiCaprio’s Hughes emerges from his Sikorsky seaplane in a navy double-breasted jacket and off-white trousers, a classically sophisticated seaside ensemble that balances the traditional navy reefer jacket with a summery white lower half, an increasing popular sartorial marriage among well-to-do American men during the interwar period.

Sandy Powell, whose work in The Aviator was deservedly honored with the Academy Award for Best Costume Design, was undoubtedly inspired by an outfit favored by the real Howard Hughes as seen in several photos from the early 1940s. Its elegance here no doubt contributed to elevate this brief and ultimately insignificant vignette into a memorable image from the film.

DiCaprio’s double-breasted jacket is likely navy serge, a heavy, mill-weave worsted twill cloth. The wide peak lapels have straight gorges, sweeping across his torso for a six-on-two button formation, closing with dark blue plastic sew-through buttons that lack the flashy contrast of a metal-buttoned blazer. The jacket has a welted breast pocket, straight flapped hip pockets, and a ventless back per the prevailing vent preferences of the era. (The one detail of his jacket that remains indiscernible to me is whether or not his cuffs are finished with three or four buttons.)

Hughes wears a businesslike white cotton shirt with a long point collar in a sharp inverted “V” shape that perfectly exemplifies this style of collar. His repp striped tie is primarily red with wide coral-colored block stripes, bordered along the top with thin periwinkle, white, and navy stripes all in the right-down-to-left traditionally American “downhill” direction.

Powell’s vision for the scene takes it to the next level of contemporary cool by dressing Hughes in a pair of vintage-inspired gold-framed sunglasses that he continues to wear when golfing with Miss Hepburn. While sunglasses were still finding a foothold among stylish men and women during this pre-war period, an aviator like Hughes would have certainly been familiar with their virtues—particularly when flying through the sunny skies over southern California—and would have been fashionably ahead of the curve. The rounded dark gray lenses recall the retro-inspired Ray-Ban RB3447 “Round Metal” sunglasses, available online from Ray-Ban and from Amazon.

Sophisticated style for a seaside summer at sunset. (Say that ten times fast.)

“It is difficult in a white suit to have the air of nonchalance that I think real good dressing requires,” the esteemed Sir Hardy Amies scribed in his 1964 volume ABCs of Men’s Fashion. “We are therefore today rather inclined to abandon the white linen jacket and merely retain the white linen trousers. There is nothing more comfortable to wear or more pleasant to see than these.”

Evidently, Hughes got the memo with the cream-colored linen trousers completing his look as he strides from his Sikorsky with considerably more nonchalance than one would evidently expect from a gent fully suited in white. These flat front trousers have an appropriate long rise to DiCaprio’s waist and are finished on the bottoms with turn-ups (cuffs).

As Hughes emerges from the cockpit, we get a quick glimpse of his waistband before he buttons the jacket and see that his trousers appear to be worn with a slim leather belt, almost certainly a dark brown leather to coordinate with his dark brown cap-toe oxfords. With outfits like this, almost any shade of shoe leather is preferable to black, which would provide an unseasonal and unattractive contrast with the near-white of his trousers. Hughes’ dark socks appear to also be a thematically appropriate brown.

The fifth chapter describes Gatsby’s “white flannel suit, silver shirt, and gold-colored tie” for his reunion with his lost love, Daisy Buchanan, a direction that was unwaveringly followed by the costume designers who dressed Robert Redford in 1974, Toby Stephens in 2000, and DiCaprio himself in 2013. However, Edith Head went a more practical route than Fitz prescribed for Ladd’s Gatsby, dressing him in a dark navy double-breasted blazer, white shirt, striped tie, and white flannel slacks.

Ladd’s Gatsby takes a moment of solitude in his navy blazer and white trousers. His affectations of pocket square and spectator shoes would have been uncharacteristic for DiCaprio’s Hughes but fine additions to this particular outfit.

Aside from Ladd’s spectator shoes, it’s nearly identical to how Sandy Powell would dress DiCaprio for Hughes’ majestic arrival by seaplane on a southern California beach. Powell’s costume design for the scene was almost certainly inspired by an actual outfit worn by the real Hughes (as mentioned and illustrated above), but I found the Gatsby similarities interesting given that DiCaprio would eventually play the famous romantic of the roaring ’20s himself. 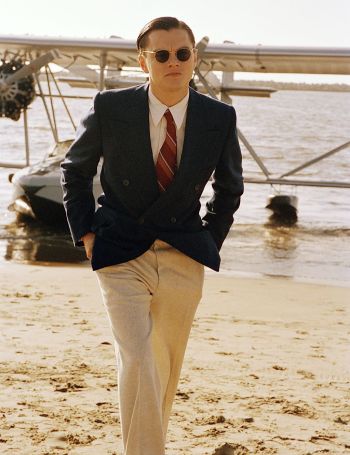 “With blue and white as the imperatives of nautical dress, navy blazers and white trousers made a dashing sports outfit for the wealthy American man of the 1920s,” writes Alan Flusser in Dressing the Man.

If anyone embodied American wealth during the interwar era, it was Howard Hughes, and Leonardo DiCaprio’s portrayal channels the real-life aviator’s fashion sense as he stylishly deplanes in a navy double-breasted jacket and off-white slacks, completing his suave look with striped tie and retro-inspired sunglasses for good measure.