100 years ago today, on December 12, 1915, two Italian immigrants welcomed the birth of their son, Francis Albert Sinatra, in a Hoboken tenement. A century later, their legendary blue-eyed son has left an indelible legacy on our culture that can never be replicated. Sinatra’s style, stubbornness, and swagger complemented his natural skill and hard work to make him a living icon and one of the greatest singers of the 20th century.

After enjoying a decade of early success singing with the Harry James and Tommy Dorsey orchestras before his personal appeal allowed him to sign with Columbia as a solo artist, Sinatra’s popularity began to decline. The death of his publicist George Evans, his tumultuous public affair with Ava Gardner, and his own throat issues nearly meant the end of Sinatra’s career by the early 1950s.

Sinatra persevered. His records weren’t selling, and he was singing to county fairs in Hawaii, but he wasn’t going to give up that easily. His Oscar-winning role in From Here to Eternity (shades of The Godfather!) signified the start of a unprecedentedly booming career revival. 1953 also saw Sinatra signing his seven-year contract with Capitol Records that would produce his groundbreaking “concept albums” and – in my opinion – some of the greatest music ever recorded. Despite his perfectionist tendencies, even Sinatra couldn’t help but to agree. After hearing he and arranger Nelson Riddle’s first cut of “I’ve Got the World on a String”, Sinatra couldn’t help but to exclaim:

For Sinatra’s birthday, it only makes sense to explore a look best associated with him: a dark tuxedo and – of course – a drink in his hand. In 1956’s High Society, a musical remake of The Philadelphia Story that also starred Bing Crosby and Grace Kelly, Sinatra plays cheeky tabloid reporter Mike Connor assigned to cover a socialite’s wedding.

Mike wears a midnight blue dinner jacket for a reception the evening before the nuptials. The single-breasted dinner jacket has a full 1950s cut with soft, widely extended shoulders, drape in the chest, and a suppressed waist. Although Sinatra had a famously slender frame, the large cut of the jacket is still tailored to look both flattering and fashionable.

According to Black Tie Guide, Mike’s look is quintessential for the era:

Formalwear worsted became lighter during the decade eventually weighing in at ten ounces to the yard. The visual manifestation of this slightly relaxed formality was a preference for the slimming single-breasted jacket with streamlined shawl collar and understated cummerbund. Add to this a turndown collar shirt and narrow bat wing tie and the result was the quintessential fifties tuxedo. 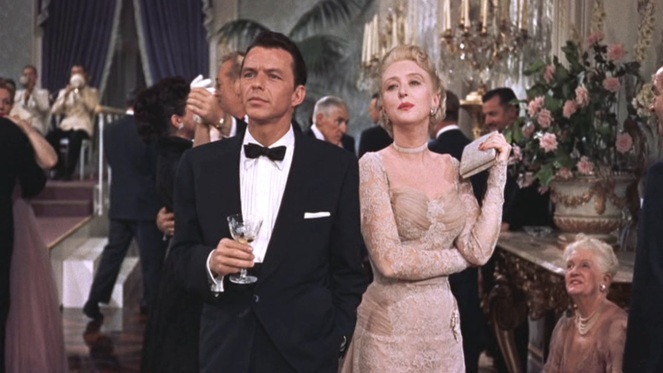 A few details of Mike’s midnight blue dinner jacket signify that it isn’t quite as formal as others, a reflection of the relaxed formality that permeated American menswear during the postwar years. The single button in the front and 3-button cuffs all appear to be plastic rather than covered in satin or silk. The shawl lapels are also self-faced rather than silk-faced.

The jacket has jetted hip pockets and a welted breast pocket, where Mike wears a white folded pocket square. The back is ventless

Mike’s pleated formal trousers are likely made from the same lightweight midnight blue worsted cloth as his dinner jacket. There is a wide satin stripe down the side of each leg, with the side pocket cut straight just behind the stripe. The trousers are fully cut, like the jacket, with a slight taper at the plain-hemmed bottom of each leg. 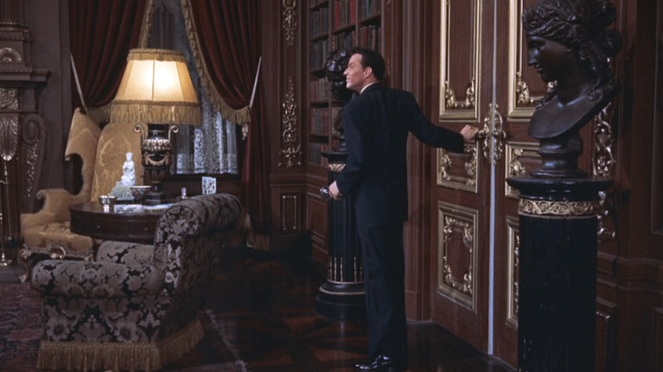 Mike wears a white pleated-front formal shirt with mother-of-pearl buttons on the front placket. The shirt has a large turndown point collar and double cuffs, through which he wears a pair of gold rectangle links.

As Frank pours Bing’s champagne (clearly showing who was still who in the hierarchy of the 1950s entertainment world), we also see Bing wears a more formal dinner jacket with satin-faced lapels.

Not much is seen of Mike’s wristwatch, but it appears to be a gold tank watch on a black leather strap. Despite the wealth of information out there about Sinatra’s personal style, it’s hard to find information about his preference for timepieces. 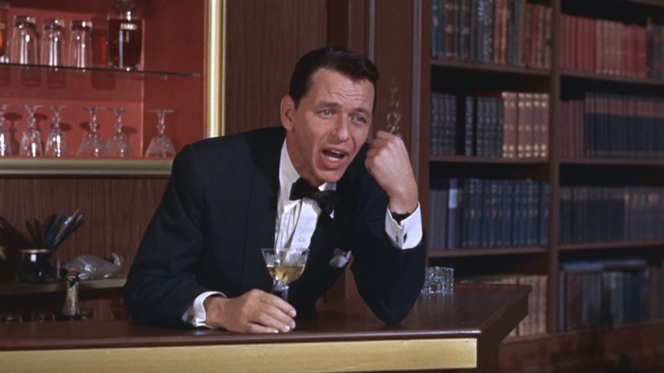 Singing with a drink in hand: Frank, as he’d want to be remembered.

In The Way You Wear Your Hat: Frank Sinatra and the Lost Art of Livin’, author Bill Zehme includes Sinatra’s personal credo when it comes to black tie:

For me, a tuxedo is a way of life. When an invitation says black tie optional, it is always safer to wear black tie. My basic rules are to have shirt cuffs extended half an inch from the jacket sleeve. Trousers should break just above the shoe. Try not to sit down because it wrinkles the pants. If you have to sit, don’t cross your legs. Pocket handkerchiefs are optional, but I always wear one, usually orange, since orange is my favorite color. Shine your mary janes on the underside of a couch cushion.

There’s no denying that Frank Sinatra and the rest of his Rat Pack cronies are legendary for their drinking habits. In High Society, we see Frank treating himself and Bing to a few – well, more than a few – glasses of champagne, but the real Frank’s preference was definitely whiskey. 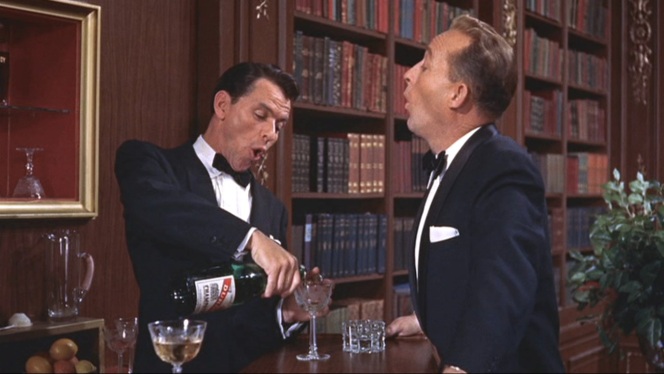 Frank tops off a few glasses for Bing and himself.

… and not just any whiskey. Jack Daniel’s was Sinatra’s elixir of choice, and there was a science to mixing his favorite concoction. Zehme gives us the recipe: 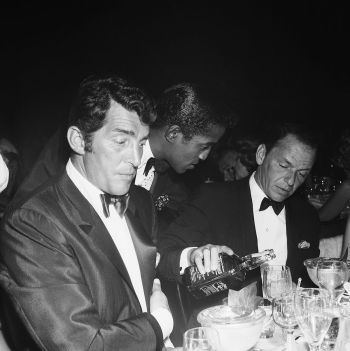 Most surprisingly, Frank would always say: “I don’t like the taste if it’s too strong.” And why should he? A guy like Sinatra could drink all night (and all day), so he may as well enjoy what he’s drinking and be able to keep himself ready to sing – or throw down – at a moment’s notice.

Ice was also a touchy subject for Frank. It had to be just right – not too little and not too much. Zehme tells a story of Sinatra sitting down at the Boston Four Seasons Hotel bar where a bartender served him a glass of Jack Daniel’s filled with ice. Without a word – but with a dose of passive aggression – Sinatra began “plunking” ice cubes onto the bar. When the bartender asked if there was a problem, Frank retorted: “No, but with all this ice, I figure we’re supposed to go skating here or something. That’s not my sport.” And with that, Frank left himself four ice cubes and was able to enjoy his drink.

Zehme even notes his favorite type of glass: “a traditional squat old-fashioned, or rocks, glass”, often with a leaded base that could be elegantly held from below with a linen cocktail napkin in his right hand.

With all that work, it would certainly be a cautious honor to be able to pour Sinatra a drink. Even the man himself was reluctant to do so, groaning “Yeeesh, that’s a brown mother I made!” if he poured incorrectly.

Frank also enjoyed a far simpler voice; even after his throat hemorrhage that nearly ended his career in the early 1950s, his Camel unfiltered cigarettes became a trademark. If he wasn’t drinking or eating, he was smoking; he even attributed his venerable vocal talents to the constant stream of tobacco smoke and whiskey that were coating his throat on a daily basis. After Sinatra died on May 14, 1998, he was buried with his two most reliable companions – a bottle of Jack Daniel’s and a pack of Camel cigarettes – tucked into his suit.

If Frank Sinatra could be honored in any way, I’m sure he would appreciate knowing the generations of men who have been inspired by his style. So pour yourself a Jack Daniel’s over ice, fasten those cuff links, and step out on the town with a beautiful woman on your arm. Just make sure you look the part: 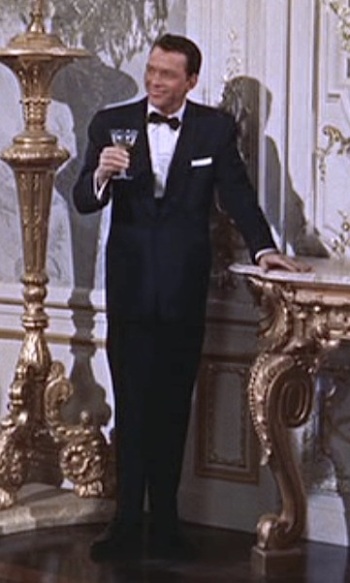 In High Society, Frank neatly folds a white handkerchief into his jacket breast pocket. In real life, Sinatra would often be seen sporting a red or orange pocket square with his formalwear.

, and – of course – pay tribute to the Chairman of the Board by letting the crooner provide your soundtrack today. While any of his Christmas classics may seem right this time of year, the recently released A Voice On Air (1935-1955)

would also make a great stocking stuffer either for you or a loved one who appreciates classic style.

Fans of the man’s style should also look for a copy of Bill Zehme’s The Way You Wear Your Hat: Frank Sinatra and the Lost Art of Livin’

; I was very lucky to have received mine from Teeritz last year, and it’s become a constant reference for all things Frank.

Do yourself one more favor and pour out a birthday toast for Frank.

You know how I feel about my grandmother but I’d sell her for a drink.