Don Draper has always turned to the escapism of the movies in times of crisis or loneliness, most notably (and humorously) in “The Good News” (Episode 4.03) when drunkenly accompanying Lane Pryce to a screening of Gamera: The Giant Monster in during the men’s lonely week between Christmas and New Year’s Eve.

Two seasons later, Don is slightly less lonely with his new wife Megan (and his new upstairs mistress, Sylvia) but still frequents the movies whenever he can. “The Quality of Mercy” finds Don and Megan seeing Rosemary’s Baby when they run into Ted and Peggy, claiming to be on a client research mission.

This outfit was called out by AGENT as one of the 10 Outfits Encapsulating the Appeal of Don Draper Style, described as “a black cashmere turtleneck that complements his dark green plaid sports coat perfectly.”

Don’s single-breasted sport jacket is dark olive wool with a large-scaled blue, taupe, and black Glen Urquhart check. The lapels are slim with small “fish mouth”-shaped notches and some degree of edge swelling, rolling to the top of the two-button front. The short double vents complement the shorter fit of the jacket, a trend from the late ’60s that has cycled back into fashion fifty years later, and the jetted hip pockets slant gently toward the back. 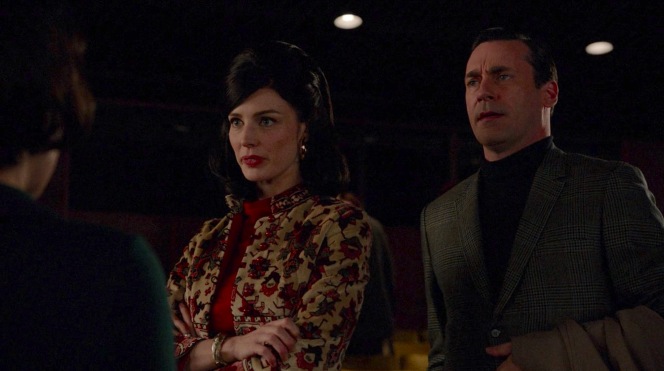 Megan and Don are surprised to run into fellow moviegoers Peggy and Ted.

Amanda Marcotte noted the eerie similarities between Don’s outfit and something similar sported by John Cassavetes in Rosemary’s Baby, the very movie that he and Megan went to see. Tom and Lorenzo took it a step further on their excellent, style-focused Mad Men blog, spotting the possibility that Don’s outfit has been influenced by Ted’s modern style: “Don was mimicking Ted so clearly, right down to the turtleneck and plaid jacket. That’s a signature Ted Chaough look and Don is standing there, wearing it in dark grey and black, like a figure of judgment against him.” Perhaps subconsciously ashamed for being seen by Ted while mimicking his look, Don sadly doesn’t wear this cool plaid sport jacket again.

Don has a habit of wearing checked sport coats to the movies. In “The Flood” (Episode 6.05), Don wears a houndsooth jacket with a yellow button-down summer shirt when he takes his son Bobby to see Planet of the Apes. Seven episodes later, during this cool late October afternoon that finds Don with Megan at the movies, he layers more warmly with a black cashmere turtleneck sweater under his plaid jacket. 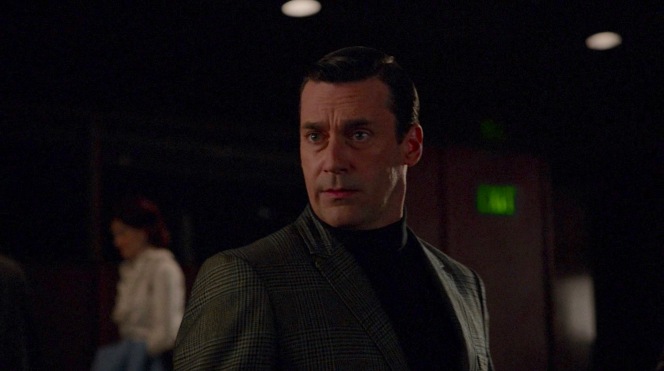 Even with the then-fashionable short fit of the jacket, not much is seen of Don’s sandy brown flat front trousers beyond the straight leg and plain-hemmed bottoms. These may be the same trousers he wore when lounging around his apartment in a wrinkled white dress shirt in “A Tale of Two Cities” (Episode 6.10). Less is seen of his dark belt, shoes, and socks, but they are all likely black. His leather shoes appear to have closed lacing on the front and are probably black oxfords.

Especially with his raincoat on, Don’s look also evokes Steve McQueen in Bullitt, also released in 1968 and thus very contemporary to this particular episode. Like McQueen, Don wears a knee-length khaki balmacaan-style raincoat with a long single vent. It has raglan sleeves and a fly front. Assuming it’s the same raincoat he wears earlier in the season (and there’s no reason it shouldn’t be), it has five tan buttons, slanted hand pockets, and plain cuffs. 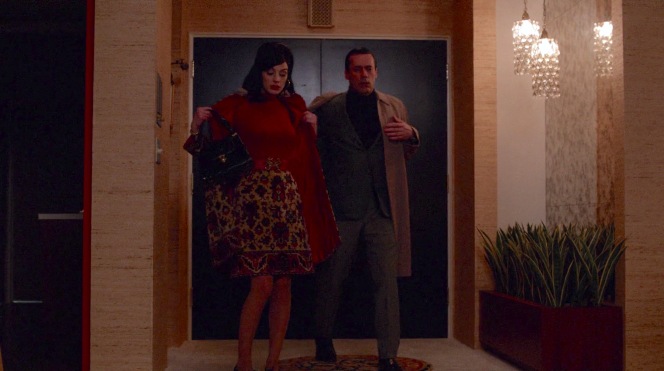 Megan makes it clear to Don that she would never want to live in a creepy old apartment building as they stroll into their modern, million-dollar penthouse apartment.

Don spends much of the scene with his raincoat draped over his left arm, concealing his wrist and thus making it unclear if he’s wearing his classic stainless Omega Seamaster De Ville wristwatch. 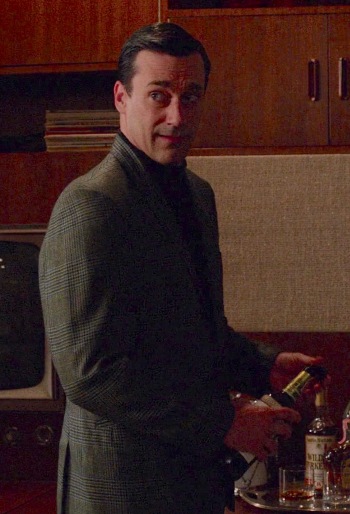 Dehydrated after an afternoon of salty popcorn, Don Draper (Jon Hamm) turns to his trusty old Canadian Club upon returning home in “The Quality of Mercy” (Mad Men, Episode 6.12).

Don Draper makes the most of his afternoon date to the movies by channeling both an on-screen character and an erstwhile rival he encounters at the cinema.

Check out the sixth season… and definitely watch Rosemary’s Baby!

Honestly, I’m more troubled by the idea of using Rosemary’s Baby for a children’s aspirin ad.

And while we’re on the subject of Rosemary’s Baby, Mia Farrow tweeted this image in February to announce the upcoming birth of her granddaughter 🙂

My brilliant daughter made this to announce she is expecting their first baby. I’m so excited!! pic.twitter.com/9gWVwSOM9t