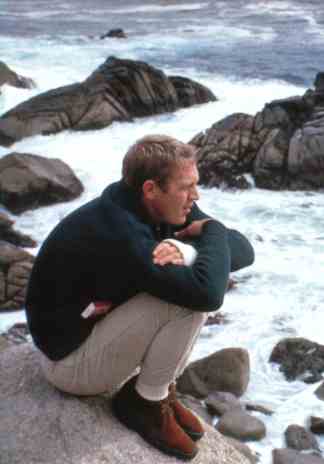 Happy birthday to Steve McQueen, born March 24, 1930, in Beach Grove, Indiana, then a small town of barely more than 3,500 people. By the age of eight, he had already received his first bike (well, a tricycle) and his first watch (a gold pocket watch from his uncle), two items that would become very important to his life and legacy. By the time McQueen died of cardiac arrest in November 1980, the “King of Cool” had cemented a place among the greatest American icons of screen and style through his performances in films like The Great Escape, Bullitt, and The Thomas Crown Affair, and his lifelong passion for racing and rebellion.

Steve McQueen was the type who strove for living like a legend, perhaps all too aware that he had to make the most of a life that would be shorter than most.

Neile and Steve share a picnic at Carmel with Peggy and Clax. Note the cast on Steve’s wrist and his Ferrari parked in front of Clax’s Porsche behind them.
(Photograph by William Claxton, 1964)

“He was street-smart, animal-like, non-intellectual, and hip,” notes William Claxton, a renowned photographer who had been one of McQueen’s closest and most trusted friends through the early years of the sixties. “In fact, he brought new meaning to word hip: he was super-hip.”

Only a photo shoot so iconic could warrant diverging from BAMF Style’s usual movie or TV-centric posts, and Steve provided “Clax” with just that opportunity one day in the fall of 1964.

“After Steve finished The Cincinnati Kid, he and Neile asked Peggy and me if we would like to take a motoring trip with them,” recalls Claxton. “Neile had just given Steve a new Ferrari (’63 250 GT Lusso Berlinetta) and I had just bought a Porsche 356 SC. We went up the California coast on Highway 1, into San Francisco, over to Reno and Lake Tahoe, then down into Death Valley, and back to Los Angeles. It was a leisurely trip in spite of the times that Steve would pass my little Porsche at about 130 mph.”

Part of the “leisurely” trip included a stop in Carmel-by-the-Sea for a picnic where the two couples – McQueen and Neile Adams and Claxton and his wife Peggy Moffitt – enjoyed wine, weed, and wonderful views. In his years of acquaintanceship with the actor, Claxton had become accustomed to bringing along his “ax”, a fortuitous decision in this case as he captured some of the most iconic and enduring photos of Steve McQueen to date.

Steve McQueen’s much celebrated shawl-collar cardigan may have remained a phenomenon of a half-century ago had it not re-emerged in its own somewhat unlikely style renaissance thanks in part to McQueen’s spiritual successor-in-style, Daniel Craig.

I’ve explored some of McQueen’s on-screen cardigans before – the brown sweater in The Cincinnati Kid and a maroon one in Bullitt – but it was the navy cardigan he had donned in real life for this “motoring trip” up the California coast that remains the most famous and envied by McQueen fans. 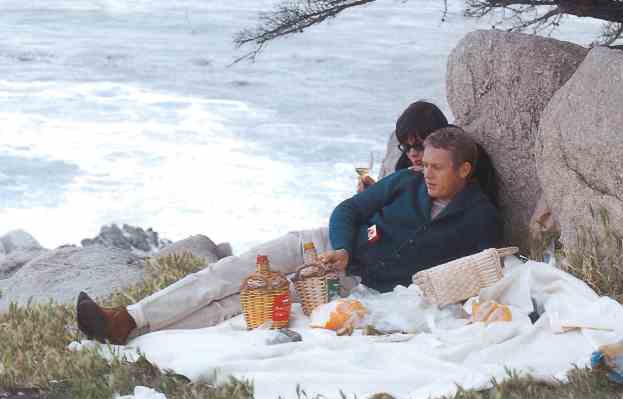 Steve McQueen and his wife Neile Adams in respite.
(Photograph by William Claxton, 1964)

McQueen’s navy cardigan is constructed in a tight shaker stitch with a ribbed knit shawl collar, likely in lambswool or cashmere. The set-in sleeves also have ribbed knitting at the cuffs, which McQueen folds up once over each wrist.

The cardigan has six brown woven leather buttons up the front with an additional button under the right side of the shawl collar that closes up the chest, if needed. There is a straight-opening patch pocket on each hip.

You can try to track down a McQueen-style cardigan on your own, but Iconic Alternatives has already done the work for you! Check out the great finds that Iconic Alternatives has listed, but pay special attention to the BERK McQueen 4 Ply, made from 100% pure cashmere and inspired by the actor right down to the detail of the distant upper button for a warmer wear. (As of March 2018, this cardigan carries the hefty asking price of £850… but it’s nice to know that it’s out there.)

An affordable option is also Mango’s cotton chunky knit cardigan in indigo blue which, as of June 2019, is offered at the jaw-droppingly low price of only $34.99.

Steve’s undershirt is a much simpler affair. After a motorcycle accident left him with a broken wrist, McQueen evidently forewent fussing with a more elaborate shirt and instead pulled over a white cotton short-sleeve crew-neck t-shirt for the road trip. 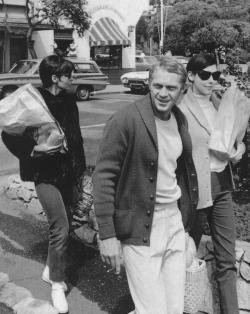 McQueen, flanked by his wife Neile and Clax’s wife Peggy, during a Carmel shopping trip.
(Photograph by William Claxton, 1964)

Despite the horological associations of McQueen with his Rolex Submariner and Heuer Monaco timepieces, the actor appears to not be wearing a watch for this jaunt up the coast with Clax, giving a new – or perhaps very literal – meaning to the word timeless.

McQueen wears a pair of cream-colored cotton trousers likely made from Bedford cord, a tough, durable woven fabric with ridges in the weave that resemble a thin-waled corduroy.

When he wears the cardigan open while shopping in Carmel (see right), the flat front trousers have the same fit and styling as a pair of chinos, including the extended front waist tab with a hook closure.

Other shots of McQueen relaxing on the cliffs at Carmel give us a clearer look at his pants with their swelled seams along the sides and bottoms and the patch pockets on the back. 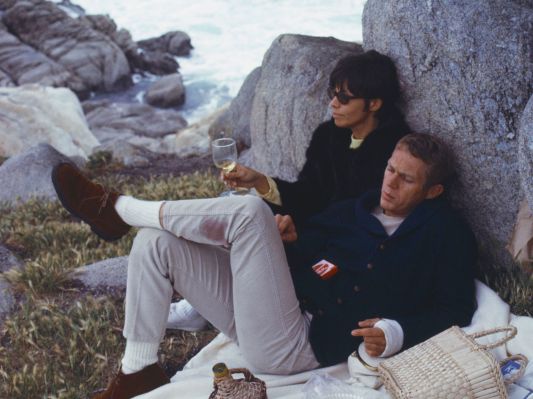 McQueen kicks back with Neile at Carmel. Note the wine-stain on his pants, and imagine just how carefree the couple felt in that moment.
(Photograph by William Claxton, 1964)

Ah, the boots… what would any discussion of Steve McQueen’s style be without inclusion of his boots?

First – the facts. McQueen appears to be wearing here a pair of “playboy boots” in chocolate brown suede, a darker shade than the snuff-colored boots that Bullitt made famous, worn with a pair of white ribbed cotton tube socks. The boots have two-eyelet open lacing with brown laces and charcoal crepe “bumper” soles, an essential – and comfortable – element that distinguishes playboy boots from other suede ankle-high footwear.

Let’s begin by addressing the first question; Steve McQueen wore Hutton Original Playboy boots, both in real life and in many of his films. Hutton patented the distinctive crepe bumper sole in 1936, holding exclusive rights to it for four decades until it was forced to sell the patent in the 1970s. Considering that McQueen is seen here wearing his playboy boots in the mid-sixties – and they can even be spotted on his feet in 1958’s The Blob – we must deduce that his famous boots were made by Hutton of Northampton.

Seems simple enough. If you want a pair for yourself, you’d just go to Hutton, right? Not so fast… Hutton was forced to close its doors in the decades following the sale of its patent. In that time, numerous companies jumped on the playboy boots bandwagon, including the aptly named Playboy Footwear brand and the English heritage shoemaker Sanders & Sanders. The latter was one of many companies who carried on the tradition of producing desert boots after Hutton folded, and McQueen’s spiritual successor Daniel Craig even sported a pair of Sanders & Sanders hi-top chukka boots (in the playboy style if not name) in his most recent 007 adventure, Spectre.

To learn a little more about the Craig-McQueen boot connection or find affordable pairs of alternatives, check out what Iconic Alternatives has to say. You can also learn a thing or two from Steve McQueen Style’s most recent relevant post on the matter here.

The Hutton brand was recently revived in 2016, offering high-quality desert boots in very limited quantities to echo the footwear’s 1960s heyday, though it appears to stick to traditional desert boots rather than the McQueen-esque playboy boots that the original company remains famous for. 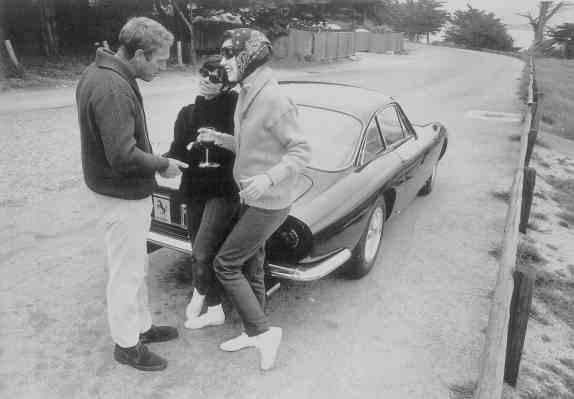 What’s a road trip without refreshments? Peggy Moffitt enjoys a glass of wine while chatting with Steve and Neile. Note the actor’s snazzy Ferrari.
(Photograph by William Claxton, 1964)

In a way, the California road trip was a fitting swan song for the McQueen-Claxton association. Claxton states in the foreword of his book that, “after making The Cincinnati Kid, Steve went to Hong Kong to work on The Sand Pebbles,a nd Peggy and I went off to Europe to work on our own careers. In the passing years, Steve and I rarely spoke. We both had moved on with our lives.

In those few short years that I worked and played with Steve, we had a lot of fun, and I feel that I’m a very fortunate man for having known Steve McQueen, who was an American original.”

Steve McQueen remains emblematic of the “live fast, die young” ethos exemplified by his spiritual predecessor James Dean, and enduring interest in the “King of Cool” and his sense of style remains a timeless testament to his essential role in the study of menswear.

While it’s certainly possible to get your hands on these specific items and emulate McQueen, perhaps you’d be best served to follow his example of insouciance, blending his favorite garments regardless of their formality to create a comfortable, casual, and ultimately classic ensemble forever associated with him.

For more about Steve McQueen’s personal style, including the cardigan and boots featured here, check out my 2017 article for Primer here.

As mentioned throughout the post, Iconic Alternatives has also done a fantastic job mining the Internet and its various clothiers for affordable options similar to the cardigan and boots. 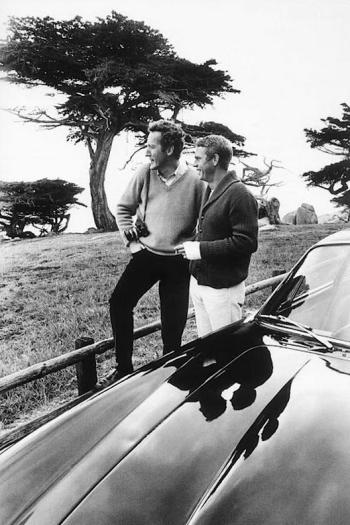 Check out William Claxton’s Steve McQueen, a delightful tome of Clax’s masterful photographs that capture not only an American icon at work and play but also the zeitgeist of an era that allowed such a man to flourish.

For McQueen fans, I cannot recommend it enough, but I’ll let McQueen’s biggest fan do the talking…

“It’s obvious that Dad trusted William Claxton very much,” wrote Chad McQueen in the afterword to Clax’s photographic tribute to his father. “‘Clax,’ as Dad called him has told me that he was constantly fascinated with his tough guy, often secretive and daredevil qualities; but most of all he admired his cool and hip personality. Clax and Dad both loved fast cars and took many trips together. Their relationship was unique and trusting. Otherwise, these moments could not have been recorded on film for all of us to enjoy. This book captures his friend, my Dad, in close-up.”

I like to push it as far as it will go. It keeps me on the edge. It’s sort of a challenge. That feeling that I almost can’t make it, but then I do. Know what I mean? I think it helps my concentration.