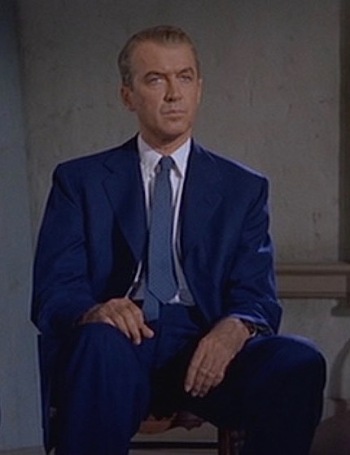 Today is the 60th anniversary of the release of Vertigo, Hitchcock’s noir-esque thriller and the last of his collaborations with James Stewart. Hitch blamed Jim for the film’s lack of success at the box office, but history would give Jim the last laugh as a 2012 reevaluation for BFI’s Sight & Sound led to a poll of critics choosing Vertigo as the greatest film of all time, beating out long-standing #1 choice Citizen Kane.

As former San Francisco detective John “Scottie” Ferguson in Vertigo, James Stewart wears a rotating selection of business suits in shades of blue, gray, and brown. The suits are all generally cut the same – single-breasted, three-button jackets with notch lapels and pleated trousers with turn-ups – with variations in the suiting and style: three are flannel while two are serge, three have ventless jackets while the other two have short vents, and two of the suits have sporty patch pocket jackets as well.

With the exception of the somber death inquest, this bold royal blue serge suit serves as Scottie’s go-to “going out” suit for evenings at Ernie’s, whether he’s on a date or just drinking stag.

The single-breasted suit jacket has substantial notch lapels that roll to a three-button front. The shoulders are wide, balancing James Stewart’s lean physique, with a then-fashionable ventless back and three buttons at the end of the sleeves. This and the gray flannel suit he wears when rescuing Madeleine (Kim Novak) from the Fort Point bay are Scottie’s two suits with patch pockets on the jackets. 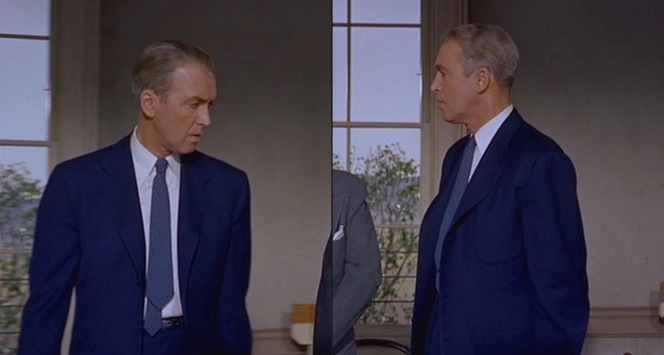 Three-button jackets are typically recommended for taller men, providing the perfect balance for a taller man like the 6’3″ James Stewart.

Pleated pants were back on the rise during the 1950s, and Scottie’s suit is no exception… and, speaking of rise, these trousers have a long rise that may be considered high by today’s standards but is perfectly proportional with the suit and Jimmy Stewart’s height, as the trouser waistband meets the jacket’s middle button right at the buttoning point.

Scottie wears his trousers with a slim textured belt that appears to be dark navy leather, even though traditional black leather would be more consistent with the character. The belt has a long, thin steel single-prong buckle.

Under the wide turn-ups (cuffs) on the bottom of his trousers legs, Scottie also appears to be wearing his usual cordovan wingtip oxford brogues with a pair of dark navy socks. 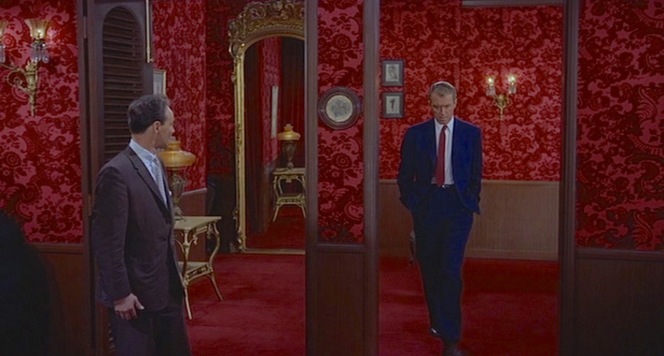 Scottie strides into Ernie’s yet again.

Despite his colorful suits, sport jackets, and sweaters, Scottie never diverges from his usual white cotton poplin dress shirts with two-button rounded cuffs, though there is some variance as to his choice to wear a collar bar.

Up to the point of Madeleine’s death (I warned you about spoilers!), he always wears a collar bar with his shirts and ties. For this suit’s first major appearance, at the inquest following her death, he begins wearing his shirts without collar bars. It’s a subtle difference, but it must be a meaningful one as he again resumes his practice of wearing a collar bar in his shirt after making Judy’s acquaintance and growing obsessed with turning her into Madeleine.

At Madeleine’s death inquest, Scottie maintains a generally monochromatic look with a tie that appears to be blue cross-checks on a lighter cornflower blue ground. Perhaps symbolic of his distracted state of mind, he foregoes his usual collar bar and wears the tie’s tail slightly longer than the blade… a custom that has been co-opted by modern practitioners of sprezzatura. 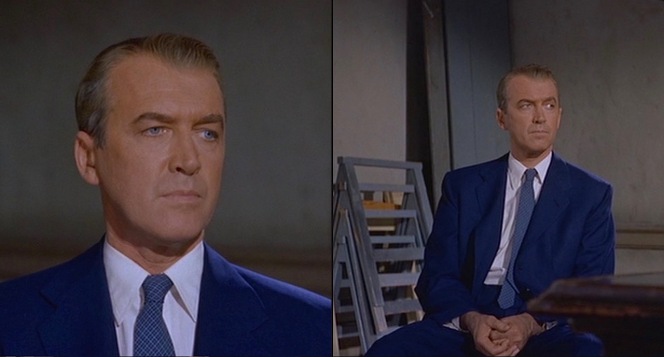 Keeping things appropriately low-key and monochromatic for a death inquest.

Later, we see Scottie at Ernie’s, where he wears a solid crimson red tie. 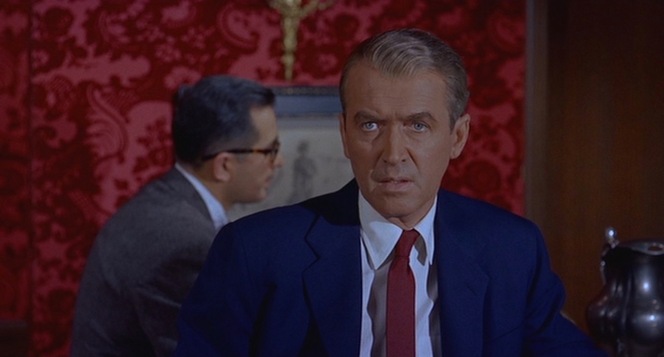 Red, white, and blue for a solitary night of drinking.

After meeting Judy, Scottie returns with her to Ernie’s in the hopes of recreating his experiences with Madeleine. He even returns to wearing a collar bar as well as this striped tie that he had worn earlier. This silk tie is striped in red and alternating shades and thicknesses of gray in the “downhill” American direction of right shoulder-down-to-left hip. Scottie wears this tie with both a silver collar pin and a silver tie bar. 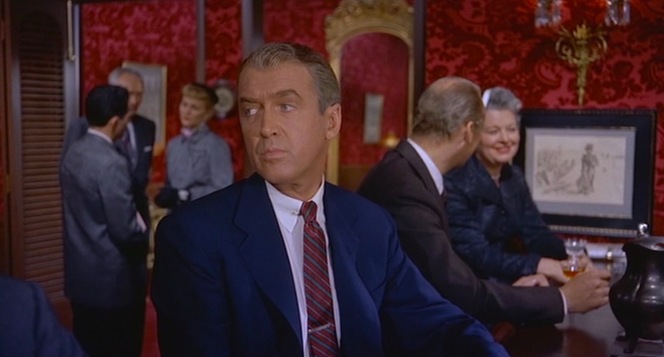 Keeping an eye on Madeleine, perched at the bar at Ernie’s. This was technically the first appearance of the suit, though it only made a single-shot appearance. He later wears the exact same thing in the same setting.

A brief vignette of Scottie dancing with Judy, prior to her Madeleine makeover, shows him wearing what appears to be a dark navy tie with thin, widely spaced white stripes in the same “downhill” direction. 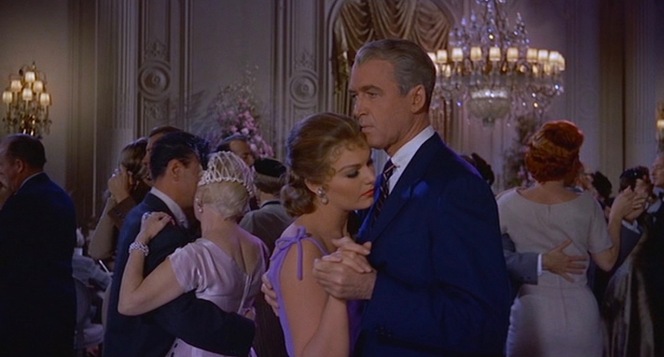 “Enjoying” a dance with Judy, wearing a little-seen striped tie. 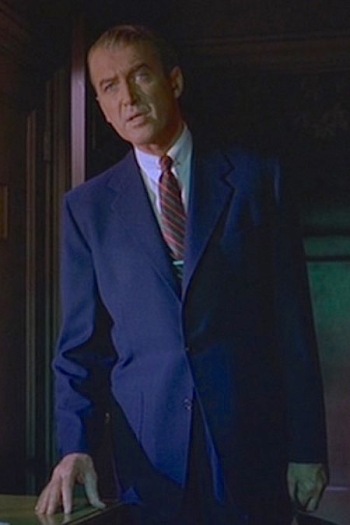 James Stewart’s Scottie Ferguson showcases how dressing boldly can still be tasteful and traditional with this vivid blue serge suit, one of several suits that he rotates through over the course of Vertigo.