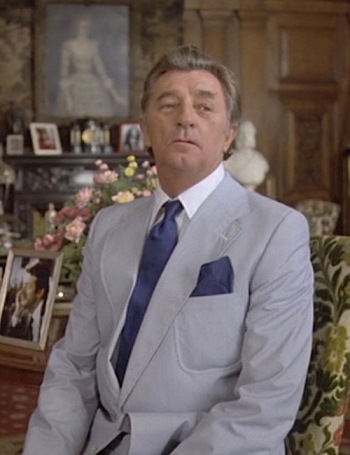 Raymond Chandler’s birthday was 130 years ago today (July 23, 1888), so I’m celebrating the hard-boiled author’s big day with a look at a cinematic portrayal of one of his most enduring creations, cynical private eye Philip Marlowe, as played by Robert Mitchum in this 1978 update of The Big Sleep.

Three decades after Humphrey Bogart and Lauren Bacall lit up the screen in the lead roles, Michael Winner directed this adaptation that moved the setting from noir-era L.A. to contemporary England and didn’t shy away from the controversial sex and drugs that the Hays Code forced Howard Hawks to avoid for his iconic 1946 film noir.

Thus, the 1978 film ends on a bleaker note, more faithful to the original novel as Marlowe confronts both Sternwood sisters, abandoning the Bogie-Bacall romantic subplot in favor of establishing our lone hero as “part of the nastiness now,” as he ponders the nature of death:

What did it matter where you lay once you were dead? In a stagnant lake or in a marble tower on the top of a high hill? You were dead, you were sleeping the big sleep, you were not bothered by things like that. Oil and water were the same as wind and air to you. You just slept the big sleep, not caring about the nastiness of how you died or where you fell.

For the film’s denouement, Philip Marlowe arrives at the Sternwood estate in a stylish summer suit in a blue-on-white hairline stripe with white contrast stitching on the swelled edges, pocket seams, and lapel buttonhole. The suiting appears to be either cotton or a cotton blend, a cool-wearing and comfortable choice for warmer weather.

As opposed to the bolder stripes associated with the classic seersucker suit, Marlowe’s suit is patterned with a narrow blue stripe on a white ground. 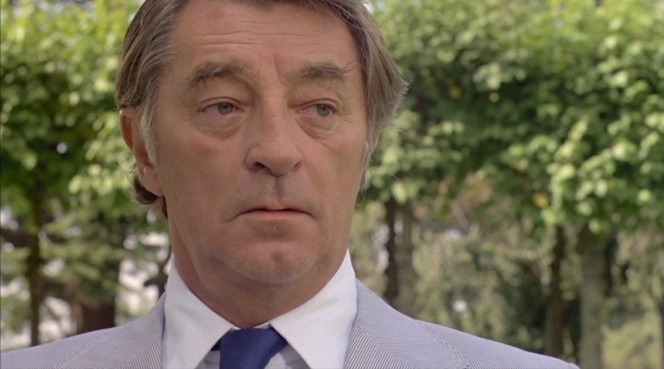 A closer look at the suit in shots like this reveals its faint stripe pattern.

The subtle striping of the suit gives it an overall light blue appearance that, with the neckwear, matches the powder-blue suit and dark blue suit stipulated by Raymond Chandler in his opening paragraph of The Big Sleep.

The single-breasted suit jacket has wide notch lapels with the white contrast stitching visible along the swelled edges and on the left lapel buttonhole. The lapels roll to a two-button front with mother-of-pearl buttons that match the three on each cuff. The jacket also has roped sleeveheads, a long single vent, and patch pockets on the left chest and hips.

The flat front trousers have a full fit and are slightly flared at the plain-hemmed bottoms per the trending style of the late ’70s. Mitchum wears a wide black leather belt through the trouser belt loops. 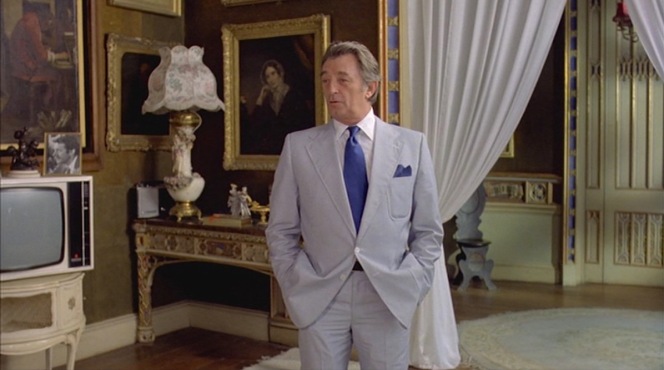 The stylish private eye wraps up a convoluted case.

Mitchum wears a white cotton shirt by famed London shirtmaker Frank Foster that has a semi-spread collar with long points consistent with 1970s trends. The shirt has a front placket and rounded cuffs that each close with a single button.

Returning from the blue-gray suit worn in the opening scene is the royal blue satin silk tie, knotted in a standard four-in-hand, and its matching pocket square. 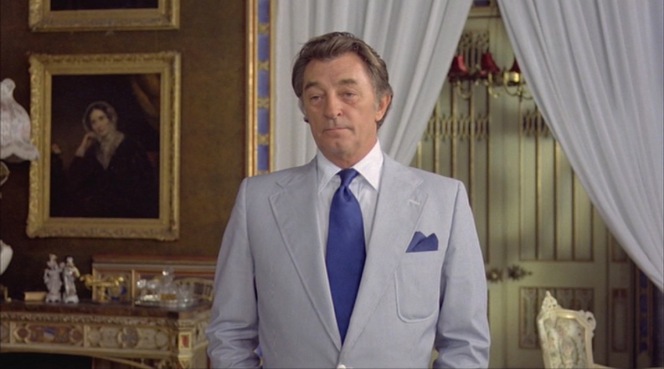 A matching tie and pocket square is often considered a sartorial no-no. At this point, Marlowe couldn’t care less.

The light, summery suit is somewhat countered by the black calf slip-on shoes, which appear to be the same high-vamp loafers with medallion perforated wingtips that he wears throughout the rest of the film. 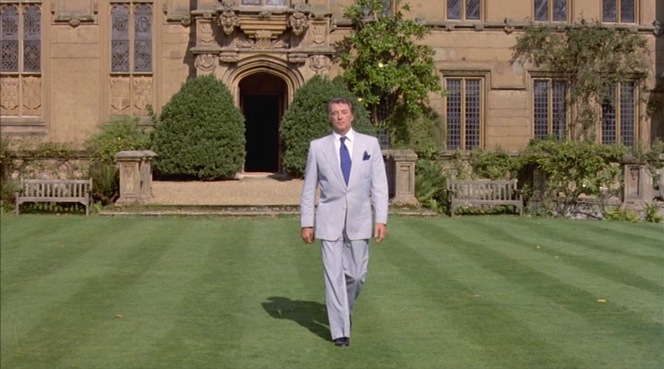 Marlowe crosses the lawn in his light summer suit and contrasting black loafers.

Not clearly seen but almost certainly present on his left wrist is the stainless Rolex DateJust with its silver dial and steel “Jubilee” bracelet that real-life Rolex wearer Mitchum wore on screen. 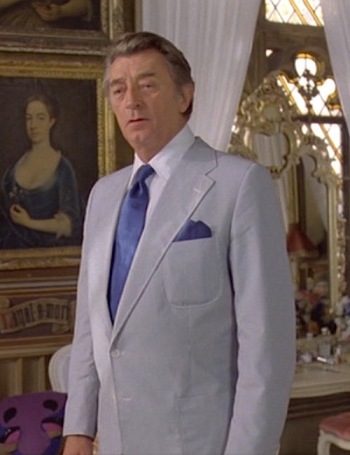 Robert Mitchum may have been a bit long in the tooth for this portrayal of Philip Marlowe, but he nonetheless brings a fresh, interesting, and contemporary fashion sense to the character.

If you’re looking to spend a few thousand on a contemporary update of this suit, check out this offering from Ermenegildo Zegna. 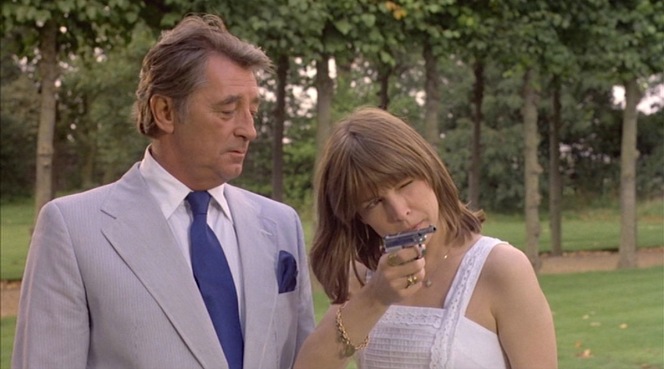 Marlowe is only slightly amused as Camilla Sternwood takes aim with her stainless Beretta .22.

The Beretta Minx (M4) is a longer barreled variant of the Beretta Model 950 subcompact semi-automatic pistol, with the tip-up barrel extended to 3.75 inches. Its low-recoil .22 Short rimfire round was the first American metallic cartridge, developed in 1857 for the Smith & Wesson Model 1 at a time when most revolvers fired cap-and-ball ammunition. It was quickly phased out by larger and more powerful rounds, but the fast and quiet .22 Short remained popular for target and sport shooting as well as for hunting small game like raccoons.

The Beretta Minx never attained the level of popularity as the more compact Model 950 Jetfire, and the final nail in the Minx’s coffin was placed when it was restricted from import to the U.S. in 1968. Production was swiftly ceased after 12 years.

Check out the movie and read Chandler’s 1939 novel.

Oh sure. All I itch for is money. I’m so greedy that for fifty pounds a day plus expenses on the day I work, I risk my future, the hatred of the cops, of Eddie Mars and his pals, I dodge bullets and put up with slaps and say “Thank you very much. If you have any further trouble, please call me. I’ll just put my card here on the table.” I do all that for a few pounds. And maybe just a little bit to protect what little pride a sick and broken old man has in his family, so that he can believe his blood is not poisoned. That his little girls – though they may be a trifle wild – are not perverts and killers.