Today would have been the 95th birthday of Paul Newman, the acclaimed actor, philanthropist, entrepreneur and motorsports enthusiast. Over his legendary career that spanned more than half a century, Newman’s sole Academy Award for acting recognized his performance in The Color of Money (1986), in which he reprised the role of “Fast Eddie” Felson that he had originated on screen in The Hustler (1961). END_OF_DOCUMENT_TOKEN_TO_BE_REPLACED

Robert Mitchum as Harry Kilmer in The Yakuza (1974)

Fall is here in the Northern Hemisphere, and it’s my favorite season for the cooler weather, the changing leaves, and the increased sweaters, corduroys, and tweeds that make their way from the back of the closet back into regular rotation. These autumnal staples get some particularly badass exposure in Sydney Pollack’s 1974 Japanese-set neo-noir The Yakuza as a 57-year-old Robert Mitchum joins Ken Takakura as they fight their way through Honshu from Kyoto to Tokyo in a variety of natty turtlenecks layered under tweed jackets and corduroy suits.

END_OF_DOCUMENT_TOKEN_TO_BE_REPLACED

Robert Mitchum as Harry Kilmer in The Yakuza (1974)

The unique neo-noir Japanese gangster movie The Yakuza was conceptualized by brothers Paul and Leonard Schrader based on Leonard’s letters to Paul while living in Japan, particularly about the yakuza and the screen presence of Ken Takakura. While Takakura was almost always guaranteed to play a role, the crucial positions of the director and the lead actor—who would portray an aging former detective sent to Japan in service to an old friend—were still in transition.

Early in the pre-production stages, it looked like Robert Aldrich would direct with Lee Marvin in the lead role, until Marvin’s clash with Warner Brothers led to Robert Mitchum taking the role. END_OF_DOCUMENT_TOKEN_TO_BE_REPLACED

Raymond Chandler’s birthday was 130 years ago today (July 23, 1888), so I’m celebrating the hard-boiled author’s big day with a look at a cinematic portrayal of one of his most enduring creations, cynical private eye Philip Marlowe, as played by Robert Mitchum in this 1978 update of The Big Sleep.

END_OF_DOCUMENT_TOKEN_TO_BE_REPLACED 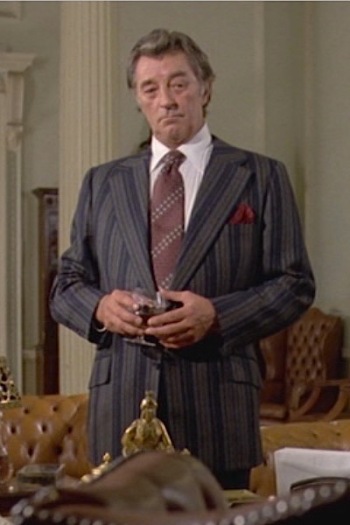 Philip Marlowe is a bold dresser. We learn that from the opening paragraph of Raymond Chandler’s inaugural novel, The Big Sleep, with the description of the detective’s powder blue suit, dark blue underpinnings, and socks with clocks. The rest of the United States may have adopted a somber approach to dressing during the years of the Depression, but Marlowe is an L.A. private eye. He’s gotta turn heads.

Decades after the novel’s publication and Bogie and Bacall sizzled in its first cinematic adaptation, the story was once again slated for the silver screen. END_OF_DOCUMENT_TOKEN_TO_BE_REPLACED

We catch up here with Marlowe the morning after he takes his case as he joins the police in their investigation of the Sternwood family’s chauffeur, dead in an apparent accident that soon reveals itself to be murder. Following a few leads takes Marlowe to a flat where he encounters blackmailer Joe Brody (Edward Fox), femme fatale Agnes Lozelle (Joan Collins), General Sternwood’s flighty youngest daughter Camilla (Candy Clark), and trigger-happy gunsel Karl Lundgren (Simon Fisher-Turner)… all of whom armed with a handgun but, as Marlowe wryly notes, no brains to boot. END_OF_DOCUMENT_TOKEN_TO_BE_REPLACED

Steve Martin as Vinnie Antonelli in My Blue Heaven (1990)

You know, it’s dangerous for you to be here in the frozen food section… because you could melt. all. this. stuff.

Steve Martin’s smooth-talking Vinnie Antonelli finds post-Mafia lifestyle to be more and more amenable in My Blue Heaven as he builds a suburban criminal empire and seduces a floozy in the frozen aisle of his local grocery store. END_OF_DOCUMENT_TOKEN_TO_BE_REPLACED

This is a big week for iconic actor birthdays! Today is the 77th birthday of Al Pacino, born April 25, 1940 in New York.

After a dormant post-Scarface career through most of the ’80s, Pacino shot back onto the screen in the following decade, returning to the part that made him famous as Michael Corleone in The Godfather Part III and taking on the role of confident and cut-throat real estate salesman Richard Roma in Glengarry Glen Ross from a screenplay adapted by David Mamet of his own Pulitzer- and Tony-winning 1984 play. END_OF_DOCUMENT_TOKEN_TO_BE_REPLACED

Halloween approaching is a fine time to address a monster in human form like Patrick Bateman who may have been a sharp dresser (for the ’80s) but was undoubtedly a terrible human being (in any era!)

You can tell Bateman is trying his best to be seen as a classy host; he plays Phil Collins, after all! Of course, Bateman is hindered by the fact that no classy evening should ever include the words “don’t just stare at it, eat it!” END_OF_DOCUMENT_TOKEN_TO_BE_REPLACED

Steve Martin with Rick Moranis in My Blue Heaven (1990). Sadly, this is just a promotional photo and Steve’s rad Ray-Ban sunglasses didn’t make it into this scene.

This week’s focus on dupioni silk continues with the loud red suit worn by Steve Martin in My Blue Heaven, posted today to celebrate my sister’s birthday as this flick is a family favorite that she and I are frequently quoting to each other.

Although Ray Liotta’s Henry Hill provides himself the living epigraph of living the rest of his life “like a schnook” at the end of Goodfellas, the story really didn’t end there. Loosely based on Hill’s post-mob life in the witness protection program, My Blue Heaven was written by Nora Ephron, who had been inspired by her husband Nicholas Pileggi’s interviews with Hill. Through the interview process, it was discovered that a career criminal like Hill didn’t reform himself immediately (if at all) and was often getting into trouble with authorities – returning to his old criminal ways, maintaining a high profile, and even entering a bigamist marriage under his “new” name – all depicted in My Blue Heaven. END_OF_DOCUMENT_TOKEN_TO_BE_REPLACED