Al Pacino as Michael Corleone in The Godfather (1972)

As we get closer to the holidays, today’s #MafiaMonday look from The Godfather is a fall-friendly approach to dressing for cooler weather and grayer days.

And the days are indeed gray for the Corleone family, particularly the recently returned Michael (Al Pacino). END_OF_DOCUMENT_TOKEN_TO_BE_REPLACED 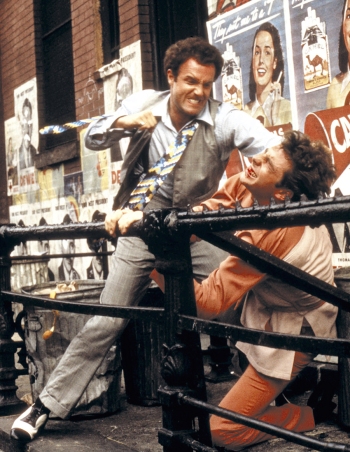 For this midsummer #MafiaMonday, BAMF Style is taking a look at this much-requested outfit from Sonny Corleone’s street takedown of his abusive brother-in-law Carlo Rossi (Gianni Russo).

It’s a hot June day in New York City. Carlo and his cronies are all out on the street, loafing around, listening to the radio, and not expecting much from their day… until a black sedan squeals to a stop, and out charges Sonny Corleone, charging after Carlo with designs on at least ruining the latter’s orange two-tone leisure suit. END_OF_DOCUMENT_TOKEN_TO_BE_REPLACED

Joe Spinell as Willi Cicci in The Godfather (1972)

Today’s #MafiaMonday post focuses on one of the more celebrated minor characters of The Godfather, Corleone family enforcer Willi Cicci, who stands out with his slick sense of style and laidback demeanor. Imagine if Dean Martin had grown a mustache and joined the mob… that’s Willi Cicci for ya.

Cicci best gets the opportunity to explain his short yet memorable role in The Godfather when testifying in front of a Senate committee in the film’s sequel. When we first meet him in The Godfather, Cicci is getting a shave in a hotel barbershop with an unflappable, can’t-be-bothered attitude that may trick first-time viewers into thinking he is one of the many targets that Michael Corleone has marked for death on this transformative day for the New York Mafia.

END_OF_DOCUMENT_TOKEN_TO_BE_REPLACED

Happy birthday to Al Pacino, born this day in 1940. It was The Godfather that arguably catapulted Pacino into public consciousness as one of the greatest actors of his generation, an impressive feat for an actor with only two preceding film credits. Although Paramount production chief Robert Evans had more box office-oriented names in mind for its central role ranging from Jack Nicholson to Robert Redford, Francis Ford Coppola insisted on Pacino who delivered in spades and received both an Academy Award nomination as well as a massive salary increase (from $35,000 to $600,000) to return as Michael Corleone in The Godfather Part II only two years later.

Although all of The Godfather is an acting tour de force for Pacino, there is one monumental scene often cited as the moment that truly established him as one of the most talented stars in the industry. An outsider to his family’s illegitimate business, Michael Corleone surprised everyone by offering to retaliate for the attempt on his father’s life by personally gunning down both the drug-peddling gangster and the corrupt police captain. Armed with the family’s blessing, an escape route, and a .38 taped behind an old toilet, Michael finds himself sitting across from these two criminals for – ostensibly – a peace meeting. END_OF_DOCUMENT_TOKEN_TO_BE_REPLACED 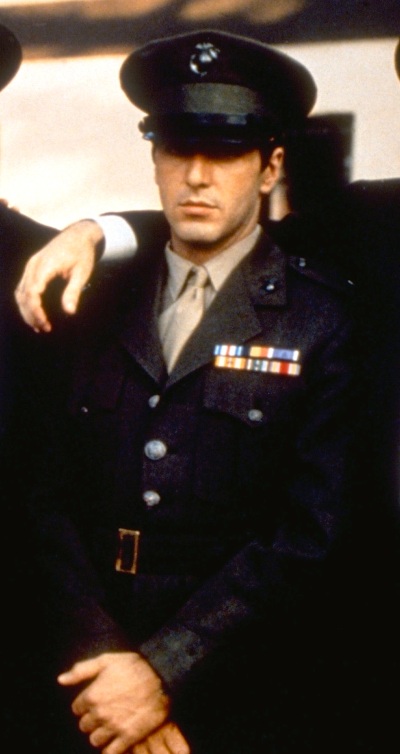 On the 70th anniversary of VJ Day, BAMF Style is looking at one of cinema’s most notorious fictional war heroes from the Pacific Theater of World War II: Michael Corleone.

(Just so we’re clear, BAMF Style believes that the true heroes of World War II are those that did not go on to become mob bosses.)

Michael arrives at his sister’s wedding wearing his traditional Marine “greens”, the winter service uniform worn from September through April. Although appearing brown on screen, the uniform – now known as the Service A (or “Alpha”) – is forest green wool in a color specific to the Marine Corps, dating back to its introduction in 1912. At the time, the winter service uniform was standard in garrison and on leave and liberty. Since the iconic dress blues were temporarily ceased for most of WWII, a Marine not wearing his utility uniform would almost always be seen in his winter service greens. END_OF_DOCUMENT_TOKEN_TO_BE_REPLACED

BAMF Style looks forward to Valentine’s Day this weekend with an abbreviated Week of Weddings.

James Caan as Santino “Sonny” Corleone in The Godfather (1972). This is a production photo; in the film itself, he pins a white carnation onto his left lapel.

Sonny is a natural choice as a groomsman for his sister’s wedding. Not only did he introduce her to her new husband, but he’s the underboss of New York’s powerful Corleone crime family and not the sort of guy who would appreciate being left out.

Sonny is a busy guy on the wedding day. He has to be all over the place, from the parking lot to his father’s office while keeping tabs on his war hero brother, his wife, and his mistress. Of course, when the Don summons him, he’s never far away. END_OF_DOCUMENT_TOKEN_TO_BE_REPLACED

Christmas shopping is an activity not traditionally associated with BAMF activity, but the tradition of exchanging gifts with family is fun. After all, Don Corleone says:

…a man who doesn’t spend time with his family can never be a real man.

So, in the spirit of Monday’s holiday list post, follow Michael Corleone as he and Kay Adams go on a midtown shopping date at Christmas. END_OF_DOCUMENT_TOKEN_TO_BE_REPLACED

Al Pacino on set as Michael Corleone in The Godfather (1972).

Last weekend, I attended a baptism. While other family members were snapping photos through tearful eyes, I kept picturing fat Clemenza blowing a guy away with a shotgun and Moe Greene getting the Bugsy Siegel treatment.

Whether or not you’re the type of person moved to sentiment by a baptism, anyone who has seen The Godfather can hardly forget the brilliance of Coppola’s juxtaposition between Michael admitting his son into the church while simultaneously sending his enemies to hell.

After returning to the United States and taking his slain brother‘s former mantle as boss of the Corleone Crime Family, Michael Corleone leaves behind the earth tones he sported earlier in the film. Gray is now his color of choice, reflected throughout his wardrobe. END_OF_DOCUMENT_TOKEN_TO_BE_REPLACED 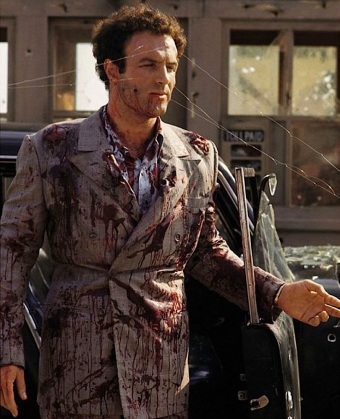 WARNING! Spoilers ahead… (and to the right!)

Yesterday, we examined an Aston Martin that was totally demolished by its use in the film. Here, we’re seeing another car put out of commission. Unfortunately, its owner meets the same fate. END_OF_DOCUMENT_TOKEN_TO_BE_REPLACED

For the final entry of BAMF Style’s Week of Weddings, we’re examining one of the cinema’s most iconic characters.

Marlon Brando as Vito Corleone in The Godfather (1972).

I really hope you saw this one coming.

You’ve come across the scene a million times, whether actually watching it, seeing photos, or hearing your friends quote it. And indeed it is one of the most quotable sequences in film history.

I’m gonna make him an offer he won’t refuse.