Today would have been the 95th birthday of Paul Newman, the acclaimed actor, philanthropist, entrepreneur and motorsports enthusiast. Over his legendary career that spanned more than half a century, Newman’s sole Academy Award for acting recognized his performance in The Color of Money (1986), in which he reprised the role of “Fast Eddie” Felson that he had originated on screen in The Hustler (1961). END_OF_DOCUMENT_TOKEN_TO_BE_REPLACED

Today marks the 103rd birthday of Eldred G. Peck, better known to the world as Gregory Peck after dropping his first name in pursuit of his now legendary acting career. Peck received five Academy Award nominations over the course of his career, finally winning the Best Actor statue for his performance in To Kill a Mockingbird.

Later in the decade, Peck starred opposite his friend Sophia Loren in Arabesque, Stanley Donen’s follow-up to Charade that—like its predecessor—blended elements of comedy, espionage, and romance into one Hitchcockian package, though even Donen had to admit that the film was more style than substance.

END_OF_DOCUMENT_TOKEN_TO_BE_REPLACED

Clark Gable with Ava Gardner and Grace Kelly in Mogambo (1953)

In my home state of Pennsylvania, the Monday after Thanksgiving is considered an unofficial holiday among hunters as the opening day of the state’s firearms deer season, a day when hunters are expected to bag approximately 25% of the season’s harvest, according to the Tribune-Review.

The 1953 adventure Mogambo stars Clark Gable as a hunter on safari in Africa with his eyes on even bigger game than deer: the hearts of Ava Gardner and Grace Kelly.

END_OF_DOCUMENT_TOKEN_TO_BE_REPLACED 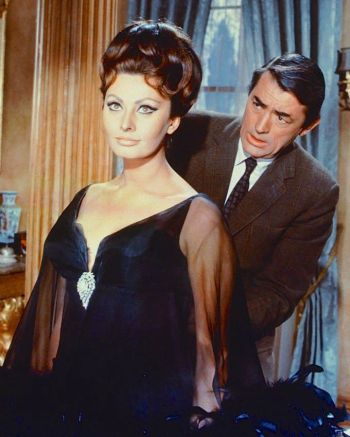 Three years after helming “the best Hitchcock movie that Hitchcock never made,” director Stanley Donen again returned to the romantic world of lighthearted espionage with Arabesque, based on Alex Gordon’s 1961 novel The Cypher. Like Charade before it, Donen brought two glamorous and popular stars together for a lighthearted and stylish spy story against a European backdrop.