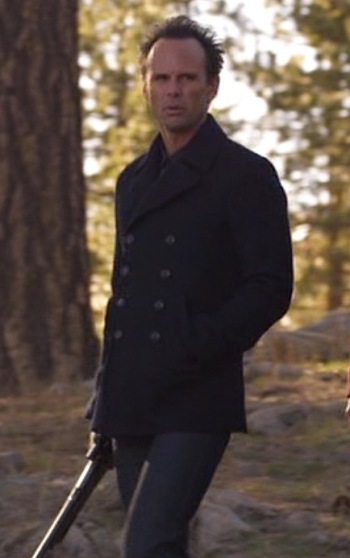 Walton Goggins as Boyd Crowder on Justified (Episode 6.07: “The Hunt”)

Next week is the start of deer hunting season here in western Pennsylvania*, so BAMF Style is taking a look at the appropriately titled “The Hunt”, the seventh episode of Justified‘s sixth and final season. The episode title primarily refers to the hunt for fugitive killer Ty Walker (played brilliantly by Timothy Olyphant’s fellow Deadwood alum Garret Dillahunt) but it also alludes to Boyd and Ava’s venture into the woods.

Ava: What the hell, Boyd?
Boyd: We going hunting.
Ava: What?
Boyd: First day of razorback season, state of Kentucky. I already got the coffee going.
Ava: What time is it?
Boyd: It’s early. And we need to get to the stand while the sun is rising if we gonna bag us a shoat.

END_OF_DOCUMENT_TOKEN_TO_BE_REPLACED 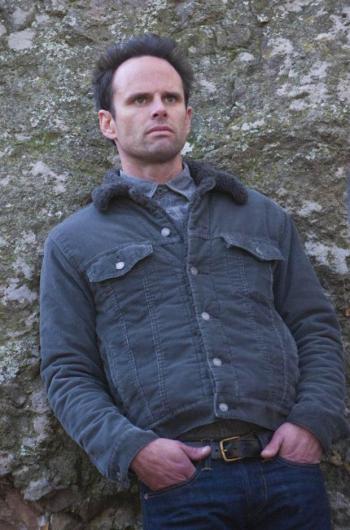 Fresh out of prison, Harlan County’s wiliest and wittiest criminal mastermind Boyd Crowder finds himself in the backwoods of his old Kentucky home, teaching his particular brand of religion to a congregation of redneck drug slingers. Not satisfied with having shot him in the chest earlier that year, Deputy U.S. Marshal Raylan Givens shows up and rubs proverbial salt in Boyd’s wound by reminding the “congregation” that there is a standing $50,000 reward for anyone who can provide information sending their new leader back to prison. END_OF_DOCUMENT_TOKEN_TO_BE_REPLACED

For great fall attire, one needs look no further than Justified on FX. The show’s pragmatic anti-hero, Boyd Crowder, came a long way from being the thuggish white supremacist bank robber we met back in the pilot. By the middle of the fourth season, he’s shaping up his own criminal empire in Harlan County and enjoying a romance with his deceased older brother’s widow. (It should be noted that said widow had actually shot his older brother to death with a shotgun… Boyd is evidently the forgiving type.)

With his character transformation came a major costuming transformation. Boyd can’t be pigeon-holed into a particular stratum of the criminal underworld, and his wardrobe reflects that. He needs to look respectable enough for urban mobsters like Wynn Duffy while still keeping in touch with the good ol’ boys under his employ. The result is a mishmash of rustic formality that suits Boyd’s particular brand of dapper style. END_OF_DOCUMENT_TOKEN_TO_BE_REPLACED