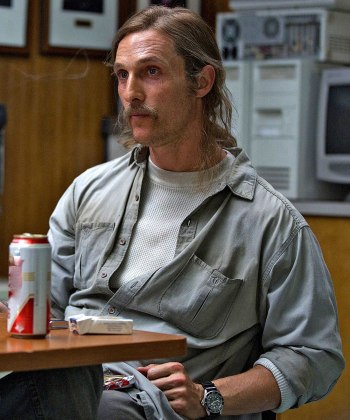 Don’t be assholes. You wanna hear this or not?

Rust Cohle challenges his interrogators at the outset of “The Long Bright Dark”, the premiere episode of HBO’s True Detective, indicating to us as well as detectives Thomas Papania (Tory Kittles) and Maynard Gilbrough (Michael Potts) that a wild ride is ahead. What followed were eight ambitious and rewarding episodes that delved into pessimistic philosophy and toxic masculinity, all bursting at the seams with shades of southern Gothic suspense, Lovecraftian supernatural horror, and the bleakest of comedy.

Matthew McConaughey is nearly unrecognizable for his first appearance as Rust Cohle, appearing 17 years after the detective was called to the scene of a bizarre ritual murder in Vermilion Parish, Louisiana. While the 1995 Rust Cohle had no doubt lived a rough life from years of working undercover with biker gangs and getting popped with a .25, the rutted version of him presented in 2012 lives up to Marty Hart’s reaction: “Father Time has had his way with his all… looks like you must have pissed him off.”

The insult hardly stings Rust, though the reference to time must have intrigued him as he had spent much of his extended session with detectives Papania and Gilbrough pondering its very notion:

You ever heard of something called the M-brane theory, detectives? It’s like in this universe, we process time linearly forward, but outside of our spacetime – from what would be a fourth-dimensional perspective – time wouldn’t exist, and from that vantage, could we attain it? We’d see… our spacetime would look flattened, like a single sculpture with matter in a superposition of every place it ever occupied, our sentience just cycling through our lives like carts on a track. See, everything outside our dimension… that’s eternity, eternity looking down on us. Now, to us, it’s a sphere, but to them… it’s a circle.

It’s one of many bewildering yet brilliantly delivered monologues from McConaughey during these 2012 sequences, which begin in the first episode as Rustin Cohle defiantly flips his Zippo to light one of his Camels, prompting Papania to slide him a BIG HUG MUG that would become almost as iconic as Rust’s six pack of Lone Star tall boys and drooping mustache. “Start askin’ the right fuckin questions,” Rust demands after a series of superficial inquiries, sitting back to await their next as The Black Angels’ “Young Men Dead” closes out the first episode.

Soon, the “right” questions start coming and Cohle recounts everything from the facts of the 1995 Dora Lange murder to the art of interrogation, religion, fulfillment and closure, and the original sin of being a parent, reflecting on the “hubris it must take to yank a soul into non-existence into this meat… to force a life into this thresher,” and how his daughter’s death “spared [him] the sin of being a father.”

This is what I mean when I’m talkin’ about time… death… futility.

If his nonchalance didn’t give it away, Rust Cohle’s ragged clothing and unkempt appearance when he shows up for his interview with detectives Gilbrough and Papania in April 2012 should communicate to the two detectives exactly how concerned he is in the proceedings. After all, the interview starts dangerously close to the time that Rust typically starts drinking on Thursdays.

With their frayed edges and worn-in dirt, Rust’s clothes appear to have followed him from his eight years off the grid in Alaska to his current status, low on the totem pole in rural Louisiana. As costume designer Jenny Eagen explained to Medium in 2014, “Finally in 2012, we know Rust was working at a bar in a small town, no need for anything to tell the story. I gave him the tools, he was Rust, we didn’t need to tell a story in his clothes.”

Dressed entirely in washed-out neutral tones that help him blend into the background, Rust’s frayed clothing works with his craggy aged features and stringy hair to present the appearance of a man who has essentially turned to dust. This is a Rust Cohle that life has forgotten about… and he doesn’t mind it that way. 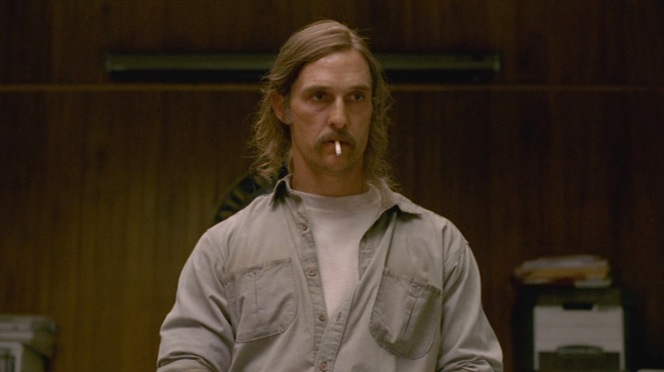 Rust Cohle sizes up his interrogators in “The Long Bright Dark” (Episode 1.01).

Rust wears an oversized work shirt in a stone-colored washed cotton, similar to the canvas shirts that have been mainstays in the apparel offerings of Cabela’s, Eddie Bauer, L.L. Bean, and other outdoors-oriented outfitters for decades. In fact, it was probably secondhand even when Rust first picked it up.

The shirt has a point collar, front placket with sand-colored plastic sew-through buttons, and two inverted box-pleat chest pockets that are rounded on the bottoms and close through a single button at the top. The elbows are reinforced with self-patches that have double-stitched seams as do the pockets and placket. 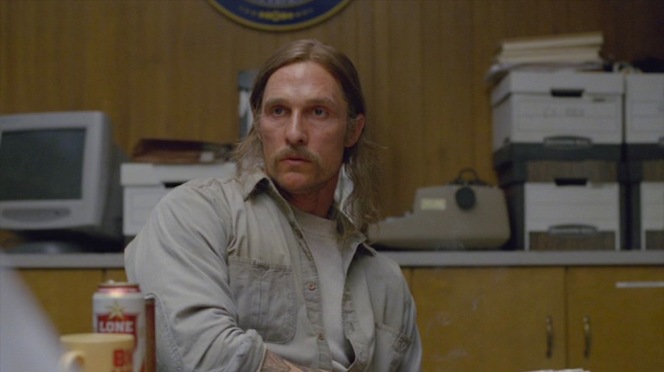 April isn’t a particularly cold month in Lafayette, Louisiana, and yet Rust wears the thermal under layer of a long-sleeve ivory cotton T-shirt with a textured “waffle” knit. He rolls the sleeves up along with his overshirt. 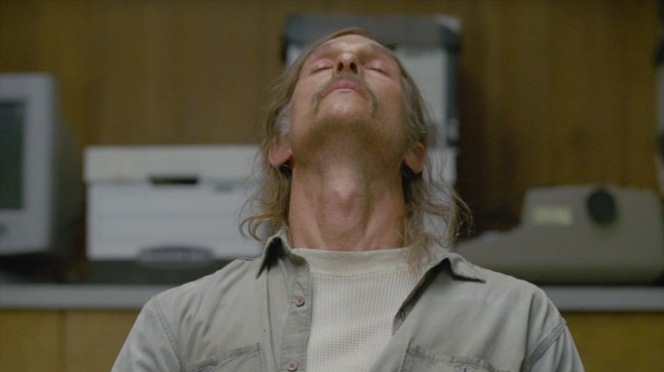 The low-contrast neutrality of Rust’s outfit is emphasized with his choice of faded gray denim jeans with a boot cut. The jeans have the usual five-pocket layout with his wallet kept in his back-right pocket and attached with a silver-toned chain across his right hip to a belt loop in the front. His belt is almost assuredly the same thick black leather belt with the steel double-prong buckle that he wears elsewhere in the 2012 sequences. 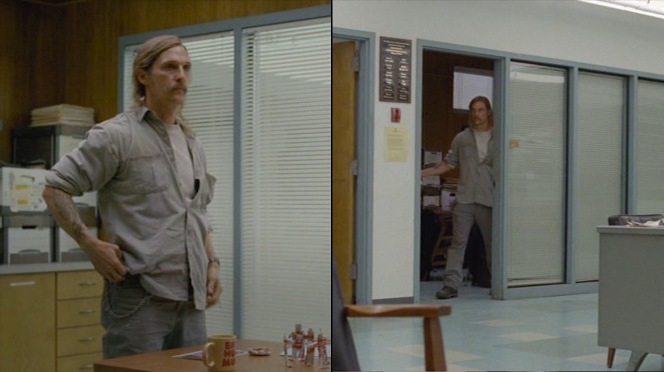 Rust takes his leave in “The Secret Fate of All Life” (Episode 1.05) after the interview with Papania and Gilbrough goes sour… even more than it had been already. 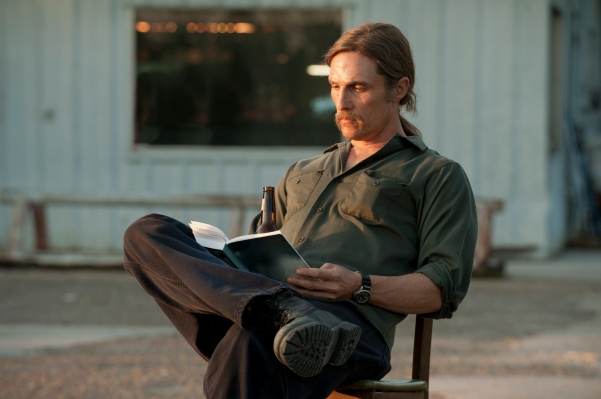 Rust appears to be wearing the same boots throughout the 2012-set scenes, as seen in this production still from a different scene.

Rust’s stainless steel dive watch has been the subject of much speculation in the years since the show first debuted on HBO. Many brands are still tossed around as possibilities, including Citizen, Orient, Seiko, Timex, and even Rolex. However, the speculation all but ended when an e-true detective, “AJMc” on the WatchUSeek forum, reported that he received confirmation from the show’s property master Lynda Reiss that the watch supplied for Matthew McConaughey was indeed a Lorus dive watch from the mid-1990s. 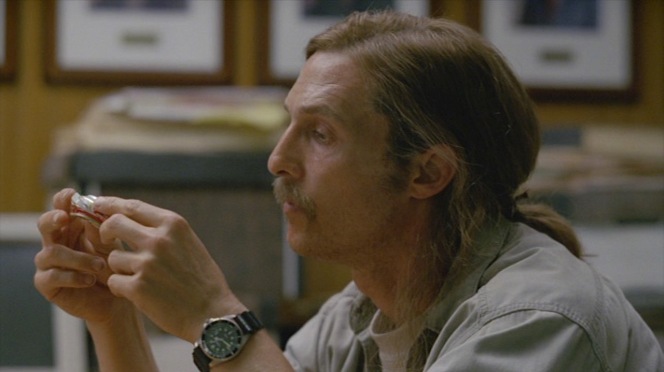 “Time is a flat circle” could also be a roundabout way of describing the typical look of a watch face?

Based on this information and the appearance of Rust’s stainless watch with its black bezel, black dial with cyclops at the 3:00 date window, and “Mercedes” hands, the model was deduced to likely be the Lorus Tidal LR 0021 diver.

One of the strongest arguments that Citizen proponents used was the fact that McConaughey is clearly wearing a ridged black resin Citizen PVC sport strap with the words “WIND VELOCITY” printed in white on the end of the strap with smaller measurements (m/sec in white, knots in yellow) further toward the inside of the wrist that help validate the theory. (See here.) 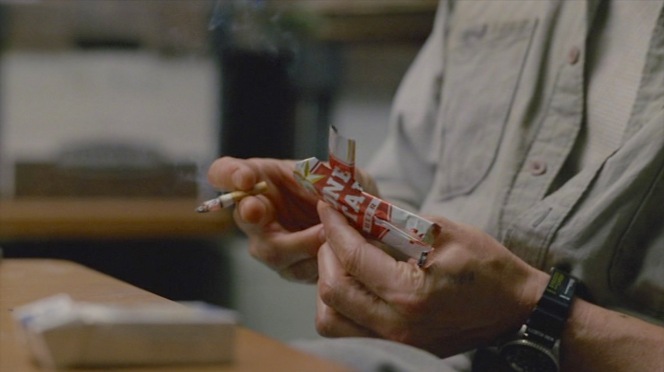 However, the word of the prop master and the fact that “LORUS” can be faintly read on the dial in some production stills and screenshots overrule theory, and we can all sleep well knowing for sure that Matthew McConaughey wore a Lorus dive watch from the mid-1990s worn on a resin Citizen strap for his role as Rust Cohle on the first season of True Detective.

Rust Cohle belongs to that lonely class of confident people who would interrupt police questioning to make a beer run. Naturally, Papania and Gilbrough voice their objections, but Cohle the old pro knows there’s no reason to adhere to their advice to “hold off on that for a while.” If they’re not planning on his deposition to be admissible, then he may as well loosen himself up.

“‘Cause it’s Thursday, and it’s past noon. Thursday is one of my days off. My off days, I start drinkin’ at noon. You don’t get to interrupt that.”

To reinforce his demand, Rust not only places a five-dollar bill on the table, but blows it across to Papania. When the detective finally gives in and rises, grabbing the bill, Cohle adds that “I’d appreciate a little hustle on that.”

Sure enough, Papania returns with a six pack of Lone Star beer in 16 oz. cans. 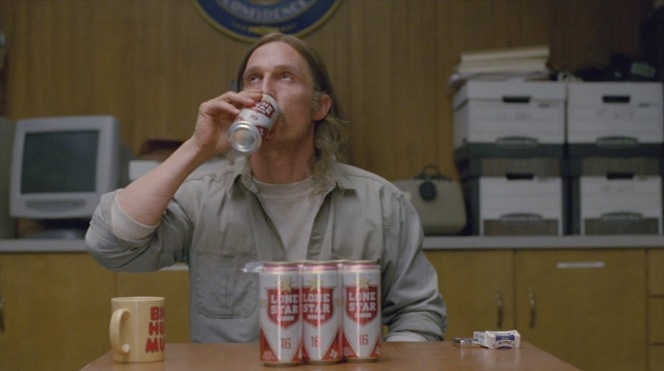 “Thank you, boys. We almost had a moment there.”

While this may be the most prominent and enduring screen time that “The National Beer of Texas” receives in True Detective, it’s far from the last as everyone from cops to criminals seems to take a few swigs of Lone Star over the series’ eight-episode run.

Now owned by Pabst Brewing, the brand was founded by Adolphus Busch in 1884 when Lone Star Brewery became the first large mechanized brewery in the state of Texas. Despite the name of the brewery, the first brew to actually carry the Lone Star label was produced in 1940 from a formula by Munich brewer Peter Kreil. In the decades to follow, Lone Star became a popular onscreen symbol for Texan culture, appearing in movies and TV shows like White Lightning, Urban Cowboy, Dallas, From Dusk Till Dawn, No Country for Old Men, W., American Sniper, and the first season of True Detective. 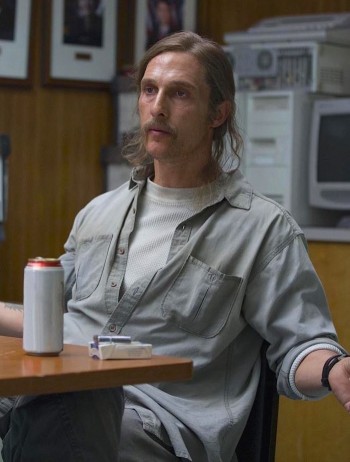 Rust Cohle’s “washed out workingman” attire from his 2012 interviews with Gilbrough and Papania inspired many parodies, but the ragged, neutral clothing does much to both establish his character to the audience and show how far he has fallen from the master interrogator and investigator he had been just a decade prior.

If you saw this Rust Cohle questioning a perp in the interrogation room, you’d probably think the handcuffs belonged on Rust. If you saw him nursing a Lone Star and a pack of Camel Lights at the end of a dingy dive bar, however, you wouldn’t think a second thought after “oh, that makes sense.”

Even with all his laconic swagger, Rust Cohle the civilian is wise enough to not bring a gun into the police station. He does, however, carry a folding knife that he uses to great effect to carve the Lone Star cans into a tableau. 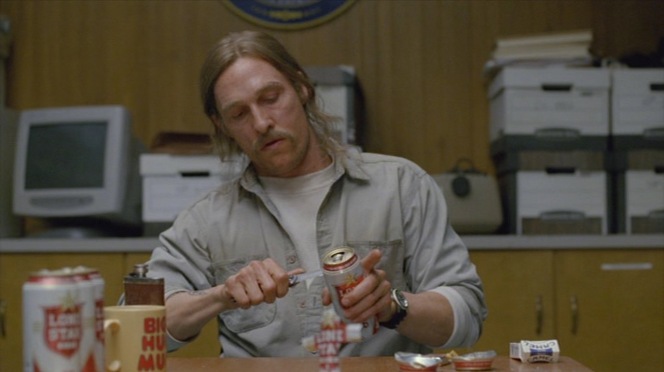 If the can wasn’t already open, you might think Rust was trying to shotgun some Lone Star in the middle of his questioning.

Rust carries the exact same knife that his character used 17 years prior, a Smith & Wesson First Response Rescue Knife. This stainless steel knife has a 3.3″ folding blade and a black “grippy” G10 inlay, as described at Knife Center where the knife is currently offered for less than $10 as of September 2018. 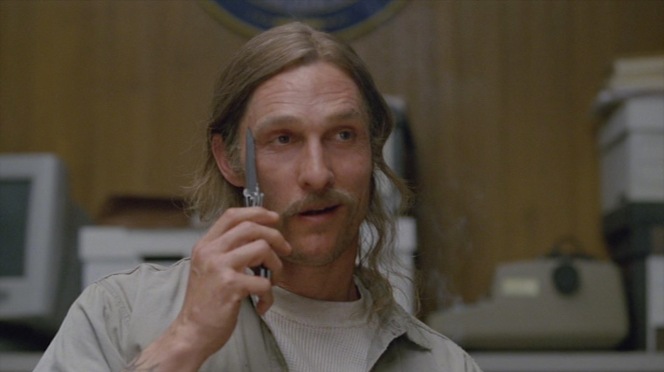 Check out the first season of True Detective.

HBO hit a rare sophomore slump with the far-from-beloved second season of True Detective, putting the show’s future in jeopardy. However, recently released previews for the show’s third season – scheduled to premiere in January 2019 – promise a return to form that reflects the elements that had made the first season such a phenomenon.

I know who I am. And after all these years, there’s a victory in that.