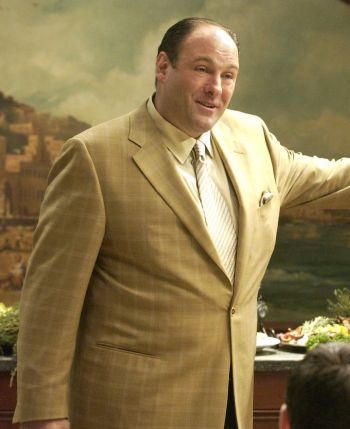 This week’s #MafiaMonday post celebrates the late James Gandolfini, the award-winning actor who would have celebrated his 57th birthday tomorrow.

Gandolfini won multiple awards, including three Emmys, for his performance as the tough yet troubled gangster Tony Soprano on HBO’s The Sopranos, setting the foundation for future TV icons. TV Guide columnist Matt Roush wrote in the first issue of the magazine after Gandolfini’s death that, “Without Tony, there’s no Vic Mackey of The Shield, no Al Swearengen of Deadwood, no Don Draper of Mad Men (whose creator, Matthew Weiner, honed his craft as a writer on The Sopranos).”

The latter seasons of The Sopranos feature Tony Soprano sporting more windowpane-patterned sport jackets that range in color from the earthy, neutral spectrum to colder tones of blue and gray. With fall on the horizon, let’s explore one of the earthier ensembles. 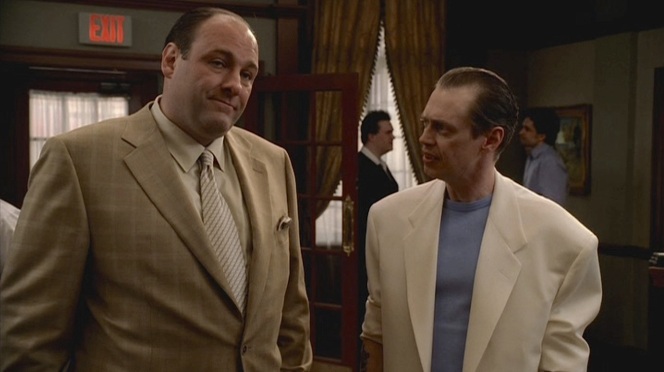 Is this The Sopranos or Miami Vice?
Artie Bucco calls out Tony B.’s anachronistic wardrobe, asking “Where’s Tubbs?” at his homecoming party. Maybe Quintina should have let “Tony Uncle Johnny” take “Tony Uncle Al” shopping for some new suits instead of parading him around like a scrawny Don Johnson.

Tony Soprano wears this tan worsted sport jacket patterned with a subtle cream plaid windowpane consisting of sets of four stripes criss-crossing horizontally and vertically. It has notch lapels and closes with a single front button. The single-button tailored jacket was most popular in the 1960s, though it has recently been re-emerging as a style offered by many brands from high fashion houses down to budget-oriented online “tailors”. The quality of Tony’s tailoring is indicative with the placement of his single button, not too high and not too low.

The ventless jacket has straight jetted hip pockets and a welted breast pocket, where he always wears a pocket square that coordinates with his tie, whether it’s made from the same patterned fabric, as seen in “Rat Pack” (Episode 5.02), or a solid color that echoes a shade in his tie, as seen in “In Camelot” (Episode 5.07). Typically, the latter is more advisable than the potentially tacky-looking practice of sporting a matching tie and pocket square.

An additional noteworthy detail of Tony’s sport jacket is the presence of four functioning buttons on the ends of his sleeves, which Tony shows off by frequently wearing the button closest to the wrist undone. The term “surgeon’s cuffs” is often applied to this style of functioning cuff buttons, referring to a theory that it was more efficient for 19th century military surgeons to just unbutton their cuffs and roll up their sleeves before performing a battlefield operation rather than remove their jackets.

Wearing one or more “surgeon’s cuff” buttons undone is often considered a rakish way for gents to show off, as working sleeve buttons – and the difficulty of altering a jacket with them – was once a better indicator of quality than it is now with lower priced (and lower quality) brands imitating this detail.

Note the unbuttoned cuff button closest to his wrist. All of the buttons on this sport jacket are brown plastic 4-hole sew-through buttons with tan edge trim. 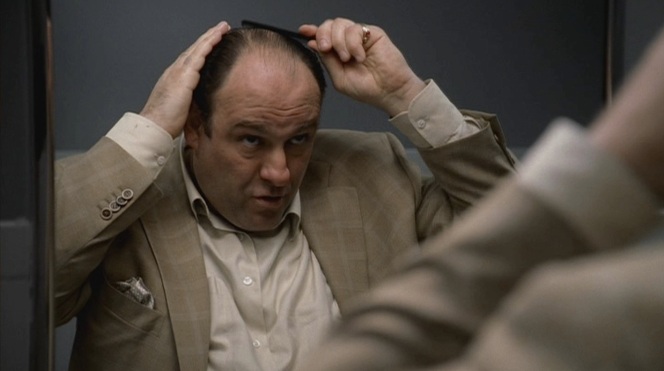 Tony loses the tie after the party moves from the respectable, family-friendly trappings of Vesuvio to the Bada Bing. (He does, however, wear all four cuff buttons fastened.)

Tony’s silk tie in “Rat Pack” follows the color scheme of his shirt and jacket in a geometric pattern of mini triangles with taupe borders on a beige ground. A series of shapes are filled in taupe rather than beige to create a repeating effect of stripes in the “uphill” (right-up-to-left) direction. 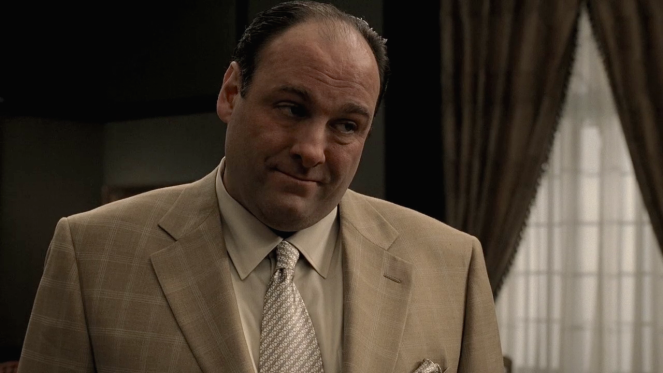 Tony’s tie and pocket square in “Rat Pack” (Episode 5.02) were both clearly made from the same patterned silk, often considered a no-no in the sartorial purist community.

For an afternoon rendezvous at Fran Felstein’s apartment in “In Camelot” (Episode 5.07), Tony wears the same jacket with a coffee brown-colored dress shirt with the same semi-spread collar, plain front, breast pocket, and single-button cuffs as his other shirt.

Tony wears another multi-colored silk tie with a complex pattern that creates an “uphill” stripe effect, though this tie consists of a broken pattern of bronze, beige, black, and purple criss-crossed striping. Mercifully, he opts for a solid-colored pocket square in periwinkle satin silk, nicely drawing out the purple tones of his tie and creating a more colorful effect overall. 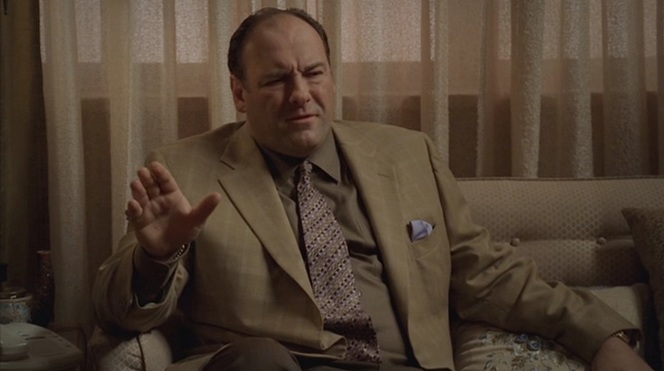 Tony has a little more fun with color in “In Camelot” (Episode 5.07). Perhaps when paying a visit to a woman who had dalliances with his own style icon, JFK, Tony knew he had to bring his A game.

Tony always balances this light plaid jacket with a pair of full-fitting brown pleated trousers that are styled to match his usual preferences with belt loops, double pleats, and turn-ups (cuffs) on the bottoms. Gandolfini was known to wear trousers from Italian fashion house Zanella on the show, particularly the later seasons, and it’s likely that these trousers are made by Zanella as well.

He first wears a dark chocolate brown pair for Tony Blundetto’s party in “Rat Pack” (Episode 5.02), then a lighter, softer-toned pair of mid-brown trousers for his final visit to Fran’s in “In Camelot” (Episode 5.07). 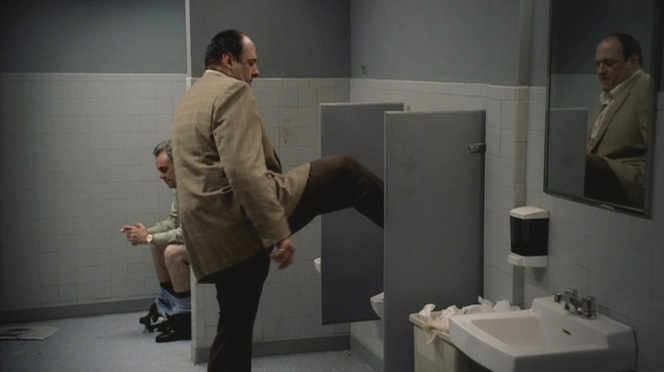 Tony’s move of using his foot to flush the urinal is relatable, but Johnny Sack sitting on the toilet in a public bathroom without a door on the stall? Fuhgeddaboudit.

Given the colors of his outfit, Tony opts for brown leather in his belt and shoes. His dark brown leather belt has a squared steel single-prong buckle. His cap-toe lace-up shoes are also dark brown. 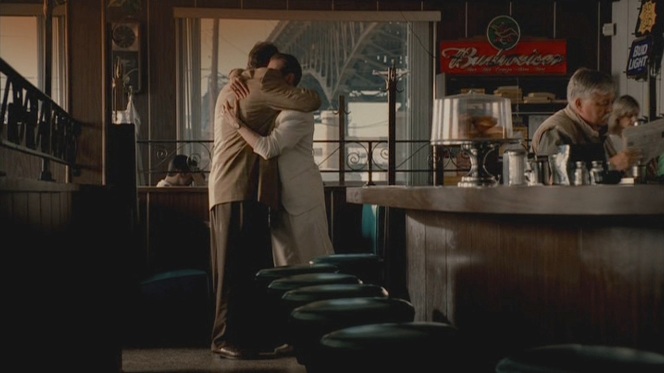 Tony wears all gold jewelry and accessories. Around his neck is a gold open-link chain necklace with a pendant of St. Jerome, whose feast day is coming up on September 30. He also wears his usual yellow gold chain-link bracelet and gold pinky ring with its diamond and ruby stones, both on his right hand.

Tony’s luxury watch is an 18-karat yellow gold Rolex Day-Date ref. 18238 “President”, so named for its distinctive link bracelet with a hidden clasp. This chronometer has Roman numerals around the “champagne” gold dial with a long display for the day of the week at the top and a date window at 3:00. 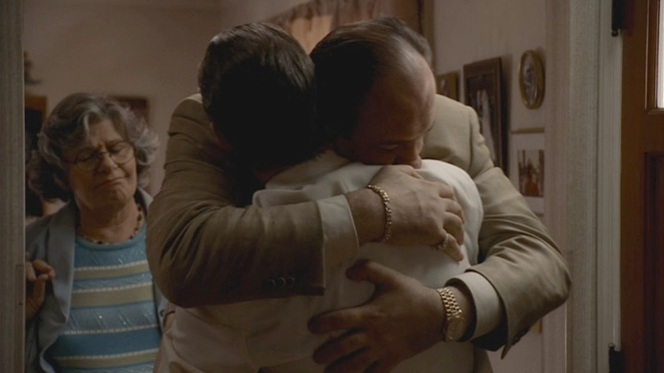 Strangely, a very similar jacket makes an appearance for a brief scene in “Sentimental Education” (Episode 5.06) as Tony dines at Vesuvio, wearing it with a silky black shirt with a black silk pocket square but no tie. At first glance (and likely second and third glance as well), you’d be forgiven for thinking this tan windowpane jacket with its subdued cream plaid pattern is the same as the one we’ve been exploring above, particularly as it falls right between both episodes where said jacket appears.

However, a closer look reveals that the “Sentimental Education” jacket has a slightly more pronounced plaid pattern though it consists of three (rather than four) stripes per set and the stitching on the left lapel buttonhole appears to be slightly darker with more of a contrast to the suiting. 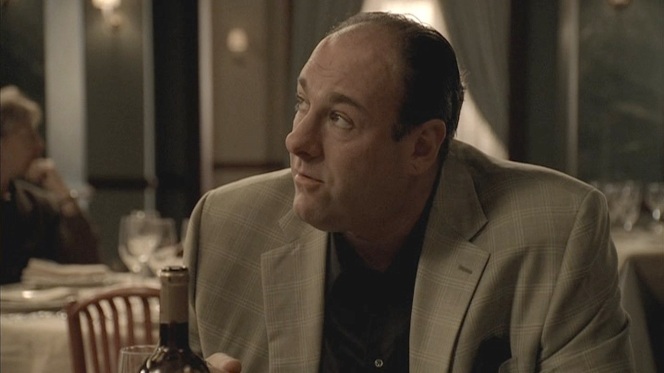 And if you think the differences are just an optical illusion, pick a spot of Tony’s jacket – like the right collar just above the notch – and compare the plaid. On this jacket, the plaid is visible right on that spot; on the other jacket in “Rat Pack” and “In Camelot”, this spot has no plaid. 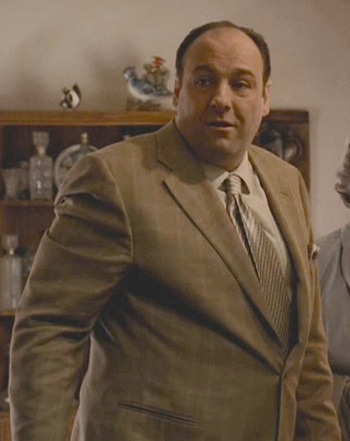 As Tony Soprano’s power grew, so did his elegant wardrobe. While he was no stranger to the shell tracksuits of his associates like Paulie Walnuts, Tony always looked his most self-assured in a tailored sport jacket and silk tie.

Tony Soprano, a dedicated Scotch drinker who typically doesn’t dilute his alcohol with any mixers unless its a touch of anisette or sambuca in his coffee, accepts what appears to be a Manhattan mixed for him by Fran Felstein in “In Camelot” (Episode 5.07).

Other than the fact that she serves them up and garnished with a single maraschino cherry, we don’t know much about Fran’s Manhattans. The only whiskey brand visible in her home is Dewar’s, and she certainly wouldn’t be using Scotch in her Manhattans. If you are in a pinch for a Tony-approved brand for your Manhattans, the only non-Scotch whiskey that he is seen drinking over the course of The Sopranos is a single instance of him drinking Wild Turkey a few seasons earlier, and bourbon is certainly a welcome ingredient for a Manhattan. 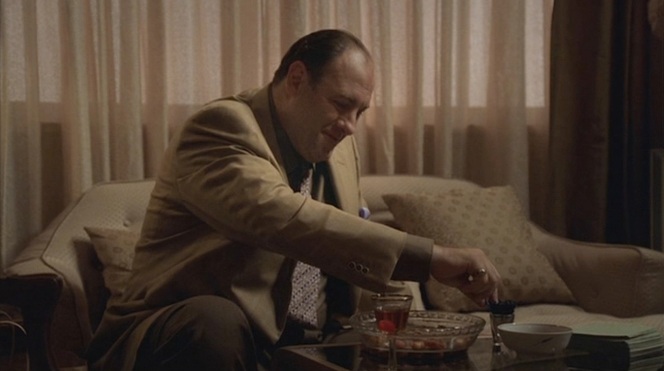 Tony indulges in the same culinary pleasures that Fran had likely bestowed on his own father a generation earlier.

Water chestnuts wrapped in bacon… and dip them in the duck sauce.

Fran’s hors d’oeuvre for Tony’s visit in the same scene is one of the simplest satisfying recipes for entertaining, and it appropriately dates back to the mid-20th century era when Fran was in her peak Judy Exner phase, serving as a gangster’s arm candy by day and a president’s boudoir buddy at night.

To make bacon-wrapped water chestnuts, Genius Kitchen suggests you marinate the water chestnuts in soy sauce for an hour. After draining them, roll the marinated water chestnuts in brown sugar and wrap them each in a half-slice of bacon. For good measure, arrange them on a foil-wrapped baking pan and secure each one with its own toothpick, then bake them at 400 °F for 30 minutes or until they’re golden brown.

A slightly different take, adapted in Toledo’s daily newspaper The Blade, suggests brushing each half-slice of bacon with Dijon mustard and sprinkling them with brown sugar before wrapping it over each water chestnut. I suspect Genius Kitchen’s soy sauce-marinated recipe would work more cohesively with Fran’s duck sauce accompaniment, but to each their own!

I remember growing up, I was always asking why I just used to have sisters. I said to my mother, I said, “Can’t you save up something and then get me a baby brother?” And my mother said, “What’s wrong with your cousin Tony?” And she was right, ’cause we were brothers. Except, you know, we had the same name. There was like fifty Tonys in the family. Some of you remember this. My dad’s name was Johnny and his dad’s name was Alfred. And so whenever we were out running around and we’d hear “Tony Uncle Johnny,” that was for me. And “Tony Uncle Al,” that was for him. And there was “Tony Uncle Philly!” Remember? But he passed away – buon’ anima – and Uncle Phil… Uncle Phil, he passed away a long time ago, too. So anyway… Tony’s being away has been hard, but he’s back now, for good…so welcome home.