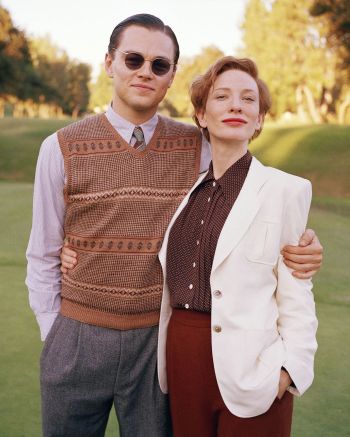 Leonardo DiCaprio and Cate Blanchett in The Aviator (2004)

Tomorrow is the final day of the TOUR Championship, the final event of the 2019 PGA Tour season with a purse of $9,250,000 awarded to the first place golfer. Golf and wealth culminated for a brief but stylish scene in The Aviator (2004), Martin Scorsese’s biopic of twenty momentous years in the life of aviation and movie mogul Howard Hughes.

As the eccentric industrialist’s business success and Hollywood influence grows, the audience is treated to a sequence that finds the golf enthusiast Hughes (Leonardo DiCaprio) joined on the links by Katharine Hepburn (Cate Blanchett, who won a well-deserved Academy Award for Best Supporting Actress in the role), scored by the Benny Goodman Quartet’s jaunty take on “Avalon”. The cinematic Hughes’ golf obsession is true to life, to the point that Noah Dietrich had recalled his new boss telling him in the mid-1920s: “My first objective is to become the world’s number-one golfer… second, the top aviator, and third I want to become the world’s most famous motion picture producer.” 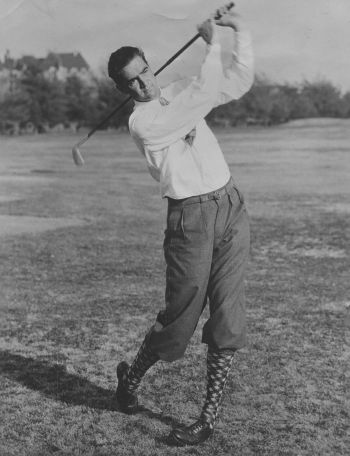 The real Howard Hughes was indeed a golf enthusiast, as seen in this 1930s photo, so it makes sense that his hobby would be depicted on screen.

“Follow-through is everything in golf, just like life,” Blanchett’s Kate advises Howard, followed by her hallmark lighter-than-air laugh and machine-gun fire questions about everything from the theater to politics, urging Hughes to vote in presidential elections as it’s his “sacred franchise!”

Time has progressed about eight years from the opening scenes on the set of Hell’s Angels to the summer of 1935, with the unique look of the scene reflecting the color abilities of motion pictures at the time in an innovative post-production process developed by Joshua Pines of Technicolor Digital Intermediates.

DiCaprio’s Howard Hughes spends his day on the links with Katharine Hepburn in a sweater vest that appears to have been inspired by the Fair Isle knitting tradition, a technique originating from the Shetland Islands that grew in popular during the roaring ’20s when Fair Isle jumpers were worn by the Prince of Wales.

Note the unique coloration to reflect the capabilities of movie production in the mid-1930s. 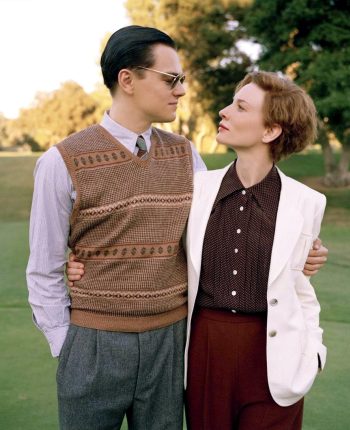 Leonardo DiCaprio and Cate Blanchett in The Aviator (2004). Photo by Andrew Cooper.

Hughes’ pullover sweater vest is woven in copper, chocolate brown, and cream with the copper most prominent as it’s used for the ribbed knitting around the armholes, the slight V-neck opening, and the wide waist hem.

The sweater is detailed with four patterned horizontal bars down the front; the first and third bars are identical, and the second and fourth bars are identical. The first and third patterned bars (located across the top⁠—split by the v-neck⁠—and across DiCaprio’s abdomen) consist of a neat line of brown ovals, each broken up with four teal dots, extending across a copper bar with thin brown stripes bordering the top and bottom. The second and fourth patterned bars (located mid-chest and a few inches above the bottom waist hem) consist of a cream helix “wrapping” around a straight brown center stripe.

Hughes wears the same lilac striped cotton shirt that he had earlier worn with a suit. The shirt, detailed with thin purple and tan stripes on a lilac ground, has a point collar and button cuffs. The film’s unique color treatment makes the shirt appear closer to teal or turquoise, but set photos reveal that the shirt is actually lilac.

With its less frequent patterns, Hughes’ sweater vest isn’t the most traditional example of classic Fair Isle knitting and reflects a more subdued approach consistent with the mogul’s less showy approach to life in general.

It was around the 1930s, particularly following the heat wave during the 1933 U.S. Open, that many men began abandoning some of the unnecessary elements of traditional golf apparel like plus fours and neckties. Though Hughes has discarded the plus fours in favor of more practical flannel trousers, he still wears a four-in-hand necktie, in this case a four-in-hand block-striped in rust brown and mint green, separated by thin stripes in copper, cream, and dark olive, all in the “uphill” direction.

Sunglasses were steadily finding popularity among men and women throughout the 1920s and 1930s, though an aviator like Hughes would have likely embraced the practicality of sunglasses before many of the rest of America adopted them as a fashion accessory. DiCaprio’s Hughes is first seen sporting these vintage gold-framed sunglasses with his navy double-breasted jacket and white slacks when deplaning in the previous scene, wearing them onto the golf course for his sunny day on the links. The rounded lenses recall the retro-inspired Ray-Ban RB3447 “Round Metal” sunglasses, available online from Ray-Ban and from Amazon.

Since their introduction to the United States by the Prince of Wales, plus fours had been favored by golfers over the previous decade for their nonrestrictive fit, but Hughes reserves his breeches for aviation.

However, the fashionably full fit of Hughes’ double reverse-pleated trousers provides him almost the same freedom of movement as those famously baggy breeches while looking less costumed or, as Ian Fleming’s James Bond observed of his titular nemesis in Goldfinger, “an attempt to look smart at golf… as if Goldfinger had gone to his tailor and said, ‘Dress me for golf – you know, like they wear in Scotland.'”

Kate observes the issues with Howard’s form as he swings.

Leonardo DiCaprio’s Howard Hughes fashionably bridges traditional elements of golf apparel like knit sweater vests and neckties with the emerging trends of dressing down for the links, donning more practical flannel trousers and sunglasses as he trades barbs and putts with Katharine Hepburn.

You can read more about historical golf clothing in this article by Sharon Penn for Golfweek.