On the anniversary of Elvis Presley’s death on August 16, 1977, I wanted to celebrate the entertainer’s legacy with a look at one of the singer’s under-celebrated summer films.

I imagine the debate about what to call the movie lasted no more than ten seconds (“What’s Elvis doing in this one?” “Having fun in Acapulco.” “There it is.”) Despite its banal title, Fun in Acapulco indeed lives up to its name as a fast and harmless romp in the sun with the King and some of the era’s most beautiful actresses including Elsa Cárdenas and Ursula Andress, freshly promoted to global icon after her bikini-clad introduction as the shell-collecting, knife-wielding Honey Ryder in the first James Bond film, Dr. No (1962).

Though the entire movie was set in Acapulco, Presley himself never traveled outside the United States for production as riots during his previous openings as well as a racist rumor spread by gossip columnist Federico de León established him as persona non grata in Mexico. Thus, while location filming commenced in Acapulco in January 1963, a double wearing the actor’s costumes stood in as Presley for these scenes, including an establishing shot at La Perla, a famous cliffside eatery known for its scenic views and diving entertainment.

La Perla features as a significant location in Fun in Acapulco, first seen as Presley’s character Mike Windgren escorts Margarita “Maggie” Dauphin (Andress) there for a date, bringing along his young pal Raoul (Larry Domasin). The trio is initially seated at a premium table, but the ghosts of Mike’s circus-performing past haunt him as he gets nervous about being seated so close to the cliffs. Raoul adds to his anxiety by volunteering the aspiring singer to sing for La Perla’s guests so, to honor his date, Mike serenades his fellow diners with “Marguerita”.

By 1960, Elvis had followed the Rat Pack’s lead and firmly established himself as a customer of Sy Devore who was soon tailoring the King in addition to Frank, Dean, Sammy, and their contemporaries. A tailor by trade, Devore wisely expanded his capabilities to match the continuing trend toward informality and was crafting the King’s unique shirts and pullovers alongside the Rat Pack’s signature sharkskin suits and skinny ties.

For an evening at La Perla, Mike dresses in a short-sleeved sport shirt patterned in balanced block stripes of black, gold, brown, and taupe, all with a mottled effect. The flattering shirt has a short length with a hem cut straight across the bottom and fastens with five flat mother-of-pearl two-hole buttons up the plain front to mid-chest, where it gently cuts away to the collar without a button at the top like a subdued variation of the leisure-oriented Lido collar. Each of the short sleeves is notched on the outside, and there is a matching patch pocket over the left breast. Like many of Elvis’ other shirts in Fun in Acapulco, this one was likely made by Sy Devore.

Elvis shows the crowd at La Perla how to stylishly wear a bold-striped shirt, while the patron to the King’s left jealously seethes in his Fruit Stripe gum-inspired button-down.

There has been some lingering lore from the production of Fun in Acapulco that Elvis resented having to wear this particular shirt, feeling uncomfortable performing in something he wouldn’t normally wear (as cited in places like Always Elvis), but he begrudgingly had to wear it as his double had already worn it for the portion of the scene filmed on location at La Perla. As I haven’t seen any primary source material to support these claims, I wonder if Elvis’ actual dispute was regarding how the shirt was worn; perhaps the singer protested having to wear his shirt untucked to look consistent with how the double—who likely didn’t know any better—had worn it.

After all, it’s hard to believe that Presley or the draconian Colonel Tom Parker would not have vetoed a shirt that he didn’t like before it made it far into the production, even if it had been designed by the prolific Edith Head. Plus, Elvis had more eagerly worn an almost identically striped shirt for an earlier scene, albeit a long-sleeved shirt (with the sleeves rolled past his elbows) patterned with a slightly thinner stripe that replaced the black with the green. The only difference is truly that Elvis wore that first green-striped shirt tucked in through the duration of the scene and never had any scenes featuring a double wearing it to mess that up. (A possible rationale is that “Elvis the Pelvis”, who had risen to fame partly from gyrating through his performances, preferred to wear shirts either tucked in or cut even higher on his waist to avoid covering his notorious hips as he performed.) 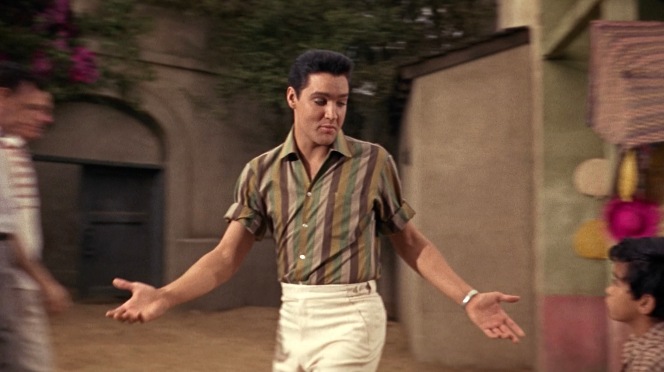 Elvis wears a different block-striped colorway earlier in Fun in Acapulco. Other than the long sleeves rolled up past the elbow and the slightly thinner striping with green substituting black, there’s little difference between this and the “Marguerita” shirt.

The controversially untucked shirt covers the waist section of his cream-colored cotton trousers, fitted around the waist with the self-supporting “DAKS tops” system of button-tab side-adjusters introduced by Simpsons of Piccadilly in the 1930s. Likely also tailored by Sy Devore, these flat front trousers have gently slanted side pockets and button-through back pockets, finished with plain-hemmed bottoms with a high break.

As in Blue Hawaii, Elvis’ character makes the somewhat unseasonal decision to wear plain black shoes and socks with his summery outfits, but at least there is some thematic coordination between his black leather cap-toe derbies and the prominent black stripes of his shirt. (His brown leather loafers and taupe socks as worn with the green-striped shirt may have been a more harmonious choice here as well.)

Without his shirt tucked into his trousers, Mike runs the risk of the “my shirt tails flyin’ all over the place” as he later sings about in “Bossa Nova Baby”.

A noted watch enthusiast, Elvis likely wore one of his own timepieces in Fun in Acapulco, though it isn’t as distinctively identifiable as his Hamilton Ventura from Blue Hawaii. This chronograph has a traditional round stainless bracelet with a black steel dial and a steel expanding bracelet, of which he demonstrates the elasticity in a later scene.

“Margarita, por favor,” Maggie orders at La Perla, to which Mike somewhat densely asks: “He’s asking your name?” “No, silly, margarita is a drink made with tequila,” she responds. “Well, any drink named after you is good enough for me… two margaritas, please!”

It may seem inconceivable to modern audiences that Mike would be unfamiliar with the ubiquitous Margarita… and possibly even more absurd to see how they’re represented on screen as what looks like a shot or two of clear tequila, straight up in a coupe glass with salted rim and straw.

Mike and Maggie enjoy their so-called “margaritas”. That must have been one pure lime to yield such clear juice!

However, the margarita took a little more time to catch on during the 20th century unlike earlier-established classics like the Bloody Mary, Manhattan, and Martini. As with most cocktails, there are competing stories to claim its origins, though it seems evident that this refreshing combination of tequila, triple sec, and lime juice found its footing in Mexico sometime in the 1930s, working its way up opposite sides of the U.S. during the following decade with proven anecdotes in San Diego in 1947 and Galveston, Texas, in 1948.

Margarita: More than a girl’s name announces this Jose Cuervo ad from 1963, the same year that Elvis and Ursula Andress sipped theirs in Fun in Acapulco. Note the recipe calling for two different tequilas, triple sec, and lemon juice.

(According to a legend purported by Mark Bailey in Of All the Gin Joints: Stumbling Through Hollywood History, it was also around this time that tequila aficionado John Wayne was one of the first famous figures to try a margarita while partying at his Acapulco vacation house with Dallas socialites Bill and Margaret “Margarita” Sames.)

It would still take a half-decade before an official Margarita recipe would make its way into print, with the December 1953 issue of Esquire informing readers of their “lovely to look at, exciting, and provocative” drink of the month made from an ounce of tequila, a dash of triple sec, and the juice of half a lemon or lime.

This wasn’t the first mention of the drink in print as Jose Cuervo had been running ad campaigns as early as 1945 that declared “Margarita: More than a girl’s name.” These ads were still running two decades later when screenwriter Allan Weiss riffed on the same concept in Fun in Acapulco with his flirtatious dialogue between Mike and Maggie.

Mike: Margarita… it sounds like it was named after you! Mysterious, intriguing…
Maggie: It’s also sneaky, salty, and dangerous!

The margarita continued to be gradually embraced by the public, finally catching a foothold by the end of the 1960s and into the ’70s as traditional cocktail culture had given way to sweeter and more widely palatable concoctions like the Cosmopolitan, Kamikaze, Long Island Iced Tea, and Margarita. 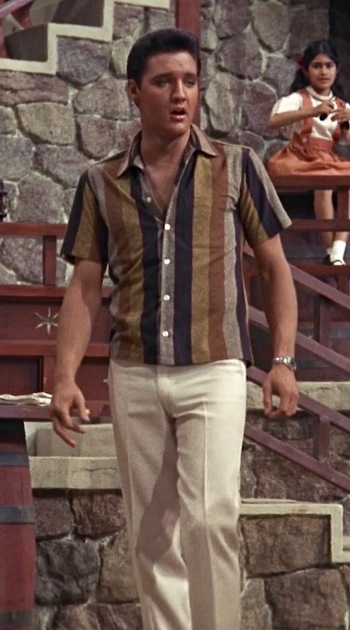 While Elvis Presley may have taken issue with something about this shirt in real life, I think Mike Windgren’s “Marguerita” shirt in Fun in Acapulco is a tasteful and relatively timeless summer shirt, fashionably worn with cream-colored slacks. Both upbeat and offbeat, the shirt showcases enough unique pizazz that it would certainly warrant a place in the King’s wardrobe without being too over-the-top.