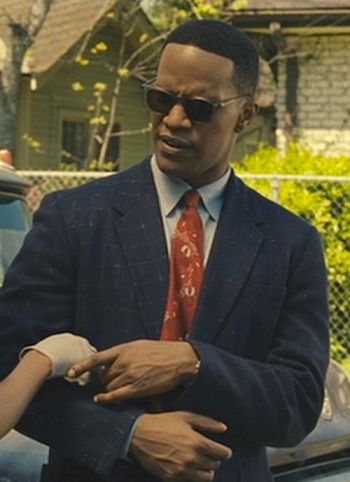 Jamie Foxx became only the second actor in history to receive a Academy Award for Best Actor, BAFTA, Critics’ Choice award, Golden Globe, and Screen Actors Guild award for a single performance when he played Ray Charles. Though it was released five months after the real Ray Charles died of liver disease at age 73, Ray had the blessing of the real Ray Charles who had received – and approved – a braille version of the original shooting script.

Fresh off the success of his first hit for Atlantic Records, the exciting “Mess Around”, we see Ray Charles’ career shooting skyward. He endorses a group called the Cecil Shaw Singers while on-air at a Houston radio station, resulting in a lunch date with the group’s tenor, Della Bea (Kerry Washington), who is amazed that he was able to pick out her voice. END_OF_DOCUMENT_TOKEN_TO_BE_REPLACED

On a suggestion from a great reader of this blog, I revisited Jamie Foxx’s Academy Award-winning performance as Ray Charles in 2004’s Ray and noticed the abundance of excellent period costumes that Foxx wears as the titular virtuoso.

In addition to Foxx’s Oscar for acting, the 2005 Academy Awards also gave a well-deserved nod to costume designer Sharen Davis, who beautifully recreated the era through Ray’s natty attire both on and off the stage. One outfit that particularly stood out was the black satin-trimmed stage suit in blue flecked silk that Ray wears during a couple of early 1960s gigs across the Midwest. END_OF_DOCUMENT_TOKEN_TO_BE_REPLACED