Michael Imperioli as Christopher Moltisani in “D-Girl”, Episode 2.07 of The Sopranos (2000).

“D-Girl” is a turning point episode for Christopher Moltisanti. We had seen previous mentions of his screenwriting aspirations, including a poorly-written script on his Mac in “The Legend of Tennessee Moltisanti”, but “D-Girl” provides his Bugsy moment.

Through a chance meeting with his “civilian” cousin Gregory, Christopher becomes acquainted with his Gregory’s girlfriend, Hollywood studio VP Amy Safir. Amy has been working on developing a mob film with Jon Favreau (who plays himself) and offers Christopher the opportunity to provide input on the film set. After being infuriated by outsiders misunderstanding and elevating the mob status of his friend Brendan, Christopher leaps at his own opportunity to be treated like a made man despite still only technically being an associate in the Soprano crew (rather than a “made” soldier).

Christopher Moltisanti dresses for his meeting with Jon Favreau in a very mobster-evoking outfit with a black-on-black jacket and shirt combination. The jacket is a very distinctive black sport coat.

Although it has the standard welted breast pocket and flapped hip pockets, the most distinctive aspect of the jacket is a zip pocket on the right side. This pocket is higher than the hip pocket, opening just below the point where the elbow hits the side. The zipper has straight black tape with silver teeth and a silver round-ended pull tab that opens toward the rear of the jacket, similar to the pockets on some travel blazers like the Eddie Bauer “Voyager 2.0”, available from Amazon as of October 2019. 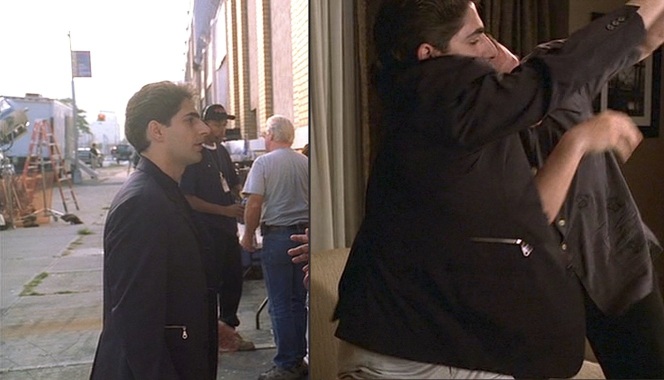 Christopher’s jacket features both standard flapped hip pockets and an additional zip pocket on the right side.

At 5’8″, Michael Imperioli is considered to be average height. Likely aware of this, Christopher would want a more imposing presence, which a jacket with padded shoulders can offer.

Although the “intimidating” effect of the padded shoulders is noticeably reduced when Christopher is begging for another chance with a much taller girl who is already standing a few stairs above him.

Underneath, Christopher wears a black short-sleeve cotton t-shirt with a crew neck. This is an appropriate accompaniment for such a casual sport coat that is obviously not meant to be worn formally with a tie. Also, the black t-shirt under a black jacket creates the “Mafioso” appearance that Christopher has been hired to provide.

Paired with the all-black top is a pair of stone-colored slacks. They are lightweight with a flat front and plain-hemmed bottoms. The front pockets each have a slanted opening, and the jetted rear pockets close through a button. 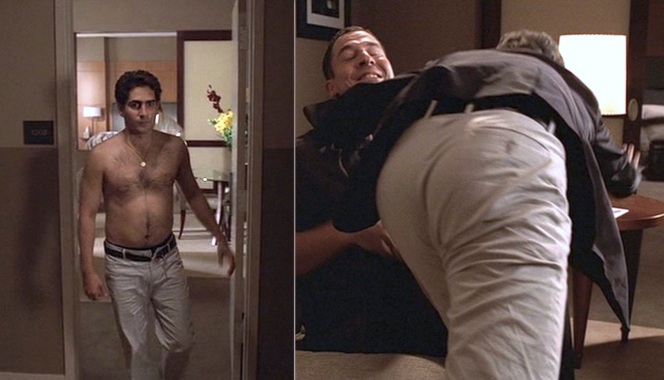 Christopher wears his trousers with a black leather belt that closes in the front through a silver rectangular rounded clasp with a single prong.

Christopher correctly matches the black belt to his usual shoes, a pair of black suede slip-on loafers with short elastic side gussets and black rubber soles. Due to the casual nature of the shoe, Christopher wears them with no socks. He also wears these shoes in the next episode, “Full Leather Jacket”, with a casual light gray suit that was previously covered on this blog.

Christopher’s shoes next to the Joey Gallo script after his tryst with Amy.

On the inside of his right ankle, Christopher wears a simple black holster for his snubnose revolver. This ankle holster is designed for Christopher to reach down over the front of his leg with his right hand to draw the weapon, which is facing butt-forward.

Although many of the show’s gangsters opt for waistband carry, Christopher tends to keep his more compact weapons in an ankle holster.

Christopher continues his black motif even under his clothes, wearing a pair of black silk undershorts with an elastic waistband.

His accessories are relatively few for a mobster, consisting only of his usual gold necklace with the round saint medallion and his watch.

The watch, likely a Rolex DateJust, has a two-tone (silver and gold) mixed metal “Jubilee” link bracelet, a stainless case, and a round yellow gold dial, worn on his left wrist.

Christopher spends much of the episode at what he believes to be a crossroad of his life. While the audience is made painfully aware the entire time that he is destined for a life of gangsterdom, he truly believes that this may be his chance to live his dream as a Hollywood screenwriter. Unfortunately, his simple-minded street mentality and his deep ties to Tony Soprano prevent him from ever truly having a chance of being anything but a Jersey hood.

He blames his frustration on food:

Enough! I am so sick and tired of hearing you people talk about food, food, food! Proscuitto, cheese, and damn fava beans. I’m drowning here!

…although the only honest part of his rant are the last three words.

Christopher pitches his pants tent in the hotel lobby.

Parts of the episode do show an interesting comparison between the mob and the film industry, though. Even small things, like Christopher refusing to quit smoking his Marlboros in the hotel lobby after repeated urging from the concierge, would be characteristic of both a stubborn mobster and an egotistical movie bigshot.

According to IMFDB, Christopher uses a total of at least 13 handguns during the duration of the series; most of which are are only seen one or two times, with the exception of his Glock 19. This frequency is second only to Tony, who uses a total of 16. Many other shows and films give their characters a “weapon of choice”, but in the organized crime world where many of the convicted felons are not permitted to carry guns, a person’s armament is constantly changing based on availability of illegally acquired firearms.

In “D-Girl”, Christopher’s gun-of-the-day is a Smith & Wesson Model 38 “Bodyguard” revolver. The Model 38 is a .38 Special revolver designed as a concealed carry backup weapon that found early favor among bodyguards and plainclothes policemen or agents, hence receiving the “Bodyguard” moniker. It is similar to the Model 36 “Chief’s Special”, a .38 Special snubnose with a five round cylinder, except the Model 38 is fitted with a hammer shroud, concealing the hammer and preventing it from snagging on clothing while drawing it. The shrouded hammer, along with the compact and lightweight frame, make it easily concealed in either a holster or a pocket.

The classic Bodyguard revolver series is comprised of the Model 38, Model 49, Model 638, and Model 649. The Model 38, which Christopher carries, has an aluminum alloy frame and a carbon steel barrel and cylinder that carries five .38 Special rounds. It was originally developed in 1955 as the “Airweight Bodyguard”. When Smith & Wesson began numbering its models in 1957, the Airweight Bodyguard became the Model 38 but retained its “Bodyguard” nickname.

The next entry in the Bodyguard series is the Model 49, which is manufactured totally of carbon steel without the lighter weight alloy frame. Like its predecessor, it has a five-round cylinder for .38 Special ammunition. It was developed in 1959.

Smith & Wesson refreshed the Bodyguard series in 2010 with the introduction of the semi-automatic Smith & Wesson Bodyguard 380 with a lightweight polymer frame. It is double-action-only in the spirit of the classic revolvers, and it has a six-round magazine for .380 ACP ammunition. Smith & Wesson recently introduced the Bodyguard 38, a revolver with a shrouded hammer and five-round .38 Special cylinder, recalling the earlier Model 38. Both Bodyguard variants have an Insight red-dot laser sight integrated into the grip.

Christopher carries his classic alloy-framed Model 38 in a simple black ankle holster on the inside of his right calf. This is shown to be Christopher’s holster of choice on at least four occasions, including the following episode when he carries a Walther PPK in the same location. He irresponsibly taunts Jon Favreau with it when Jon asks him if he is “strapped”.

Christopher Moltisanti is proud to be a gangster, especially when he’s surrounded by Hollywood types in awe of him. He dresses the part when he goes to meet them, putting aside his usual track suits for a black-on-black ensemble instead.