It’s no Hollywood secret that McQ was originally developed as a vehicle for Steve McQueen. Five years after McQueen sat behind the wheel of a hunter green Mustang GT390 careening through the streets of San Francisco in Bullitt, the role of gruff Seattle police lieutenant Lon McHugh was retooled for screen legend John Wayne, who took on his first detective role at the age of 66.

Wayne, whose entire left lung had been surgically removed after a bout with cancer a decade earlier, could only walk short distances without needing oxygen – much to the chagrin of director John Sturges – but still turned in a surprisingly energetic performance as a cop who combines Dirty Harry’s stubborn grit with Bullitt’s propensity toward speeding around the city in a sporty dark green American muscle car.

In McQ, John Wayne sets aside his stockade jacket, silverbelly hat, and cowboy boots for a contemporary and all-American urban casual ensemble of a navy blazer, polo shirt, brown trousers, and loafers.

The dark navy wool blazer has medium-width notch lapels that roll to three plain brass shank buttons on a single-breasted front. There are two smaller non-functioning buttons on each sleeve cuff. The blazer has a welted breast pocket and jetted hip pockets. The shoulders are padded with roped sleeveheads.

With its medium-width lapels and conservative styling, Lieutenant McHugh’s blazer is essentially timeless, with the only possible concession to the era being the extended length of the double vents. The vents may have been cut long to work better with John Wayne’s 6’4″ height.

A similar hopsack blazer was included in a Julien’s Live auction in 2007 (link), though it was incorrectly listed as “worn by John Wayne in ‘McQ’;” the blazer actually worn in McQ has plain brass shank buttons rather than crested silver buttons and does not have patch pockets. The auction does provide some insight into Wayne’s size, as the Western Costume label reads a 46 chest and 19 sleeve.

After foiling an attempt to steal his car, McHugh arrives at work in a navy windbreaker, brown trousers, and royal blue short-sleeve polo shirt. He removes the windbreaker in the police station’s parking garage, replacing it with the more office-appropriate navy blazer.

I can’t confirm the material of McHugh’s polo shirts, but – given the appearance, the era, and some similar vintage items that I own – I would guess that they are made from polyester, nylon, or some other synthetic fiber with stretch properties. The sleeves are elbow-length and the collar is shaped with long points that are enveloped by the blazer.

The blue polo has a long four-button placket with a large “X” stitched inside a rectangle at the bottom. The patch breast pocket has a slim, pointed flap that closes with a small white plastic button that matches the four on the placket.

Later, McHugh wears the same outfit with a similarly styled polo in light yellow. This is the shirt that he wears during the film’s main car chase.

Check out that collar!

McHugh wears dark brown wool flat front trousers with frogmouth front pockets and plain-hemmed bottoms. He wears a black leather belt through the trousers’ wide belt loops, with a black leather holster on his left side that offers him a right-handed cross-draw for his 2″ barreled revolver (he begins carrying his off-duty Smith & Wesson Model 10 after surrendering his backup Colt Python to his superiors.)

McQ confronts his superiors before being forced to turn over yet another of his revolvers.

By the mid-1970s, loafers were the business shoe of choice for many Americans.

John Wayne wears a simple brass Montagnard bracelet on his right wrist, gifted to him by the indiginous Montagnard people of Vietnam during the filming of The Green Berets in 1968. Modern Forces Living History Group reports that many American servicemen returned from Vietnam with these bracelets from the tribe, signifying friendship or respect. Manready Mercantile offers a striking replica of the “Montagnard Bracelet” in brass, copper, or steel (link), where they explain that “not only did Duke don the bracelet on his wrist until the day he passed, it’s said he lays with it to this day.”

McQ flashes his bracelet and watch while bracing a drug pusher.

On his left wrist, McHugh wears a gold chronograph on an olive drab vinyl strap, worn in the same manner as many military or ex-military operators with the face on the inside of his wrist. The silver dial has three sub-dials. 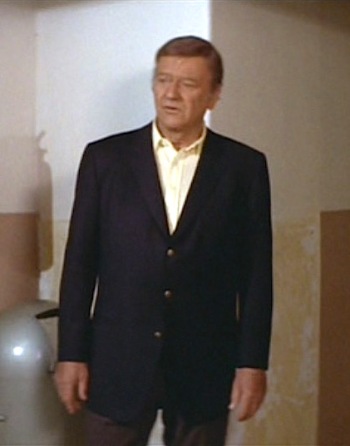 John Wayne brings sensibilities of traditional style to his role as urban cop Lon McHugh, sticking to a base outfit of navy blazer and bright-colored polo with brown trousers and slip-ons.

Tough cops in this era seemed to have an affinity for dark green American muscle cars. In McQ, John Wayne drives a 1973 Pontiac Firebird Trans Am in the somewhat rare color of Brewster Green.

Due to his height and reduced agility, John Wayne reportedly had to enter McQ’s Trans Am by sliding in with his right leg first while tilting to the left to allow room for his entire 6’4″ frame. When he first gets in the car to pursue the laundry truck after the drug heist, he tries to enter head first, an attempt which was undoubtedly foiled by the car’s relatively limiting 37.5-inch headroom (more than half the size of John Wayne’s height).

McQ stops by the side of the road in his Trans Am.

The second generation of the Pontiac Firebird, produced from 1970 to 1981, continued to share GM’s F-body platform with the Chevy Camaro, but only Pontiac offered the massive 7.5 L big block engine during this generation. (Chevrolet had planned to include a 454 V8 in this generation’s Camaro, but this concept never extended beyond technical manuals.)

The 1973 model year saw the introduction of the Super Duty 455 (SD-455) V8 engine, rated at 290 SAE net horsepower. The only other available option was the standard 455 cubic-inch V8. According to contemporary tests in Hot Rod, a standard 455-equipped T/A could complete a quarter mile in 13.5 seconds with a top speed of 104 mph. 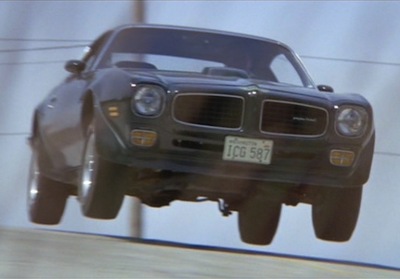 All 1973 Firebirds, from the 250 cubic-inch six-cylinder base model up to the top Trans Am performance model, came standard with a manual transmission with GM’s Hydra-matic automatic transmission available as an option across the board. An observant commentor at IMCDB notes that the sound of McQ’s Pontiac in lower gears sounds more like the Borg Warner Super T-10 transmission rather than the louder Muncie M-22, which GM discontinued in early 1973.

At least two different Trans Ams appear to have been used during the production of McQ, one with a license plate of ICG 587 (seen above) and another registered as BRN 952 (seen below).

Note the BRN 952 license plate on this Trans Am.

If you’ve got $150,000 to spare, you can pick up your own pristine 1973 Pontiac Trans Am in Brewster Green from this Tennessee seller… and this one is even loaded with the high-performance SD-455 V8!

Police officers were still primarily armed with revolvers in the 1970s, and Lieutenant McHugh cycles through three distinct ones in the film’s earlier half; all three are eventually taken by his superiors over the course of the movie. He begins with a full-length Colt Python and a snub-nose Colt Python, the latter of which he wears in his belt holster.

After both Pythons are surrendered to his bosses, McHugh arms himself with his off-duty piece, a Smith & Wesson Model 10 with a 2″ barrel. Chambered in .38 Special, the 2″-barreled Model 10 is the prototypical “belly gun” favored by gangsters and cops in old movies. Smith & Wesson developed the five-shot “Chiefs Special” Model 36 for just that purpose in 1950, but the larger-framed Model 10 “Military & Police” with its six-shot capacity is a better fit for a big guy like John Wayne.

(It’s worth noting that the Seattle Police Department actually issued the Smith & Wesson Model 10-2, albeit with the standard 4″ barrel, to all officers from 1962 to 1995.)

The force created from a .38 Special going off inside the close quarters of a Pontiac Trans Am would surely be enough to deafen. Luckily, John Wayne practices smart trigger safety.

After his superiors take away his third revolver in a row, McHugh decides that he’s mad as hell and not gonna take it anymore. He heads to a gun store and picks up a Browning Hi-Power, followed by a suppressed MAC-10 that he uses to great effect during the film’s climax.

Not your typical day at the shooting range…