The turning point in Clyde Barrow and Bonnie Parker’s criminal career came on Easter Sunday, April 1, 1934. The couple was sitting inside their Ford V8 on a dusty road outside Grapevine, Texas, with their latest recruit, a shifty young son of Louisiana named Henry Methvin. Two months earlier, Clyde was in command of the closest thing he’d ever had to a “gang”, though the few criminal members with any experience quickly disassociated from the trigger-happy amateur, leaving only Clyde, Henry, and Bonnie making up the ranks of “The Barrow Gang”.

With at least nine murders to their name by that point, the gang had only Bonnie to credit for any enduring popularity they may have maintained. Contemporaries like John Dillinger and “Pretty Boy” Floyd were regarded, for better or worse, as Robin Hood-like folk heroes during the desperate days of the Great Depression, with reputations for their manners, wit, and successful bank heists. Clyde Barrow, on the other hand, was hardly more than an insecure stickup artists with a lead foot, an eager trigger finger, and a string of excessively good luck to get him out of two years worth of sticky situations. Bonnie Parker’s willingness to remain by his side was Clyde’s greatest stroke of luck, as the mere fact that she was a woman gave the public a reason to root for the Barrow Gang.

Formerly Mrs. Roy Thornton of Dallas, Bonnie Parker was hardly the type that her family or friends would have expected to become forever synonymous with crime. Bonnie was married by the time she was 16, but her good-for-nothing husband was either in jail or away from home for the next three years. For Miss Parker, loneliness was far worse than larceny, and she followed the romantic impulses that led her to devoting her life to the sociopathic Clyde Barrow in the spring of 1930. 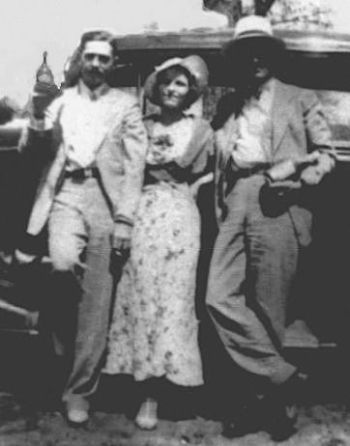 Fast forward four years to that dusty Easter Sunday outside Grapevine. Wanted by the police but esteemed by the general public, Bonnie and Clyde have become legends in their own time, their names synonymous with sex and danger. Waiting for a fourth associate to arrive, the trio idled away the hours of the early afternoon by napping, passing a bottle of Black & White whisky, and playing with Sonny Boy, a rabbit that Bonnie plans on gifting to her mother for Easter.

Farther up State Highway 114, Texas Highway Patrol officers H.D. Murphy, 22, and E.B. Wheeler, 26, have split off from a third patrolman to investigate a black Ford V8 with yellow wheels parked by the side of the road. The occupants were no strangers to the sight of police approaching, and Clyde Barrow – for all of his faults – had tried to make a habit of kidnapping, disarming, and releasing his uniformed enemies rather than murdering them outright. A sawed-off shotgun in his hand, Clyde turned to the youthful Henry and announced their plan: “Let’s take ’em.”

For the sake of the two approaching officers, Clyde should have been more specific. The inebriated and inexperienced Henry turned and raised his Browning Automatic Rifle, firing a fatal .30-06 round into Wheeler’s chest at point-blank range. Murphy, not expecting danger, fumbled for the shells in his pocket to load his shotgun, but Clyde had now joined the fracas and takes down the younger officer with his own shotgun.

It’s over within seconds, with Clyde’s Ford kicking up dust, leaving only the two dying or dead officers near their motorcycles with spent rounds and a discarded – and clearly fingerprinted – bottle of Scotch littering the scene. (To read more about the incident and see the whiskey bottle itself, check out this page from Bonnie & Clyde’s Texas Hideout.)

Thus began the wave of public sentiment finally turning against the Barrow Gang. Bonnie, for all intents and purposes the gang’s PR agent, was powerless against the fact that her boyfriend was part of a double murder on Easter. (It wasn’t the gang’s first killing on a religious holiday; on Christmas 1932, Clyde had killed a civilian named Doyle Johnson while stealing his Ford in Temple, Texas. This was before the gang was famous, so the egregious crime went underreported in the press.) In fact, “eyewitness” reports were even starting to put a gun in Bonnie’s hands, and a story emerged that she clenched a cigar as she fired into a helpless officer before maniacally laughing and crying out: “His head bounced just like a rubber ball!”

Of course, Bonnie was still badly burned from a car accident nine months prior and could barely stand, let alone hold her own in a gunfight, not to mention that this type of sadistic murder would be wholly uncharacteristic for her… despite her loyalty to a man who was more than capable of murder. Nevertheless, she became as hunted as Clyde, violently dying by his side less than two months later on a quiet Louisiana country road on the morning of May 23, 1934.

The 2013 miniseries Bonnie and Clyde, for all of its deviations from historical record, is one of the few pieces of Barrow-related pop culture to depict the double murders at Grapevine. The incident is directly at odds with the more romantic image propagated by the popular 1967 film starring Warren Beatty and Faye Dunaway.

Emile Hirsch, swimming in his suits like a child who raided his dad’s closet, communicates a great deal about his subtle and swagger-free characterization of Clyde Barrow, giving the audience a better sense of the character’s inadequacies and somewhat justified insecurities than the sight of a strapping 6’2″ Warren Beatty in his handsome, well-cut suits. (Interestingly, both Hirsch and the real Clyde stood at 5’7″ tall.)

It’s perhaps appropriate to feature this oversized suit on April Fools’ Day, as Clyde hardly looks as dapper as he would have liked. Of course, in 1934 – and in 2018 – April Fools’ Day was also Easter Sunday, so Clyde is dressed in his Sunday best for dual family visits with both the Barrow and Parker clans. (Another point in favor of the miniseries’ historical accuracy; unlike the sole visit to “Mother Parker” in the 1967 film, Bonnie and Clyde did manage to sneak back to Texas on several occasions to meet with their families over the course of their two-year spree.)

Clyde’s wool suiting is light brown with tan shadow stripes. The single-breasted, two-button jacket has wide notch lapels, a welted breast pocket, and straight jetted hip pockets. The sleeveheads are roped at the shoulders, the back is ventless, and there are three buttons on the end of each sleeve.

Clyde: “She’s in a lot of pain.”
Cumie: “Pretty sure the two of you [have] given a lot more than you’ve gotten.”
Mothers always know just what to say… though, given what Clyde’s crimes have put his mother Cumie (Dale Dickey) through, I can’t say I blame her for the honesty.

The flat front suit trousers have tall belt loops, slanted side pockets, and back pockets with openings just below the belt, one of the thick black leather belts with a large squared steel single-prong buckle similar to those that Clyde Barrow was known to prefer in real life. The suit’s baggy fit is evidently in the very full break of the trousers, which have plain-hemmed bottoms though there appears to be a crease for cuffs. Clyde wears his usual black leather cap-toe derby shoes, matching his belt.

Clyde tenses up behind the wheel when the couple is confronted by two Texas Highway Patrol officers.

Clyde’s maroon tie has a motif of pale yellow diamonds, tied in a Windsor knot and flaring out to a period-correct wide blade.

Clyde takes in his mother’s words during a foggy Easter reunion.

Worn open throughout the scene is a darker brown tonal-striped waistcoat (vest) with a single-breasted front with five dark sew-through buttons, four slim-welted pockets, and a light brown corded back lining that cinches with an adjustable strap.

The odd vest (in a sartorial context, “odd” refers only to the fact that it doesn’t match the suit) serves a practical purpose of giving Clyde an unobtrusive layer that can cover his sidearm while he hops in and out of his undeniably hot car in the days before air conditioning. 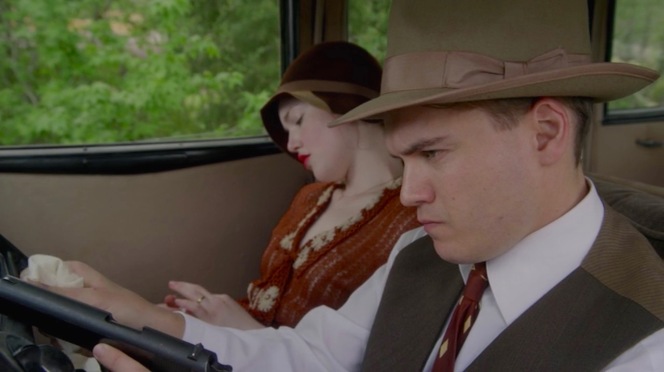 Note the subtle tonal stripes on the waistcoat and the thicker corded back.

Clyde tops off the look with a tan felt fedora with a pinched crown and tan grosgrain band and edges.

Clyde Barrow may be a remorseless criminal, but even he thinks to dress in his finest for a family visit on Easter Sunday. Emile Hirsch’s Clyde opts for the warmth of an earth tone-centric outfit, though the bagginess could suggest that he’s more appropriately suited for April Fools’ Day… which may or may not be coincidentally concurrent.

What’s Easter without a discussion of classic firearms?

It’s generally agreed that Clyde Barrow’s preferred sidearm was the 1911-series semi-automatic pistol that Colt had been producing for the U.S. military for more than two decades. Originally chambered for the powerful .45 ACP round, the .38 Super round was introduced in 1929 as a high-pressure alternative that could penetrate the body armor and bulletproof vests often worn by gangsters. The .38 Super never gained much traction in the law enforcement community, but gangsters like John Dillinger and “Baby Face” Nelson were known to make use of this deadly round.

Bonnie and Clyde miniseries correctly arms Clyde with a 1911-series pistol, though it’s the anachronistic Colt Mk IV Series 70 rather than an original M1911 or M1911A1 that would’ve been available during the Barrow Gang’s stint in the early 1930s. 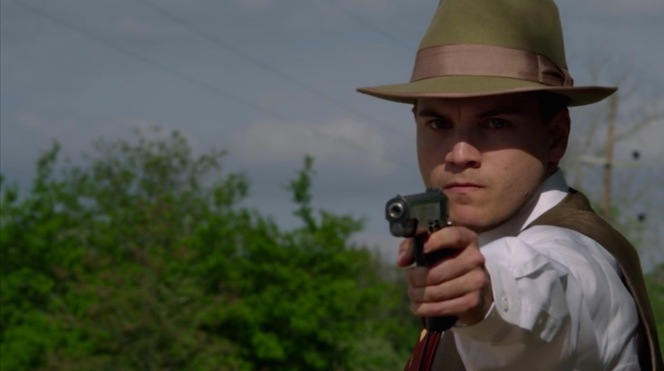 All that aside, it’s also been confirmed that the weapons used during the Grapevine killings were a sawed-off shotgun (in Clyde’s hands) and a Browning Automatic Rifle (used by Henry Methvin).

Check out the series and visit Frank Ballinger’s Bonnie & Clyde’s Hideout site. (It’s on Netflix, too!)

William Schieffer, a local farmer, said he witnessed the killings from his land which overlooked the hill where Wheeler and Murphy were killed. He often changed his story from seeing the killings at a distance to up close, but his most famous claim was  that Bonnie turned Murphy over on her foot and shot him again point-blank, saying: “Look-a there, his head bounced just like a rubber ball.” Interestingly, both Schieffer and his erroneous depiction of the murders was adapted for inclusion in the miniseries.

Schieffer’s claim was later proven fraudulent after he identified one-time Barrow accomplice Floyd Hamilton and Billie Parker, Bonnie’s sister, as the killers. He would later admit to having made up the story, seeking publicity and reward money.