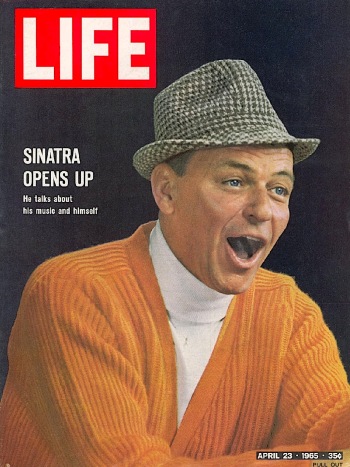 Frank Sinatra, photographed for the April 23, 1965 cover of LIFE magazine by John Dominis. The same cardigan would appear in Marriage on the Rocks (1965), released five months later.

On this #SinatraSaturday, we celebrate the famous singer’s favorite color by commemorating his appearance on the cover of LIFE magazine 55 years ago this week when he was photographed by John Dominis in an orange cardigan, white turtleneck, and houndstooth trilby for a cover story titled “Sinatra Opens Up”.

Around the same time, Frank Sinatra was filming the amusing ’60s romp Marriage on the Rocks with his friends and occasional co-stars Dean Martin and Deborah Kerr. The movie also provided Nancy Sinatra with her first opportunity to act opposite her father, playing his daughter on-screen as well. (The original title was Divorce American Style until Cy Howard’s original screenplay was deemed too offensive, resulting in rewrites under the title Community Property before all settled on the Rat Pack-friendly title Marriage on the Rocks.)

Sinatra stars as Dan Edwards, a career-focused ad man whose marriage is on the proverbial rocks due tot he lack of passion he’s put into his 19 years with the vivacious Valerie (Kerr). His best pal and business partner is the smooth playboy Ernie Brewer (Dino, of course), who envies the security of Dan’s home life… though not enough to voluntarily give up his swinging bachelor lifestyle with what Dan describes as “the best collection of dames in town!”

Mix-ups and misunderstandings during Dan and Val’s attempt at a second honeymoon in Mexico results in a quickie divorce and even quicker marriage that finds Valerie now legally wed to Ernie, much to the avowed bachelor’s dismay. Dan, fed up with the drama in his previous life, welcomes the freedom from responsibility that comes with assuming Ernie’s bachelor lifestyle, complete with a beachfront pad and bevies of broads.

“Orange, he adored,” writes Bill Zehme in The Way You Wear Your Hat: Frank Sinatra and the Lost Art of Livin’. “‘Orange is the happiest color,’ he said whenever he saw it. His homes and offices and airplane interiors were awash in it. Orange birds of paradise filled flower vases everywhere around him. He loved to wear orange sweaters, orange bathing trunks, orange sport shirts, and orange oxford-cloth shirts.”

After spending much of Marriage on the Rocks in shades of gray flannel suits, Dan Edwards is finally given the chance to live a life without the responsibilities of work and home that have kept him so buttoned-up. Frank Sinatra himself undoubtedly had a hand in choosing Dan’s wardrobe for his “liberation”, wearing several orange pieces that signify the unbridled happiness of Dan’s brief foray into relative freedom as a bachelor.

The most prominently seen is a soft orange ribbed knit wool cardigan with six flat white sew-through buttons up the front, a straight-cut hem, and long raglan sleeves that Sinatra folds back once at each cuff. There are square patch pockets on the hips, each reinforced with a non-ribbed strip across the top.

Five months before Marriage on the Rocks was released, LIFE magazine readers would have seen Ol’ Blue Eyes wearing the same sweater on the cover of the April 23, 1965, issue as photographed by John Dominis. For this photo shoot, Sinatra wore the cardigan over a white lightweight thinly ribbed turtleneck sweater with a brown-and-beige houndstooth tweed trilby.

An additional shot from the Dominis photo shoot.

In Marriage on the Rocks, Sinatra’s Dan Edwards wears the singer’s own orange cardigan for the brief vignette set in Ernie’s beach house when Ernie himself swings by to get a glimpse of his old pal living the bachelor lifestyle. Dan wears the cardigan over an ecru cotton shirt with a plain front and point collar, worn open at the neck.

“No married men allowed!”
Dan refuses to admit Ernie—or at least any more than Ernie’s forearm—into his own home.

Dan moves back over to the fire pit to take a seat among the trio of beauties joining him that fall evening, and we see that he’s wearing copper brown flat front trousers, one of the few pieces of warm-toned clothing in the ad man’s otherwise conservative wardrobe. The trousers likely have side-adjusters, either buttons or buckle-tabs, as well as on-seam side pockets and plain-hemmed bottoms that slightly flare out over his black leather loafers and black ribbed socks.

A quiet night in for Dan and his dates.

The cardigan isn’t the last we see of “liberated” Dan’s orange wardrobe in Marriage on the Rocks. When Ernie agrees to accompany Val to the Cafe a Go-Go, the erstwhile Mrs. Edwards is horrified to see her ex-husband dancing with his new girlfriend Lisa (Davey Davison) in the cage he had once derided. Dan wears a pale yellow double-cuff shirt and black tie under his orange single-breasted, three-button sports coat with welted breast pocket, straight flapped hip pockets, two-button cuffs, and double vents that gave Ol’ Blue Eyes a little more mobility as he kept his jacket fastened at the center button throughout his, er, performance.

Sinatra may not sing in Marriage on the Rocks, but he still dances!

The next time we see Dan, he’s dropping his young son David (Michael Petit) off with his mother for Thanksgiving dinner. Sitting at the wheel of his four-door Lincoln Continental convertible, Dan looks cool and casual in an orange two-button polo shirt with the collar worn over the short standing collar of his tobacco brown suede jacket.

Behind-the-scenes photography of Sinatra with George Barris, who had designed the custom zebra-striped Mustang driven by Tracy’s boyfriend Jim (Tony Bill), shows that the jacket has side pockets and a touch of elasticity on the side hems. He wears brown trousers and brown leather shoes with this outfit.

Dan’s final dash of on-screen orange comes by way of a polo worn during Marriage on the Rocks‘ final act.

Sinatra wears his usual gold signet ring on his left pinky and a gold tank-style watch with a black leather strap on the same wrist.

Frank Sinatra as Dan Edwards in Marriage on the Rocks (1965)

Given his love for orange, Frank Sinatra would no doubt bless any way that this bold color was injected into one’s wardrobe to signify happiness, though the cardigan he wore for John Dominis’ LIFE magazine cover shoot and his subsequent appearance in Marriage on the Rocks is a comfortable place to start.

Orange knitwear isn’t the most popular menswear offering at the moment so, aside from a few retailers like Uniqlo with this now out-of-stock (as of April 2020) lambswool cardigan, your best bet would be to seek out something vintage. I spotted a few reasonably priced examples on eBay from Huntley of York, Izod, Sears, and United Colors of Benetton, all produced between the 1960s and 1990s.

Check out the movie. Sinatra sartorialists would also be well-advised to check out Bill Zehme’s volume The Way You Wear Your Hat: Frank Sinatra and the Lost Art of Livin’, and I remain eternally grateful to BAMF Style reader Teeritz for providing my own copy several years ago.