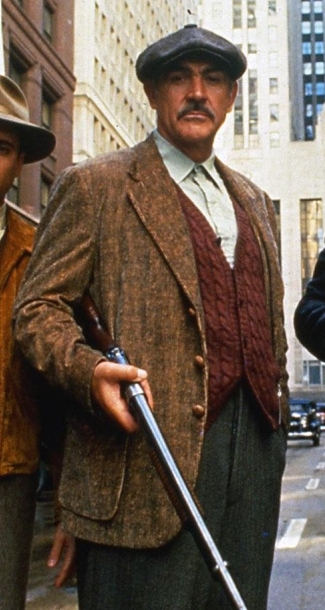 Sean Connery as Jim Malone in The Untouchables (1987)

The Untouchables is a highly entertaining⁠—yet highly fictionalized⁠—saga of the successful legal campaign to bring down Al Capone’s criminal enterprise that terrorized Chicago through the 1920s with an all-star cast including Robert De Niro as Capone himself.

Eliot Ness had made a name for himself in the final years of Chicago’s beer wars as a relentless Prohibition agent, and he would use his fame decades later to pen The Untouchables, a memoir in which he credits himself with practically single-handedly sending Capone to prison. In real life, Ness’ raids were indeed disruptive, but it was the work of modest investigators U.S. Attorney George E.Q. Johnson and IRS agent Frank Wilson that eventually led to the charges that successfully convicted Capone. END_OF_DOCUMENT_TOKEN_TO_BE_REPLACED