The Thomas Crown Affair is one film where I would feel comfortable ruling that the style outweighs the substance. In some ways, the plot reads like a harlequin novel – a dashing millionaire is investigated by an impossibly stunning insurance investigator and the two play a cat-and-mouse game, culminating in some symbolism-driven sex and his eventual escape. It is a simple plot in a film best remembered for its lavish touches across the board from cinematography to costuming.

In fact, Crown himself is far more sophisticated than the plot. Watching for plot can be more than mildly frustrating as the film really electrifies when McQueen and Dunaway are onscreen and – not the fault of the other actors – stumbles when neither are there to save it. The film is still a fun and very ’60s caper, but it’s important to keep in mind that the focus is totally on style.

Of course, this is exceedingly appropriate for a man whose surface persona – rich, well-suited, and conducting business from a grand skyscraper office – helps conceal the fact that he’s a devil-may-care criminal at heart, robbing banks on a whim simply to increase his already vast fortune. Ayn Rand would be proud.

Crown wears a medium brown semi-solid three-piece suit for a few brief scenes in the film. Brown is not a traditional color for an urbanite like Crown, but McQueen has a pretty solid track record for brown-heavy attire so he makes the look work in his favor. The suiting is likely a mohair blend based on its sheen and the fabric’s reputation for expensive luxury that would be very fitting for the debonair Thomas Crown.

Douglas Hayward, the legendary Savile Row tailor, crafted McQueen’s suits for the film, keeping each suit’s styling and fit relatively consistent while providing a variety of looks that each match with what we know about Crown and his personality.

For instance, he’s the sort of person who keeps a giant globe in his office.

The single-breasted jacket has reasonably slim notch lapels that roll down to a two-button front. The welted breast pocket is never without a pocket square (blue silk in the first scene, mustard gold silk in the second), and there are straight flapped pockets on each hip.

Hayward’s sartorial touches from the other suits are present here also, such as the fishtail-styled single-button cuffs and the double side vents. Natural shoulders with roped sleeveheads, a suppressed waist, and voluminous back all work together to strengthen McQueen’s athletic silhouette and still allow him room to move within the jacket. 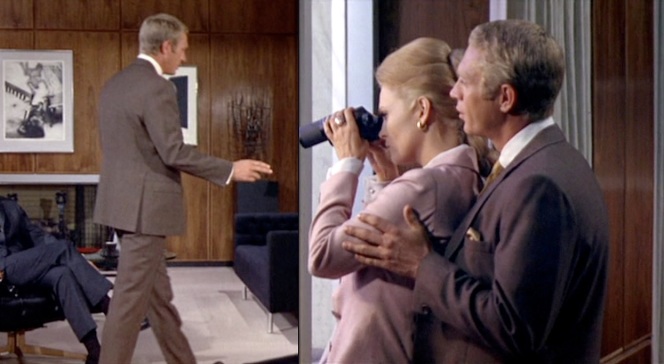 Crown in his office, conducting a few different types of business.

The straight-cut waistcoat from Crown’s other suits returns, recalling spies of the era like James Bond in Thunderball and Maxwell Smart. The vest is single-breasted with five widely-spaced horn buttons and very slim lapels that echo the suit jacket.

Showing up again after its prominent appearance in the first scene is Crown’s gold Patek Philippe pocket watch, which he wears in the left of the waistcoat’s two welted pockets. The watch is worn on a thick gold chain and attached, “double Albert”-style, through the fourth button of the vest with a Phi Beta Kappa fraternity key fob drop. As I commented in an earlier post, Crown would be a chapter brother of Daniel Webster and Nelson Rockefeller as a Dartmouth-graduated Phi Beta Kappa. 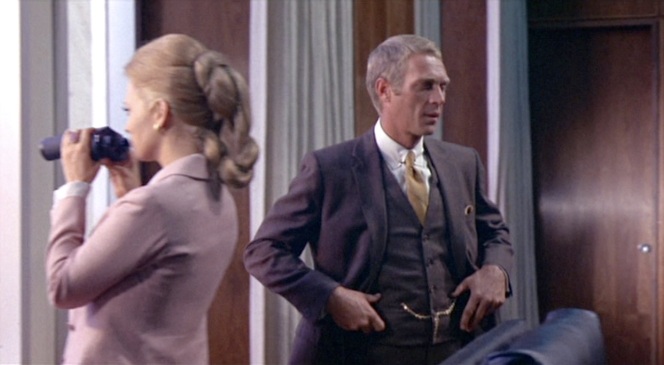 Everyone knows that vest-wearers are just wasting their time if they’re not occasionally swinging their jacket back with both hands to hook their thumbs in the pockets.

Crown’s trousers rise high on his waist with flat fronts and a straight fly that continues the vertical center line from the vest. The high rise and straight leg offer a full, clean look down to the plain-hemmed bottoms. The straight, high cut of the waistcoat enhances the trouser length and makes McQueen look even taller than 5’10”.

As his suits all have a simple elegance without many frills, I am led to deduce that he foregoes both suspenders and a belt and instead either has side adjusters or, more likely, his trousers are fitted to his waist.

Crown is always certain to incorporate earth tones into his shirt and/or tie when wearing this suit. His first shirt, when discussing asset liquidation in his office, is pale yellow with the slim collar pinned under a dark olive brown silk tie.

Next, when Crown is entertaining Vicki Anderson in his office, he wears a light cream cotton shirt. The collar is again fastened with a large silver pin. He now wears a slim mustard gold silk tie with faint, spotted diagonal dark brown stripes dotting down from the right shoulder toward the left hip. His solid mustard gold pocket square, puffed into a single soft point, nicely matches the tie. 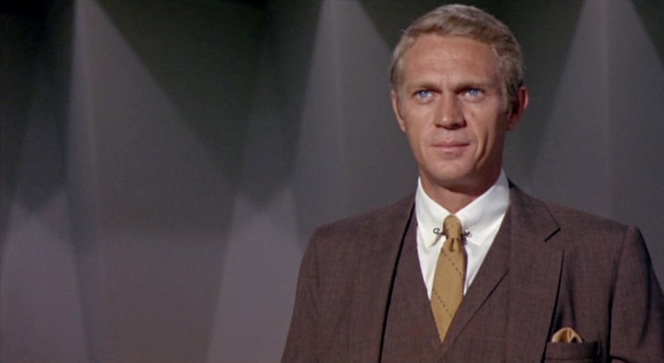 We never see the cuffs of either shirt, aside from half an inch poking out under the suit jacket’s sleeves, but they are likely double cuffs. Given Crown’s propensity for matching, the cuff links are probably some gold-toned affairs. (A production photo of McQueen – used above – reveals a little more of the cream shirt’s cuff, and small gold cuff links can be spotted.)

When he and Vicki take their pleasant walk through a cemetery (like you do), we see Crown’s dark brown leather plain-toe monk strap loafers. Monk strap loafers have a full cut that typically conceals the socks, but they are likely dark brown also as anything else would just draw an odd contrast. 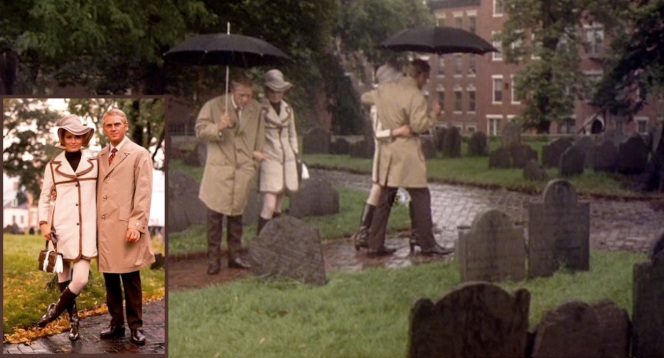 Steve and Faye taking a stroll.

Since it is raining, he also wears a short khaki raincoat that extends to his thighs. The raincoat, a classic McQueen garment, is single-breasted with three front buttons and hip pockets. The sleeves are cuffed with two buttons to fasten. It is a very simple garment without extra flaps, sashes, or additional outer pockets.

A behind-the-scenes production photo shows Crown wearing a red patterned silk tie with a spread collar shirt during the cemetery walk. The shirt appears to be cream and the tie has orange dots, so this doesn’t betray Crown’s personal (but by no means universal) earth tones-with-a-brown-suit rule.

McQueen is one of the few guys who can wear an all-brown suit, earth tones in his shirt and tie, and still not blend in when pacing around his wood-paneled office.