One of the most pivotal moments in the early seasons of Cheers was Sam and Diane setting “will they or won’t they?” by getting together in the final seconds of the first season finale… then picking up abruptly in the second season premiere with their attempts at coupling that prove the fledgling relationship may already be doomed.

END_OF_DOCUMENT_TOKEN_TO_BE_REPLACED

Today marks the 50th anniversary of the release of The Thomas Crown Affair, Norman Jewison’s stylish 1968 thriller starring Steve McQueen as the titular mastermind who finds himself in a passionate cat-and-mouse game opposite a glamorous insurance investigator played by Faye Dunaway.

Steve McQueen sports Thomas Crown’s navy suits all over Boston, proudly wearing them for his adventures by land, sea, and air… END_OF_DOCUMENT_TOKEN_TO_BE_REPLACED

Jack Nicholson as Francis “Frank” Costello in The Departed (2006)

To celebrate Jack Nicholson’s 80th birthday today, April 22, BAMF Style is looking at an iconic role from his latter career as crime boss Francis “Frank” Costello in The Departed. Nicholson reportedly wanted “a little something more” for his character*, and elements of real-life Boston mobster Whitey Bulger were incorporated into Jack’s eccentric and erratic character.

This brief but memorable scene, featuring Nicholson in some timely springtime pastels, was filmed June 28, 2005 at the Long Wharf in Boston. Two of Massachusetts’ finest, Captain Queenan (Martin Sheen) and Sergeant Dignam (Mark Wahlberg), are monitoring Costello’s movements and decide to show their face. END_OF_DOCUMENT_TOKEN_TO_BE_REPLACED

Norman Reedus and Sean Patrick Flanery as the MacManus Brothers in The Boondock Saints (1999).

For most of us, St. Patrick’s Day is a celebration full of green beer, corned beef, and bad decisions. For the MacManus brothers, two cheeky but religious meat packers in South Boston, it usually means the same thing. Even Murphy MacManus uses the holiday to welcome a trio Russian mobsters to the neighborhood bar:

Yeah, it’s St. Paddy’s Day, everyone’s Irish tonight. Why don’t you just pull up a stool and have a drink with us?

Unfortunately, the Russkies aren’t as willing to throw a few back and celebrate, so the holiday leads to an eruption of violence that evolves the MacManus brothers into “The Boondock Saints”. END_OF_DOCUMENT_TOKEN_TO_BE_REPLACED

In an edgy move given the city’s recent history, The Thomas Crown Affair‘s soundtrack composer Michel Legrand named a track from the album “The Boston Wrangler”*. The track in question centers around a brief two minute scene where Crown, under heavy surveillance at his home, manages to sneak out and incapacitate a guard, all while cheekily puffing away on a stogie. I’m not sure if there was any initial blowback from the track’s name, but the instrumental itself is a fine example of the jazzy ’60s cool that defined the movie’s style.

* In case you’re not a criminal history person, the track’s title is a pun on the “Boston Strangler”, a serial killer who had recently been convicted for multiple murders.

Although he’s as dapper as they come in his three-piece suits, Crown is no stranger to casual attire when it comes to non-business activities. When it comes to sneaking around at night, Crown avoids his genre contemporary James Bond’s poor choice of wearing all black and opts for shades of blue to better blend in with the night. END_OF_DOCUMENT_TOKEN_TO_BE_REPLACED

The Thomas Crown Affair is one film where I would feel comfortable ruling that the style outweighs the substance. In some ways, the plot reads like a harlequin novel – a dashing millionaire is investigated by an impossibly stunning insurance investigator and the two play a cat-and-mouse game, culminating in some symbolism-driven sex and his eventual escape. It is a simple plot in a film best remembered for its lavish touches across the board from cinematography to costuming.

In fact, Crown himself is far more sophisticated than the plot. Watching for plot can be more than mildly frustrating as the film really electrifies when McQueen and Dunaway are onscreen and – not the fault of the other actors – stumbles when neither are there to save it. The film is still a fun and very ’60s caper, but it’s important to keep in mind that the focus is totally on style. END_OF_DOCUMENT_TOKEN_TO_BE_REPLACED

With Easter nearly here and spring finally taking over after a long winter, some men may be looking to incorporate more color into their wardrobe.

Thanks to films like The Great Escape, The Sand Pebbles, and – most recently – Bullitt, Steve McQueen was at the top of the Hollywood game in 1968. He was already popular enough to be demanding about his roles, and his reputation for difficulty just enhanced the “bad boy” status he was cultivating. END_OF_DOCUMENT_TOKEN_TO_BE_REPLACED 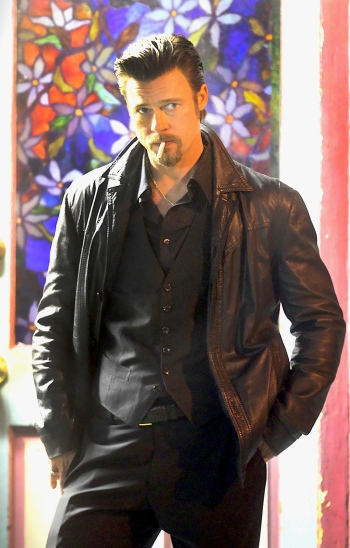 Brad Pitt as Jackie Cogan in Killing Them Softly (2012)

* The movie – like the source novel – was indeed set in the Boston area but was filmed in New Orleans.

Although it met with mixed reviews, fans of George V. Higgins appreciate the recent film version of his 1974 book Cogan’s Trade, released as Killing Them Softly based on a line from the novel’s titular protagonist, Jackie Cogan:

They cry. They plead. They beg. They piss themselves. They call for their mothers. It gets embarrassing. I like to kill ’em softly, from a distance. Not close enough for feelings. Don’t like feelings. Don’t want to think about them.

END_OF_DOCUMENT_TOKEN_TO_BE_REPLACED

Last Friday would have been Steve McQueen’s 83rd birthday. To celebrate Steve and honor an early request from a BAMF Style follower…

Steve McQueen was racking up several iconic tough guy looks by 1968, with both The Great Escape and Bullitt under his belt. Now, as millionaire playboy Thomas Crown, he would be playing more of a romantic lead and would need the wardrobe to match. END_OF_DOCUMENT_TOKEN_TO_BE_REPLACED