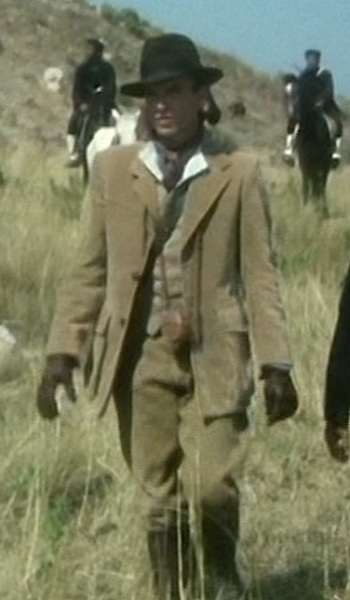 Today’s Throwback Tuesday installment throws us all the way back to February 1904 on the eve of the Russo-Japanese War. According to Reilly: Ace of Spies, the newly minted Sidney Reilly is stationed in Port Arthur, Manchuria, ostensibly under the cover of a shipping agent but secretly working with the Japanese military developing their plans for a sneak attack to take the port away from the Russians. Reilly is shown to be a cold pragmatist, working with Japan against his better judgement and dispassionate regarding his poor wife, Margaret (Jeananne Crowley), whom he had married three years earlier after the mysterious* death of her clergic husband.

* Reverend Hugh Thomas’s death was even more mysterious in real life, with many suspecting that Reilly posed as a doctor in order to poison the clergyman.

Margaret has begun an affair with Reilly’s business partner, Greenburg (Joris Stuyck). As Reilly helps the Japanese move their mechanizations into place and tries to get Margaret evacuated in advance of the attack, he comes across the humble but intrepid Chinese detective, Inspector Tsientsin (David Suchet), who is fiercely loyal to his Russian masters despite their racist abuse to the point that he risks his own life to return to Reilly’s prison cell to execute him for sabotaging the Russian fleet once the attack has begun… only to find that Reilly has escaped thanks to the suggested help of a very James Bond-like cigar.

Like many of Reilly: Ace of Spies‘ depiction of his adventures, there is some factual basis before being totally exaggerated by both Reilly’s claims and the later account of his friend and associate, R.H. Bruce Lockhart. Following his shady marriage to Margaret Thomas, Sigmund Rosenblum adapted Margaret’s family name of Reilly and traveled with a forged British passport to Imperial Russia, where he developed an oil prospectus for the British government and was paid as an informant, likely dealing with famed spymaster William Melville. By 1901, Reilly and Margaret were in the Far East, having traveled from Port Said, Egypt.

Reilly, c. 1905 as he would have looked around the time of his Manchurian spying, and Sam Neill as Reilly.

Characteristically opportunistic, Reilly’s role in Port Arthur was likely as a double agent for the Russians and Japanese as well as a war profiteer, purchasing raw materials, food, medicine, and coal with his business partner Moses Ginsburg as the prospect of a Japanese invasion grew more and more realistic in the Russian-controlled port. It’s suggested that Reilly even stole the Port Arthur harbor defense plans, as depicted in this episode, to help the Japanese Navy navigate the protective Russian minefield and launch their destructive sneak attack that began the war. Following the attack, Reilly is purported to have briefly traveled to Japan with his mistress to collect payment before reconvening with Melville in Paris that summer to once again discuss oil and trying to convince mogul William Knox D’Arcy to yield his Iranian oil concessions to the British rather than the French.

Though Reilly’s role in the D’Arcy affair is often disputed, it is often accepted that he did indeed play a shadowy role in the Russo-Japanese War and, in particular, the Japanese attack on Port Arthur.

Now a fully fledged British agent, Sidney Reilly spends his last day in Port Arthur wearing corduroy, a traditionally British textile. Reilly’s light brown standard-wale corduroy suit keeps him warm while traversing the hills of Manchuria on horseback. (The episode makes February in what is now the Liaoning province look much warmer than its usual below-freezing temperatures during the month!) 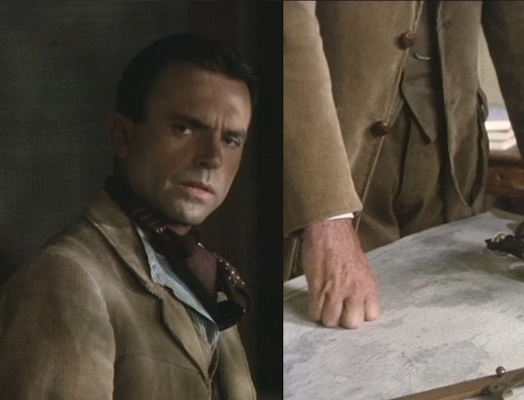 Reilly’s corduroy suit jacket is single-breasted with wide, edge-swelled notch lapels that end high on the front, well above the two-button stance (as though cut for three buttons.) Both front buttons and the two smaller buttons on each cuff are brown woven leather. The swollen front yokes gently slant down from the armpit to the chest.

The jacket’s large bellows pockets on the hips more than make up for the lack of a breast pocket, and each one buttons closed through a pointed flap.

Reilly’s jacket has a double box-pleated back with a box pleat extending down from each double point of the back yoke to the belted waist. Just below the wide back belt is a single vent.

Not much is seen of Reilly’s matching suit trousers as the bottoms are tucked into his boots and the waist is mostly covered by his vest. They have a flat front with tall belt loops around the waist line, but he appears to instead wear them with suspenders (braces), based on the way the baggy trousers are pulled up in addition to the glints of metal seen between the vest and trouser line in certain shots. There is a single back pocket on the right that closes through a button on a pointed flap.

Reilly’s tan waistcoat doesn’t contrast from the rest of the suit as much as an odd vest probably should, but the extra layer serves him well for both extra warmth and a slight notch up in formality to make him look more appropriate for his day in the office. The single-breasted vest has seven tan buttons down the front with the bottom button left open over the notched bottom. The satin back lining is also tan with an adjustable strap across the bottom. It appears to be the same vest he had worn previously with his cream suit while in Baku during the first episode. 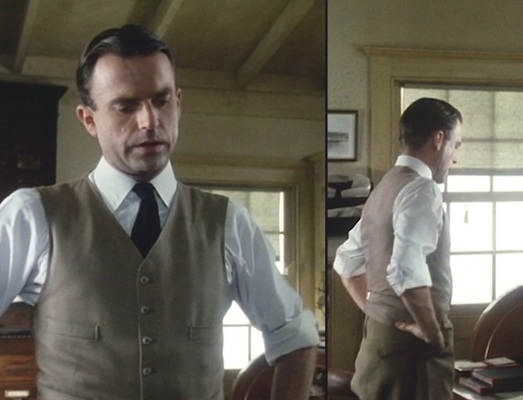 Reilly: The Shipping Agent has a much less intriguing ring to it than Reilly: Ace of Spies.

The tan odd vest has four welted pockets – two on line with the third buttonhole and the lower two between the fifth and sixth buttonholes. Reilly wears his tarnished brass hunter-case pocket watch in the lower left pocket attached to a single Albert style chain through the fifth buttonhole. Under the cover, Reilly’s watch has Roman numerals on a white face and no sub-dial. 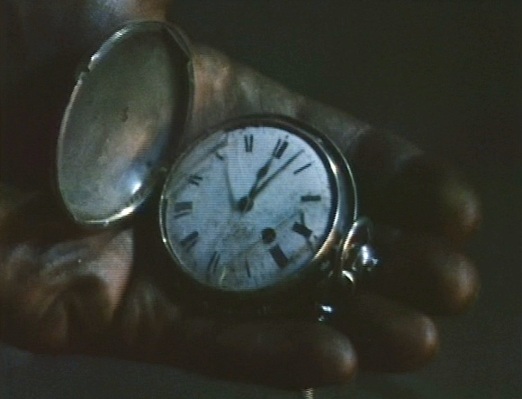 Reilly’s watch at 12:03 a.m., just about 25 minutes before four Japanese destroyers launched their torpedo attack on the Russian fleet.

At the opening of the episode, Reilly is dressed for a day of rigorous riding. He dresses down his already informal suit with a collarless shirt and neckerchief. The cotton shirt has white and blue stripes and 1-button rounded cuffs. There is no stud in the collar band, so it is worn open to reveal a dark brown silk kerchief with white polka dots tied around his neck.

Following his covert daytime meeting with the Japanese Navy, he returns home where he changes into a more professional white shirt and black woven silk tie for a his cover job as a shipping agent. His plain white dress shirt has a large semi-spread collar, front placket, and button cuffs that he unfastens and rolls up when working at his desk. 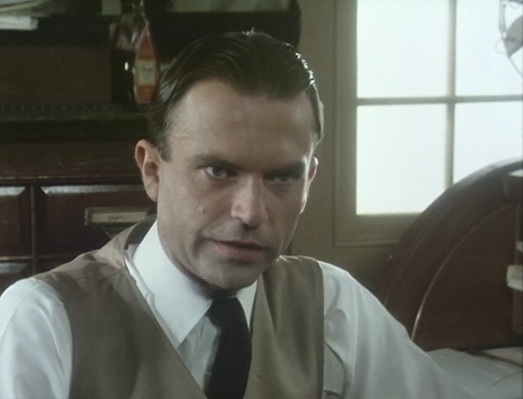 What’s that bottle behind Reilly’s head?

In both town and country, he wears a very dark brown felt fedora with matching grosgrain ribbon. This hat feels somewhat anachronistic as this wide-brimmed, high pinched crown style seems more 1934 than 1904 to me; the fedora had been a popular choice for women’s wear through the early 20th century until Edward VIII, notorious trend-setter that he was as the Prince of Wales, began wearing one in 1924.

Reilly doesn’t stray from the outfit’s base earth tones when supplementing it with functional accessories or outerwear. His boots, gloves, and holster are all dark brown leather, not to mention his brown hat and coat. 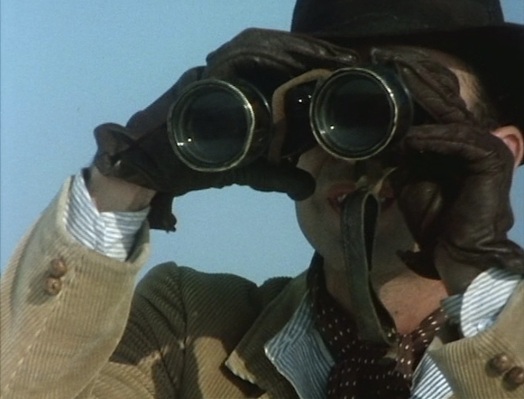 The Ace of Spies just doing what spies do…

Appropriate given horseback as his primary means of transportation, Reilly wears a pair of tall dark brown plain leather riding boots. His trousers are laced below the knee to fasten them tightly against his legs, preventing bunching under the boots.

Reilly conspires with a conspirator.

Not much is seen of the worn dark brown leather shoulder belt that Reilly wears across his torso. It hooks over his left shoulder with a buckle in the center of his torso and, apparently, a holster that falls under his jacket at his right hip. He removes it when at the office.

Reilly shows up at the office well-armed.

Reilly seemingly accepts his fate when called into the Russian official’s office.

The brown suede coat has a 6-on-3 double-breasted front with an additional button under each of the suede revers, bringing the total to eight large dark brown buttons. In addition to the buttons, the coat has a wide belt to tie around the waist. The back has an inverted center pleat and a long single vent. 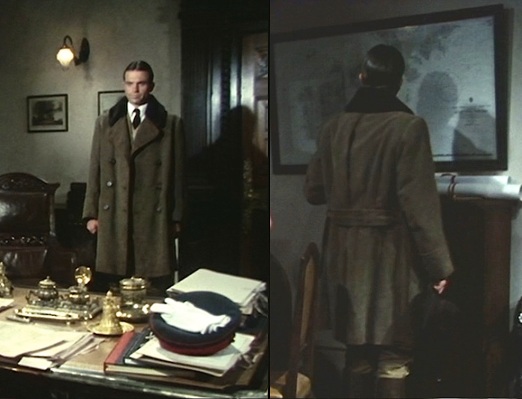 Looking for a more casual look… maybe one more appropriate for a day spent riding? Reilly swaps in a striped collarless shirt and a brown polka-dot silk kerchief around his neck. 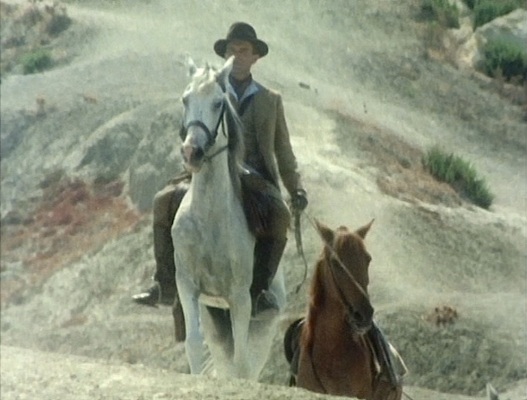 . This outfit is featured throughout the second episode, “Prelude to War”.

It’s a bad situation, Colonel, but I don’t see why we shouldn’t make money out of it.