Bob Woodward had only been at The Washington Post for nine months when he received an assignment in June 1972 to look into the arrests of five men who had been caught breaking into the DNC office at the Watergate complex in Washington, D.C. As the story continued to build over the following months, Woodward and Carl Bernstein relentlessly investigated for a series of Post articles that would expose an unprecedented level of government corruption that led to the resignation of President Richard Nixon.

August 1974 saw not only Nixon’s resignation but also delivery of the first draft of William Goldman’s screenplay adaptation of All the President’s Men, Woodward and Bernstein’s written account of their reporting. Several drafts and newsroom visits later, filming began in D.C. with Dustin Hoffman as Bernstein and Robert Redford as Woodward. Although the book covered the duration of Nixon’s presidency until his eventual resignation, the film ends with Nixon’s scandal-tarnished second inauguration in January 1973, an effectively eerie finale that reinforces the significance of media persistence and government transparency.

As controversy swirls around media relations in the wake of “fake news”, Woodward and Bernstein’s work with The Washington Post remains a sterling example of the importance of dedicated journalists and a free press.

As a tireless reporter working full shifts in the newsroom and taking late night meetings in parking garages over the course of a hot D.C. summer, Bob Woodward would have benefited from clothing bridging the gap of professionalism and comfort. Redford’s Woodward has a habit of mixing the elements of his outfits, mostly earth-toned jackets and trousers with blue patterned shirts and dark ties, all worn with the same brown belt, brown derby shoes, and black socks.

One of Woodward’s jackets is a  beige sportcoat in a lightweight cotton that wrinkles easily, visually establishing Woodward’s hardworking reputation.The notch lapels are appropriately wide for the ’70s without stretching too far into disco width, and the edges are swelled. The single-breasted front closes with two buttons, which Redford typically wears open, and there are three buttons on the end of each sleeve.

In addition to the welted breast pocket, the sport jacket has patch pockets on the hips with squared flaps. The shoulders are padded, and the back is split with a long single vent.

A tense elevator ride leads to an office breakthrough.

The shirt that Redford most frequently wears with this jacket is navy and gold check over a white ground, worn with a wide navy textured tie in a four-in-hand knot. The navy check and tie nicely interact while the shirt’s gold interacts with the earth tones of both this outfit and the light brown pinwale suit that he also wears. The shirt has a spread collar with long points, front placket, breast pocket, and rounded single-button cuffs that he often wears rolled up his forearm for long days in the office.

Woodward briefs his editors after his first meeting with “Deep Throat”.

Woodward wears a different checked shirt for brief later scene that finds Woodward and Bernstein chatting with executive editor Ben Bradlee (Jason Robards). The details and fit of the shirt are the same but with a smaller scaled blue check. He also wears a different tie, comprised of navy-dotted cream ovals over an old gold ground.

Woodward typically wears a pair of olive brown cotton chino trousers with this sportcoat. They have on-seam side pockets, jetted back pockets, and plain-hemmed bottoms. The belt loops accommodate a wide brown leather belt with a steel single-prong buckle.

As the weather gets cooler when the investigation extends into the fall, Woodward sticks with brown trousers but swaps out the olive chinos for a pair of darker brown flat front corduroys, worn with the same belt.

…although meetings with Bradlee don’t always tend to end with Woodward and Bernstein smiling.

A brief scene that provides some comic relief finds Woodward and Bernstein visiting someone they believe to be a cooperative employee of the Committee to Re-elect the President but turns out to be a similarly-named woman in fervent support of their investigation. For this visit, Woodward wears a pair of navy blue flat front trousers with plain-hemmed short break bottoms that nicely showcase his brown leather plain-toe derby shoes that match his mid-brown leather belt.

“Oh, I don’t work at the Committee to Re-elect the President. I work at Garfunkel’s… in the accounting department.”
Woodward and Bernstein’s promising lead, though courteous, turns out to be a dud.

Woodward seems to wear exclusively black socks despite the color of his trousers. As Hardy Amies observed in his 1964 ABC of Men’s Fashion: “Young men often wear black socks with almost everything. I do not find this objectionable. It has a rather pleasant insouciant air.”

Both of his onscreen accessories are Robert Redford’s own personal items. On the third finger of his right hand, he wears the silver imprinted ring that he received as a gift from representatives of the Hopi tribe in 1966 and has appeared in most of his movies. He also wears his own stainless steel Rolex Submariner 1680 that he wore in many of his 1970s films, including The Candidate (1972).

While I don’t believe that Woodward’s watch at the time was a Rolex (just from looking at contemporary photos), he certainly adopted wearing what appears to be a two-tone DateJust later in life. 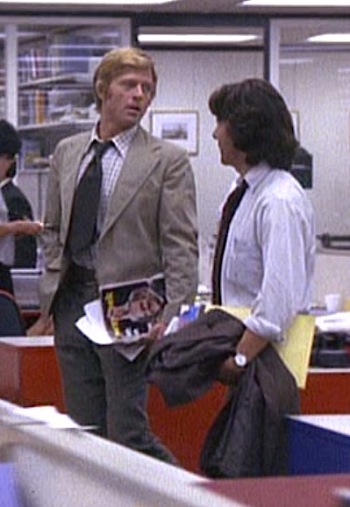 Robert Redford and Dustin Hoffman as Bob Woodward and Carl Bernstein, respectively, in All the President’s Men (1976)

As Bob Woodward, Robert Redford finds an intersection of professional and comfortable that also rings very true for a young, ambitious, and hardworking reporter in the 1970s.

Check out the movie and read Bernstein and Woodward’s book!

The money’s the key to whatever this is.