Fred Astaire and Cyd Charisse in The Band Wagon (1953)

On National Dance Day (July 27), who better to feature on BAMF Style than that most elegant, sophisticated, and talented of dancers, Fred Astaire. In particular, let’s look at an iconic dance sequence in The Band Wagon, that most homaged and visually spectacular of Astaire’s prolific filmography.

We encounter song and dance man Tony Hunter as he gets out his aggression about the Faustian creative direction of what was supposed to be his latest lighthearted musical comedy as well as his contentious relationship with his co-star, virtuoso ballerina Gabrielle Gerard (Cyd Charisse). Having walked off the set of the show, he takes out his anger in an uncharacteristically destructive tantrum, ravaging the sheet music, books, and records in his hotel room, forced to a halt when he encounters an “unbreakable” record of Micaëla’s aria from Carmen. Interrupted by a guest at the door, he throws the record to the ground only to be shocked to be greeted by the very object of his furious scorn, an apologetic Gabrielle: “Lady, you must have the wrong apartment!”

Tony’s attitude toward Gaby is softened by her genuine appreciation for the art he keeps in his hotel room and finds himself moved by her tearful insecurities and frustrations with the show, and the two dancers decide to put their issues aside and talk through how to make the production best for all involved.

Gaby: Tony, can you and I really dance together?
Tony: I don’t know… let’s find out!

In the hopes of finding out their performance chemistry, Tony and Gaby embark on a carriage ride that spirits them away to a well-lit patio in Central Park populated only be dancing young couples and a five-piece band serenading them. The two silently stroll onto a secluded path, where they find themselves in each other’s arms for the iconic “Dancing in the Dark” dance sequence against the romantic backdrop of the New York City skyline at night.

Tony and Gaby may be dancing in the dark, but he’s dressed in his brightest outfit yet! This natty summer-friendly ensemble consists of a beige tailored odd jacket with yellow shirt, coordinating tie, off-white trousers, and two-tone spectator shoes, accessorized as usual with colorful silk pocket square, askew tie clip, and silk sash for a belt. It’s the sort of outfit that doesn’t come to one naturally, but Fred Astaire’s successful execution supports his maxim that dressing well is like putting on a show as both require much rehearsal in order to get right.

Tony’s beige jacket is made from a lightweight material with imperfect slubbing indicative of either raw silk, linen, or a blend of both summer-friendly fabrics. The single-breasted jacket is perfectly tailored with the notch lapels rolling to a two-button front that fastens exactly at Fred Astaire’s natural waist, cleanly dividing the tie on the top half with the trousers on the bottom half.

As Alan Flusser wrote in Dressing the Man, “the placement of the coat’s waist button should divide the body so that the torso and legs appear at maximum length,” sage wisdom in general but particularly handy for a graceful hoofer like Fred Astaire.

“Oh, that’s right, dancers shouldn’t smoke,” Tony sarcastically reminds himself after offering her his deck of Chesterfields. “You mind if I do?”

The beige jacket has short double vents, roped sleeveheads, and three-button cuffs that appear to be downsized versions of the mother-of-pearl or pearlesque plastic sew-through buttons used on the front. The hip pockets are flapped with a right-side ticket pocket also covered with a flap.

Tony’s yellow cotton shirt delivers a welcome colorful brightness to the look without contrasting too much against his neutral-toned jacket, trousers, and tie. While most gents almost certainly have an oxford-cloth button-down shirt in white, light blue, and possibly even pink, an OCBD in yellow cotton is an inspired and refreshing alternative, available from retailers like IZOD. Per Flusser, a yellow shirt’s “champagne sparkle can impart an élan and vitality to any suit from the browns through the grays to navy.”

The shirt has a button-down collar, front placket, and rounded barrel cuffs that close with a single button. The beige micro-textured silk tie is knotted in a perfect four-in-hand and held in place with a gold tie clip slotted in place just above the jacket’s buttoning point.

Tony and Gaby find their attitudes softening toward the other.

Fred Astaire’s appreciation for perfect tailoring gives him the sartorial freedom to experiment with flashier color palettes like this. On its own, every garment fits perfectly and, together, they harmonize beautifully with the jacket’s buttoning point neatly separating the shirt and tie on the top half from the full-fitting white trousers on the bottom as their elegant reverse pleats flare out from Astaire’s waistband through his legs to the bottoms finished with turn-ups (cuffs). 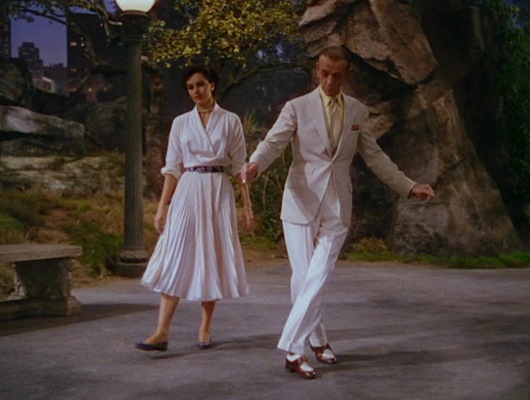 Fred Astaire has often been cited along Cary Grant as the best dressed American leading men, though while Grant often played it safe with elegant, simple, and timeless suits, Astaire embraced a more casual and colorful—but never ostentatious—approach with a breezy, knockabout charm that contrasted with his early on-screen image of the top hat, white tie, and tails, preferring “tailored sport jackets, colored shirts and slacks—the latter usually held up by the idiosyncratic use of an old tie or silk scarf in place of a belt.”

“In the way of belts, Astaire likes to use silk handkerchiefs—purely for utilitarian purposes rather than theatrical. He has a 31-inch waist and loses pounds when he is dancing. The resilient silk allows him to draw his pants right.” Astaire himself explained this practice to GQ during a 1957 interview: ‘I used to use old neckties for the same purpose but the handkerchiefs are better.’ At home he will use a belt, usually shoving the buckle to one side, ‘simply to get it out of the way.'” Similar to his pocket square, Astaire’s silk sash belt appears to be red with a speckled gold center band.

Like his entertainment contemporary Bing Crosby, Astaire seemed to prefer socks that screamed from his ankles, though his mustard hosiery with this outfit is comparatively muted when measured against the blue and red socks he wears elsewhere in The Band Wagon.

Perhaps the most essential item in the dancer’s wardrobe are his shoes, and Astaire wears a natty pair of burgundy and white spectator derbies. The outsoles and the apron-style toe-box are burgundy leather with a burgundy strip extending over the back of each elegantly long white leather vamp for the forward three of the five lace eyelets. The laces are burgundy to match the darker portion of the shoes.

It’s difficult to find modern-made spectator shoes that aren’t wingtip oxfords, though Stacy Baldwin seems to at least take a retro-minded approach with footwear like these unique two-tone derbies and these brown-and-tan cap-toe oxfords.

Promotional photo of Cyd Charisse and Fred Astaire for The Band Wagon.

Tony wears his (and no doubt Astaire’s own) signature jewelry of a gold curb-chain bracelet on his left wrist and a gold signet ring on his right pinky. 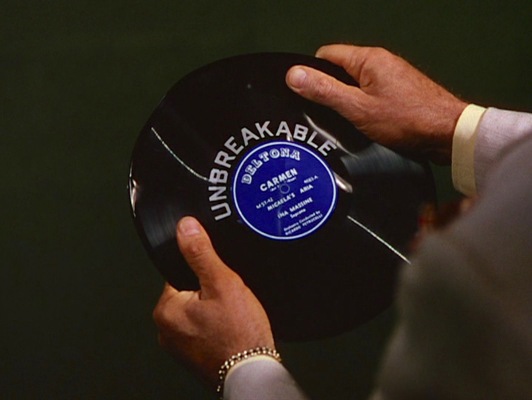 The dapper dancer was known for his wardrobe both on- and off-screen, and the marvelous color cinematography by Harry Jackson (who died four days before the film was released) makes the most of Mary Ann Nyberg’s Academy Award-nominated costume design.

The yellow shirt makes a brief reprise just before the show returns to New York for its Broadway opening, represented on screen with the famous “Girl Hunt” ballet in the spirit of Mickey Spillane. Outside the stage door, Tony and Gaby run into each other with the former wearing his previously seen yellow shirt but with a black-and-white plaid tie. 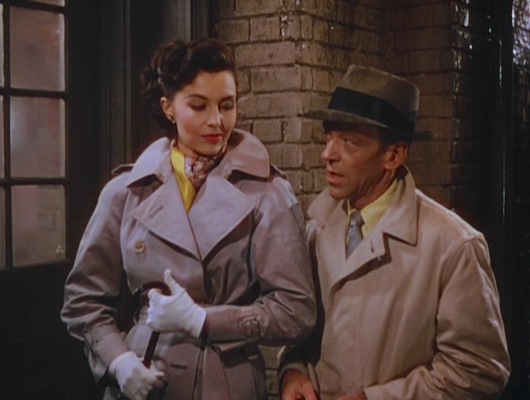 Gaby and Tony share one last moment before taking the stage.

As it’s raining, the rest of his outfit is covered with a knee-length khaki raincoat with a covered fly, plain cuffs, and large patch hip pockets with flaps. Tony tops it off with a taupe brown fedora that has a wide black ribbed grosgrain silk band and coordinating black grosgrain edges. 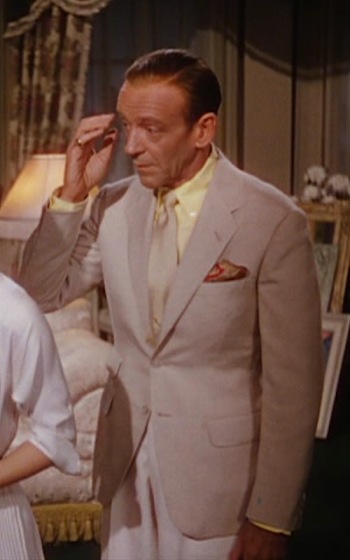 Fred Astaire as Tony Hunter in The Band Wagon (1953)

Fred Astaire blended elegance and interesting dressing both on- and off-screen, dressing brightly for dancing in the dark with this neutral-toned and beautifully tailored outfit accented with pops of color in all the right places.

As the character of Tony Hunter was dressed consistent with Fred Astaire’s own personal style, I highly recommend reading his 1957 interview with GQ that explores the entertainer’s sartorial approach in his own words: “I never think of myself as spic and span or all duded out—just as someone who wants to be comfortable and satisfy his own taste.”

Check out the movie. Musicals are not among my favorite movie genres, but the always charming Fred Astaire and his colorful supporting cast, the stunning color cinematography, and impressive song and dance numbers featuring some of the era’s top talent make The Band Wagon a winner.

The Band Wagon‘s signature dance number, Astaire and Cyd Charisse’s “Dancing in the Dark” performance, was paid homage by a white-suited Steve Martin and Gilda Radner in the April 22, 1978, episode of Saturday Night Live.

Here we are, the only animals given the greatest means of communication—human speech—and all we do is snarl at each other.