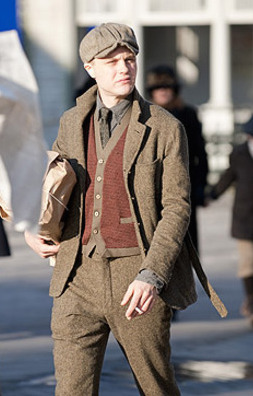 Michael Pitt as Jimmy Darmody on the set of Boardwalk Empire while filming “The Ivory Tower” (Episode 1.02).

Michael Pitt as Jimmy Darmody, ambitious war veteran and “half a gangster”

Michael Pitt as Jimmy Darmody in the seventh episode of Boardwalk Empire, “Home”.

Today in 1933, Prohibition officially ended in the United States with the ratification of the 21st amendment. To celebrate this momentous and wonderful occasion, we look again at Boardwalk Empire.

Michael Pitt as Jimmy Darmody, rising bootlegger looking to be more than “half a gangster”

Jimmy Darmody, a young protagonist of Boardwalk Empire, is presented as an early protege and eventual foil of Enoch “Nucky” Thompson, the Atlantic City treasurer. Although Thompson is clearly based on Enoch “Nucky” Johnson, the real life boss of Atlantic City during the Prohibition era, Darmody was invented for the show and, due to an excellent performance by Michael Pitt and brilliant storytelling from the show’s writers, helps to bring an interesting era in American history to life through the eyes of a relatable, yet troubled, character. END_OF_DOCUMENT_TOKEN_TO_BE_REPLACED